Venezuelan game pays off for Hogs at the line 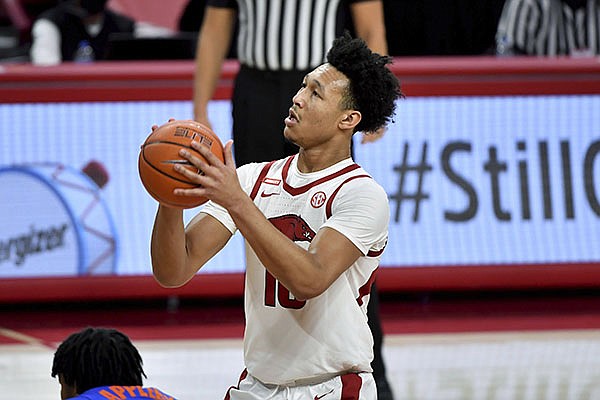 FAYETTEVILLE — Clutch free-throw shooting has been a key to the University of Arkansas basketball team extending its SEC winning streak to seven games.

Arkansas Coach Eric Musselman said the Razorbacks have benefited from a drill — which they use this season at the end of practice to simulate the pressure of hitting free throws late in games — that he picked up while coaching the Venezuelan National Team from 2011-13.

If the Arkansas Razorbacks maintain their current free-throw accuracy of 74.8%, it will be only the 10th time since the UA media guide lists season-by-season statistics going back to the 1951-52 season that a team has shot higher than 74%. Here is a rundown:

In SEC play, Arkansas has been even better. The Razorbacks have hit 76.6% of their free throws in conference games to rank second behind Auburn (77.1.%).

If the Razorbacks maintain their current pace, it will be only the 10th time in the past 69 seasons that they have shot 74% or higher.

Musselman credits the practice drill he added this season with helping the Razorbacks focus on their free-throw shooting.

“We do a drill that these guys probably are so sick of,” Musselman said after Arkansas shot 20 of 23 at Missouri on Saturday. “Every time at the end of practice we have a free-throw game that I picked up when I was with the Venezuelan National Team, and these guys absolutely hate it.

“It’s a free-throw pressure game that sometimes takes us quite a bit of time to finish practice up. But it has really, really helped us from the foul line.”

Moody said the drill starts with two or three players spreading out on the six goals on the practice court.

“Everybody goes around, and you have to hit one and then the next person has to hit the second one and then the third one, and we go all the way up to eight,” Moody said. “Then [going back down to] seven, then six [to zero].

“So it’s a lot of pressure on each and every shot.”

If the Razorbacks miss free throws in the drill, they have to do push-ups and run sprints.

“And if we’re not making them, we’ll be there all night,” Moody said. “I promise you.”

Arkansas hit 5 of 6 free throws in the final 1:51 at Kentucky, including two makes by Tate with 4.3 seconds left for the game-winning points after the Wildcats had taken an 80-79 lead.

The Razorbacks hit 5 of 6 free throws in the final 1:53 of overtime at Missouri, with Moody hitting 4 of 4 — including two with 13.6 seconds left to clinch the victory.

“I don’t even think I was watching when he shot,” Musselman said. “Because I just assumed he was making them both.”

“We’re just putting ourselves in that late-game situation,” Moody said. “Which really comes back to help like [Tate] did [at Kentucky], like I did late [at Missouri], and like Justin [at Missouri]. We’ve been there before.”

“It was funny, because Jalen said, ‘After I make this free throw, make sure we get into what we work on every day,’ which is our prevent defense,” Musselman said. “Because we’re supposed to match up full court right away and react immediately upon a ball going through the net.

“So I think his ability to coach the team and remind them to be in our prevent, and the confidence that he had to say that I’m going to make the shot and then we’re going to get into prevent was pretty unique in a college timeout.”

“JD told Coach [Anthony] Ruta he felt more pressure in our free-throw shooting game post-practice than he did in a game,” Musselman said. “That’s what you try to simulate.”

“At times we struggle with the game that we play at the end of practice, but sometimes we do very well,” Davis said. “For sure it’s helped out a lot.”

Musselman said he came up with the drill because the Venezuelan National Team struggled from the line.

“We weren’t very good free-throw shooters,” he said. “I wanted to try to put pressure on the players.”

“When we’re in an end-game situation, I feel like I’ve been there before,” Moody said. “Every day, almost.”