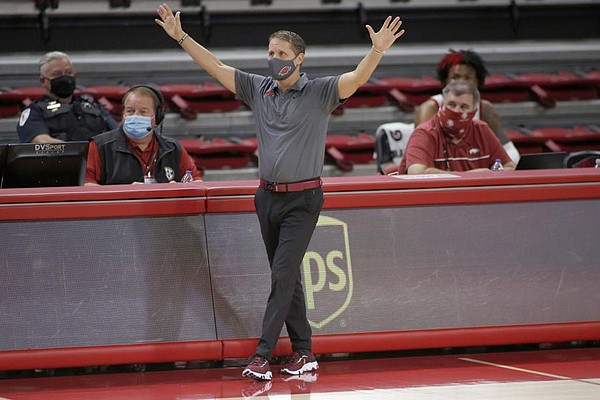 FAYETTEVILLE — The men's basketball game between No. 24 Arkansas and Texas A&M will not be played as scheduled Saturday due to positive covid-19 cases and quarantines within the Aggies' program.

No makeup date has been announced for the game that was scheduled to be played in College Station, Texas. It will be Texas A&M's sixth consecutive game that has been postponed, increasing the likelihood that some of the Aggies' games will not be made up this year.

"We found out while boarding the bus to travel to College Station today that our game tomorrow was canceled," Razorbacks coach Eric Musselman said in a release. "Our players are devastated that they do not get to compete."

Dan Leibovitz, the SEC's associate commissioner for basketball, said Arkansas received the SEC's permission to seek a nonconference game, but a source told the Arkansas Democrat-Gazette late Friday that the Razorbacks were unable to find an opponent on such late notice and won't play this weekend.

Arkansas (17-5, 9-4 SEC) has had two games called off against Texas A&M (8-7, 2-6) and the chances are slim that both games can be made up before the SEC Tournament that is scheduled to begin March 10. The Aggies were scheduled to play Feb. 6 in Fayetteville.

If the Razorbacks are unable to play Texas A&M twice before the tournament, it would leave Arkansas under the NCAA's maximum number of allowable games (27) during the regular season.

Arkansas' next scheduled game is Wednesday against No. 8 Alabama at Bud Walton Arena in a matchup of the teams with the SEC's two best records. Tipoff for that game is scheduled for 8 p.m.

The Crimson Tide (17-5, 12-1), who are scheduled to host Vanderbilt on Saturday, defeated the Razorbacks 90-59 on Jan. 16 in Tuscaloosa, Ala. Arkansas has not lost a conference game since the trip to Alabama.

The Razorbacks defeated Florida 75-64 earlier this week to extend their winning streak to seven games in SEC play.

With no game this weekend, Arkansas will have at least eight days between games. The Razorbacks are 4-0 this season when they have four or more days to prepare for an opponent, and are 11-0 in such games under Musselman.