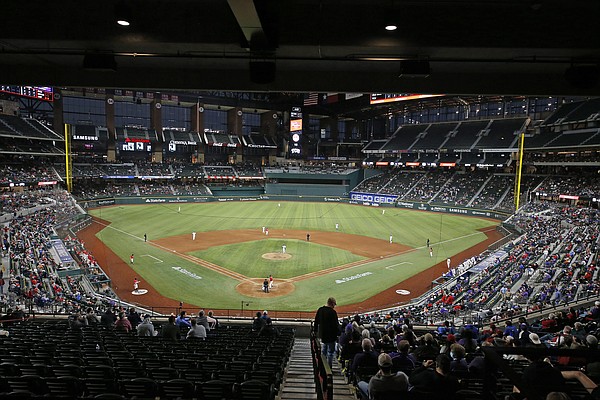 TELEVISION The game will be streamed on FloSports.com, which requires a subscription.

NOTABLE The start time will be delayed until 7:45 p.m., 45 minutes later than originally scheduled due to the length of games earlier in the day at the site....Arkansas defeated Texas Tech 13-9, and Texas lost 8-3 to Mississippi State on the first day of the College Baseball Showdown....The Razorbacks and Longhorns are playing each other for the seventh time since the start of the 2018 season. Arkansas swept three games against Texas in 2018 — including a win at the College World Series — and the teams split a midweek series in Austin in 2019. The Longhorns won last season at the Shriners College Classic in Houston....Arkansas outfielder Christian Franklin and second baseman Robert Moore are among 55 players on the preseason watch list for the Golden Spikes Award that is given to the national player of the year….The Razorbacks and Longhorns are among six teams playing in the inaugural College Baseball Showdown that is hosted by the Texas Rangers. Other participants include Ole Miss and Mississippi State from the SEC, and Texas Tech and TCU from the Big 12….Arkansas pitcher Peyton Pallette is making his first career start. Pallette appeared in 4 games last season when he allowed 1 run over 5 2/3 innings….Texas starting pitcher Tristan Stevens pitched against the Razorbacks in 2019 when the Longhorns won 7-6 in the second game of a two-game series in Austin. Stevens retired the only two batters he faced that night. Stevens led Texas with 23 appearances in 2019 when he had a 5.31 ERA....Arkansas third baseman Jacob Nesbit (Coppell), left fielder Braydon Webb (McKinney), relief pitcher Kole Ramage (Southlake) and infielder/outfielder Zack Gregory (Keller) are from the Dallas-Fort Worth area….The Razorbacks are playing in an MLB stadium for the fourth time in six seasons. Arkansas played at Houston’s MinuteMaid Park in 2016 and 2020, and at Kansas City’s Kauffman Stadium in 2017….Attendance will be capped at around 15,000 each day Globe Life Field.