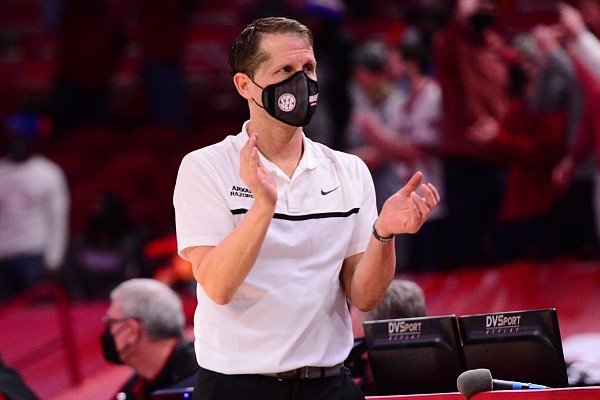 FAYETTEVILLE — Arkansas’ men’s basketball team moved up four spots to No. 20 in the Associated Press Top 25 poll that was released Monday.

The Razorbacks won their only game last week, defeating Florida 75-64 in Bud Walton Arena. Their previously scheduled road game against Texas A&M on Saturday was postponed due to a combination of positive tests, contact tracing and subsequent quarantining of individuals within the Aggies’ program.

Monday marks the first time since March 2 and March 9, 2015, that Arkansas is ranked in back-to-back AP polls. The Razorbacks’ No. 20 ranking is the program’s highest since the March 2, 2015, poll.

Arkansas is on a seven-game SEC winning streak as it opens a big week at home. The Razorbacks are scheduled to host No. 6 Alabama on Wednesday in the first meeting between AP Top 25 teams in Bud Walton Arena since 1998, and LSU on Saturday.

Because the Texas A&M game was called off, Arkansas will have seven days off prior to playing the Crimson Tide. It is the Razorbacks’ second stretch this month of at least six days without a game.

Arkansas is 11-0 on four-plus days of rest under second-year coach Eric Musselman.

Tipoff is set for 8 p.m. on Wednesday, and the game will air on ESPN2. Arkansas-LSU is scheduled to begin at 1 p.m. Saturday on either ESPN or ESPN2.

Other SEC teams in the poll are No. 24 Missouri and No. 25 Tennessee. LSU received 32 votes in this week's poll.