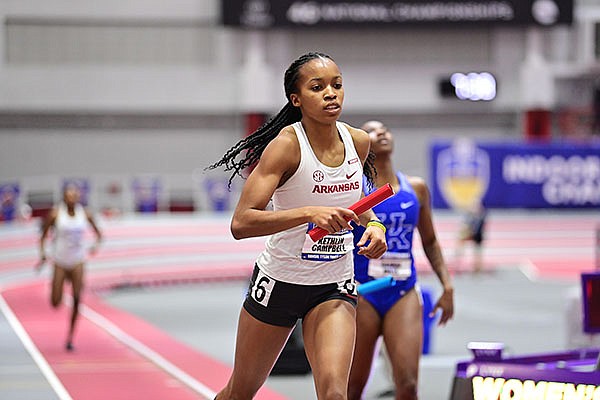 Arkansas' Kethlin Campbell runs the anchor leg of the mile relay during the SEC Indoor Championships on Saturday, Feb. 27, 2021, in Fayetteville.

The Razorbacks won the SEC indoor meet for the seventh consecutive season with a team score of 141 points. Florida finished second in the team standings with 81 points.

Arkansas won the conference indoor meet for the 11th time. Lance Harter, the Razorbacks’ head coach, won an SEC title for the 40th time in the three sports he coaches — cross country, indoor track and field, and outdoor track and field.

Arkansas has won 20 of the last 22 SEC meets in the three sports.

The Razorbacks won two events Saturday. Krissy Gear won the mile with a time of 4:34.72, and Arkansas’ mile relay team of Morgan Burks-Magee, Rosey Effiong, Shafiqua Maloney and Kethlin Campbell edged Kentucky with a meet-record time of 3:28.5. Magee was a late addition to the team and replaced Paris Peoples, who experienced muscle tightness after running the 400 earlier in the day.

Arkansas had second-place finishes by Katie Izzo in the 3,000 and 5,000 meters, Jada Baylark in the 60-meter dash and Daszay Freeman in the 60 hurdles.