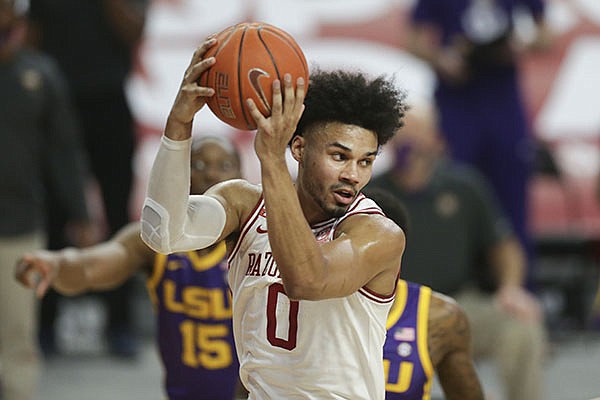 Arkansas forward Justin Smith (0) grabs a rebound during a game against LSU on Saturday, Feb. 27, 2021, in Fayetteville.

FAYETTEVILLE — University of Arkansas forward Justin Smith has an understated quality about his game. He's not super flashy — other than his array of windmill and thunder dunks — but manages to fill up the stat sheet on most nights.

Smith did it again Saturday with a team-high 19 points and 10 rebounds in the Razorbacks' 83-75 win over LSU.

The 6-7 graduate transfer notched his third double-double of the season. More importantly, Smith's last two double-doubles came in the last two games, as Arkansas avenged lopsided losses to Alabama and LSU administered early in conference play when Smith was still on the mend from ankle surgery.

Smith hit a three-pointer, his first since an overtime win at Missouri on Feb. 13, and added a blocked shot, an assist and a steal.

"The last couple of games, I guess I've been playing pretty well," Smith said. "I'm just kind of going with the flow, just figuring out different ways to impact the game."

Asked about Smith's impact on the game, guard JD Notae said, "Just his versatility. He can guard 1 through 5. If his offense is going, then hey, good luck."

Smith had an uncontested dunk on a feed from Moses Moody in the paint to pull Arkansas within 46-44 early in the second half. He threw down a savage windmill dunk, again on a feed from Moody, as an exclamation point in the final seconds of the game.

"My teammates said they've been waiting on that windmill all year, so I had to give it to them on senior day," Smith said. "Overall, I mean, I'm really only able to do what I do because of my teammates. They give me the ball in the right spots and are willing to make that extra pass."

Guard JD Notae not only scored 18 points, his highest total since compiling 19 in a win over Ole Miss on Jan. 21, he also gave LSU guard Javonte Smart fits in the second half in a battle of players who wear No. 1.

In at point guard with Jalen Tate in foul trouble, Notae picked Smart's pocket in the backcourt and converted the steal into a left-handed layup to draw Arkansas into a 46-46 tie at the 15:38 mark for the first tie since 2-2.

Later, Notae deflected a Smart pass, also in the backcourt, then was fouled by Josh LeBlanc as he retrieved the loose ball. Notae turned it into a three-point play after he made the first free throw and missed the second. He snagged the loose-ball rebound, was fouled on a shot by Mwani Wilkinson and made both free throws for a 60-53 Arkansas lead.

"In practice coach told us, 'Hand in the eyeball, active hands.' So, it just paid off," Notae said.

LSU dominated the glass in the first half with a 27-22 advantage that included nine offensive rebounds and eight second-chance points to seize a 37-32 halftime lead.

Arkansas reversed the board trend in the second half, winning 23-12 in that category and limiting the Tigers to three offensive rebounds.

"We've said it since the Alabama game, you can't beat LSU if you don't outrebound them," Coach Eric Musselman said. "So I thought our rebounding in the second half was absolutely great."

Arkansas won the rebounding battle 45-39 overall and outscored the Tigers 13-10 in second-chance points.

"Second half we got off to a decent start and then it got away from us. Our rebounding let us down. Our defense let us down. Our offense became a little bit bogged down. Arkansas is a great team and took advantage of that."

Both coaches gave shout-outs to the Walton Arena crowd, which again had a boisterous student section that helped the assembly of 4,400 sound louder than it looked.

"Incredible atmosphere in Bud Walton again today!" Coach Eric Musselman wrote on his Twitter account, adding a special thank you to the students for showing out.

LSU Coach Will Wade said his club was "locked in and ready to go," but felt the intensity of the crowd.

"This is a hostile environment now," Wade said. "They had quite a few people in here and their student section was rocking. This wasn't a real SEC atmosphere, but it was a lot closer."

Asked by a reporter whether the big atmosphere was bolstered by "piped-in noise," Wade responded, "No, they had a lot of students here."

LSU forward Darius Days picked up a couple of fouls in the first half and wound up with a completely different stat line than in the first meeting between the teams. Days was 0 of 8, all from three-point range, did not score, and contributed 2 rebounds and 2 assists.

"Jaylin Williams did a really good job on him," Arkansas Coach Eric Musselman said. "You know, we knew he was a great three-point shooter, and he also just missed some as well."

"He's gonna make those most of the time," Wade said. "For whatever reason, he struggled a little bit today. Off-hand, I think out of the eight looks, we'd sign up for him to take seven or eight of those looks."

Even though the Razorbacks have one more home game scheduled for Saturday against Texas A&M, the program celebrated senior day after beating LSU.

Coach Eric Musselman presented each of the seniors a framed jersey after the Razorbacks won their ninth consecutive home game.

In addition, each of the honorees had video tributes made to them. Former Razorback Mason Jones spoke up for student coach Khalil Garland, the former celebrated signee who had to give up his basketball career due to a medical issue.

"The impact you have left on people, not only me but the people around you, is the purpose that God has for you," Jones said.

• Arkansas made its first seven field goals in the second half: three by Justin Smith; one each from Davonte Davis, JD Notae and Jaylin Williams; and a three-pointer by Moses Moody to turn a 39-32 deficit into a 53-48 lead.

• Arkansas junior Desi Sills connected on a three-pointer when the Razorbacks were struggling offensively to cut LSU's lead to 30-25 with 5:24 left in the half. It was Sills' first made three since going 1 of 2 at Oklahoma State on Jan. 30.

• Arkansas reached the double bonus in the second half on LSU's 10th foul at the 11:24 mark, while the Razorbacks still had just one foul.