State of the Hogs: Find the freaks 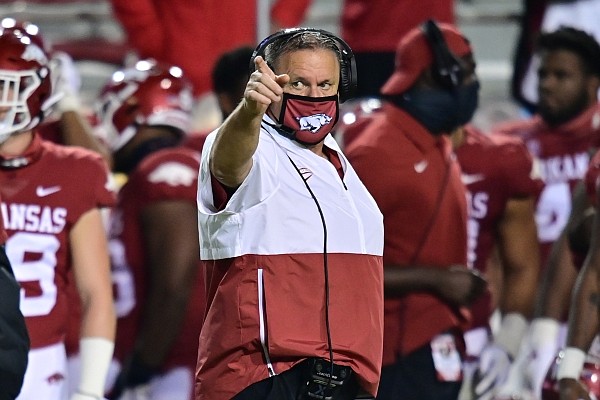 Arkansas coach Sam Pittman points toward the field of play during a game against Tennessee on Nov. 7, 2020 in Fayetteville.

The honeymoon continues for Sam Pittman. Never has a coach with just three victories been embraced in such grand fashion at Arkansas.

Frank Broyles won only four games in 1958 during a 4-6 season. But since they were the last four games and all in the Southwest Conference, there was much optimism for his second season at Arkansas.

Pittman will be hard pressed to duplicate what Broyles did in years 2-4. The Hogs won or shared the SWC title each year.

But there is a great feeling that things are heading in the right direction for Pittman. The Hogs return all but two key players from his first team.

Quarterback Feleipe Franks and nose tackle Jonathan Marshall are the lone coveted seniors headed to the NFL and declining a shot at another year of eligibility under the NCAA’s unique covid-19 relief.

That would leave Pittman with 20 returning starters, unprecedented in modern times at Arkansas. In fact, nine others made multiple starts last season.

Experience is a huge factor in college football. But talent often trumps experience in a league that is just a half step below the NFL.

One of my most vivid memories as a young reporter came just after graduating high school when assigned to help with the summer football tabloid at the Arkansas Gazette. That was a massive publication with breakdowns in every district race of Arkansas high school football.

After collecting information from every coach in one district, I settled on the favorite — a team that returned all 22 starters. A phone call to the coach produced a stunning admission.

“You don’t want to favor us,” he said. “I don’t want any of these players back. Pick someone else. We haven’t won a game in two seasons. Please don’t write this, but we are toothless Tigers.”

Turns out, the coach was right. That team — and they were Tigers — didn’t win a district game the next season, either. Fortunately, they were picked at the bottom in the printed forecast and form held.

That’s not the problem for Pittman. These Hogs have tusks, but they need to sharpen and grow them some in the offseason.

What does Pittman need to break form in the SEC West? It comes down to pass protection on both sides of the ball. Bobby Petrino explained football in the simplest terms in my first one-on-on interview in the winter of 2008.

The 2020 Razorbacks were not good in either area. The offense allowed 34 sacks and the defense had only 14. That computes to a 3-7 record.

There are multiple ways to produce sacks, but most of them happen when there are breakdowns on the edge. Can your offensive tackles hold the edge? Can your defensive ends and blitzers crash the edge?

Experience and maturity helps with pass protection. The Hogs return left tackle Myron Cunningham, who was terrific over the second half of the season, along with alternating right tackles Noah Gatlin and Dalton Wagner. They have everyone back in the other offensive line spots, too. They will all improve, but it's those tackles that are critical to setting the pocket.

Those three are the front-runners to anchor the outside posts on the offensive line next year, but there are fascinating prospects with redshirt freshman Marcus Henderson and Charlotte transfer Ty’Kieast Crawford.

Crawford is a man mountain. The 49ers listed him at 6-5, 325 pounds, but he told recruiting guru Richard Davenport last week that he is 6-8, 345. Even if the truth is somewhere between, Crawford is a freakish prospect. He played right tackle for the 49ers.

Henderson was listed at 6-5, 284 when he reported for practice last summer. That's his listed weight on the school roster page now. But one source said he's close to 300 now and still gaining. He could be at 310 by next fall. He is gifted.

Freakish is what former Razorback star lineman Frank Ragnow predicted will be the kind of talent Pittman assembles at Arkansas.

“The players he recruits will be freaks," Ragnow said. "He will recruit talent and they will want to work hard.

“Coach always said the same thing and it would make me laugh: 'I ain’t a good ball coach, but I recruit freaks.'"

That’s what you need on defense, too. Checking the Arkansas sack records produced a list of for sure freaks. Guys like Wayne Martin, Steve Conley, Trey Flowers, Chris Smith and Jake Bequette had a freakish combination of size and ability to run. Almost all were good basketball players.

My first sight of Ragnow was a high school video of a slam dunk after a dash from halfcourt. It was a wow moment.

There are few of those types on the Arkansas roster now. The best of the youngsters might be Eric Gregory, a part-time starter last year as a redshirt freshman. Gregory leads the returnees with 2.5 career sacks, all last year.

One of the best lines about Gregory came from former defensive end coach Steve Caldwell on signing day two years ago. He said his wife joined him on a trip to see Gregory in a high school game. Caldwell said, “Even my wife could pick him out.”

There is hope for several other returnees, most in and out of the lineup last year because of injuries, covid-19 issues are other circumstances. Dorian Gerald, Julius Coates, Zach Williams and Mataio Soli all have assets, most notably speed. All under performed so far.

A defensive end with pass-rushing ability is still high on the wish list for Pittman as the Hogs try to fill their last two or three spots in the 2021 recruiting class. Perhaps a transfer can be found, but finding a freak floating loose isn’t likely.

It’s a huge piece to the puzzle for Pittman going forward. A quick look at the Arkansas sack records reveals their importance. Victories follow sacks. Consider the three top sack totals in the yearly charts (with won-lost record):

Defensive coordinator Barry Odom knows it’s a pressing need. Asked last winter about some of the goals for a spring practice that never happened, Odom didn’t hold back.

“We have to find a guy who can rush the quarterback,” he said. “There is such a premium there. There are ways to do it whether it’s with a pressure or just winning a one-on-one battle.

“If it’s third-and-7, if they are a little bit scared, there is a lot of value there. You can’t let the quarterback have time to read his third option.”

When the Hogs couldn’t pressure the quarterback at Missouri despite playing a lot of man-to-man coverage in the passing game, Pittman said, “There is such a thing as winning a one-on-one battle.”

To do that, the Hogs will have to get bigger, faster and stronger. That mission starts next week when the Hogs return to the weight room.

I loved the line from Pittman when asked about taking only 67 to Mississippi State, three short of the SEC travel limit. He said, “All we have is all we need.”

The Hogs have almost all back. Pittman just needs to keep adding a few more freaks.