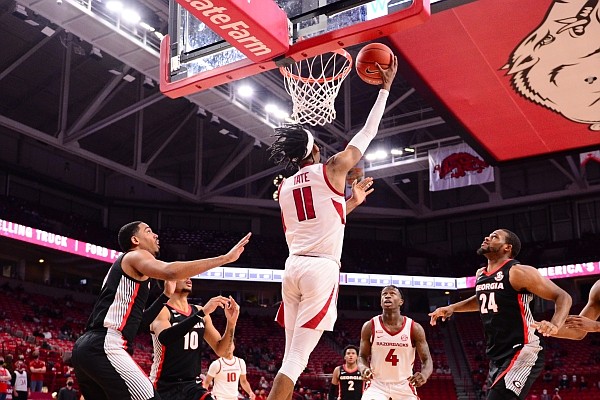 Arkansas guard Jalen Tate makes a layup during a game against Georgia on Jan. 9, 2021, at Bud Walton Arena in Fayetteville.

FAYETTEVILLE — Jalen Tate was disappointed that he committed six turnovers Wednesday in Arkansas’ loss at Tennessee. Not only were the six miscues a season high, they matched a career high.

Against Georgia on Saturday in what felt like a must-win game with road trips to LSU and Alabama looming, Tate turned in a near-flawless floor game in the Razorbacks’ 99-69 home victory.

Tate, a graduate transfer from Northern Kentucky, finished with a 15-point, 10-assist double-double, and he was credited with a single turnover in his 34 minutes in the lineup. He knocked down 5 of 10 shots in the game, including 3 of his last 4 looks inside the 3-point line.

“I thought he was great,” Razorbacks coach Eric Musselman said. “I mean, like even (against) Tennessee, they swarm you and they send long defenders at you and they make it difficult on the guy who’s trying to initiate on offense. Today he was great.

“The 15 and 10, those numbers are hard to get in a 40-minute college game. You know, he spearheaded our offensive attack. I thought he was great.”

Tate contributed six points and four assists in his 18 first-half minutes, but he really turned it on after halftime. He was second on the team in scoring in the second half with nine points, and he added six more assists.

Arkansas outscored Georgia by 23 points with him in the lineup after the break. Tate added four rebounds and two steals.

Tate’s 10 assists — his second most in a game this season (11 vs. Central Arkansas) — were spread amongst five teammates, and he helped set the table for a big day for two of the Razorbacks’ freshmen.

Moses Moody bounced back from a season-low six-point outing at Tennessee on Wednesday with a career-high 25 points, and making the second start of his career, Davonte Davis added a career-high 20 points. They were on the receiving end of 7 Tate assists — Moody 4, Davis 3.

Tate also found Vance Jackson for a 3-pointer midway through the first half, Jaylin Williams for an interior score early in the second half and JD Notae for another 3-pointer prior to the final media timeout of the game. In all, his 10 assists generated 22 points.

"Jalen Tate, he's a great player on and off the court,” Davis said. “He sets the tone for the younger guys, and also the older guys. Everybody looks to him and he's the voice of the team. I'm not surprised he had a double-double."

At the 12:01 mark, he made his best move of the day. With 6-6 Christian Brown defending, Tate dribbled left to the right elbow, spun right, got to the rim, lifted Brown off his feet with a shot fake and got a layup to go high off the glass, plus the foul.

Tate celebrated by looking into the TV camera stationed near the stanchion. Then came a shoulder shrug and a flex.

“He didn’t force any shots, he got to the rim, he did a great job, Jalen Tate did,” Musselman said. “Basket cutting, drawing free throws, taking care of the ball, yeah, I thought he was really, really good for us.”

Through four SEC games, he is averaging 12.5 points on 65.4% shooting inside the arc and 5.3 assists per game. He has recorded 16 assists in Arkansas’ last two games after totaling five against Auburn and Missouri.

And according to KenPom analytics, Tate has assisted on 30.7% of the Razorbacks’ scores when in the lineup in league play, which ranks fifth in the SEC. He tallied one on 38% of the possessions he was on the floor for Saturday, per StatBroadcast.

Musselman commended Tate’s defensive effort. The lanky guard was assigned to cover Georgia guard Justin Kier, who entered the game off a 25-point effort at LSU — a game during which he knocked down 6 of 11 3-point attempts.

Tate finished with five defensive stops Saturday, according to StatBroadcast.

“We had two guys we were focused on not letting beat us from the field and that was (Sahvir) Wheeler and Justin Kier,” Musselman said. “He holds Kier to 1 of 5, who is one of the best offensive off-guards thus far in the SEC. So his defense was awesome.”