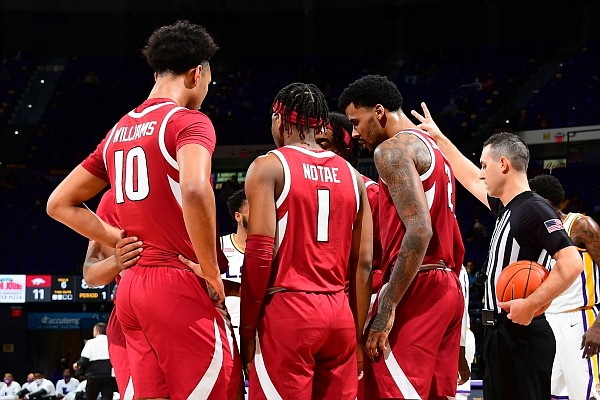 Arkansas players huddle during a game at LSU on Jan. 13, 2021, at the Pete Maravich Assembly Center in Baton Rouge, La. (Photo by Beau Brune via SEC, Pool)

Arkansas’ play at LSU on Wednesday can be summed up by a four-second sequence in the second half of its 92-76 loss to the Tigers.

Razorbacks guard Jalen Tate, who finished with six points and a team-high four turnovers, knocked down a contested midrange jumper, a high-arching shot over the outstretched arm of Trendon Watford. LSU inbounded the ball then proceeded to add its easiest score of the night.

When Tigers guard Eric Gaines left his feet for an uncontested one-handed slam, 27 seconds remained on the shot clock. Quicker than Arkansas’ defense allowed the score, Razorbacks coach Eric Musselman called a timeout — his fourth of the game. He gestured for three in the game’s first 14 minutes.

Musselman said following the game that he can remember only one other game in his college coaching career in which his team played with a complete lack of intensity. He was referencing Nevada’s 85-58 loss to New Mexico in January 2019.

Arkansas senior graduate transfer Vance Jackson finished with 18 points, 10 rebounds and 7 assists in that game for the Lobos.

But Musselman hit the nail on the head in terms of his team’s effort. It was uninspired on both ends of the floor.

Offensively, Arkansas appeared much easier to defend than usual, and possessions were filled with side-to-side dribbling and passes that failed to make a somewhat-suspect LSU defense react.

Intentional, purposeful attacks of the rim were few and far between. Guards were seldom prepared to shoot on the perimeter. Additionally, passes to shooters didn’t always hit their mark.

And the Razorbacks did not respond well to the Tigers’ 2-2-1 pressure or 1-3-1 zone in the halfcourt, Musselman said. The change-of-pace defenses threw Ole Miss for a loop last weekend as well.

“We did not attack it as we were supposed to,” Musselman said. “We didn't get the ball into the teeth of the defense at the nail and then make spray-out plays. We settled for 3-point shots. That about sums it up.

“I thought our shot selection was not good, which is indicative of our shooting percentage. We had eight assists. We didn't have very good point guard play at all. I thought that LSU was more physical and tougher.”

The Razorbacks scored at a .927 point-per-possession rate in the loss. JD Notae and Moses Moody were essentially the only signs of life offensively, but their 40 combined points came on 38 total shots. Notae led with 22 points and Moody had 18.

Desi Sills, who entered the game in the midst of a slump, added 14 points on 4 of 8 shooting. Arkansas was minus-25 in his 29 minutes in the lineup.

The Razorbacks got next to nothing from Davonte Davis and Jackson. The duo, coming off big games in the win over Georgia last weekend, finished with six points on 2 of 19 from the floor.

Defensively, Arkansas did not have an answer for LSU’s frontline, particularly Watford and Darius Days, who each recorded monster double-doubles. Watford added a game-high 23 points and 10 rebounds while Days finished with 18 points and 13 boards — 5 offensive.

Collectively, they were 17 of 26 from the floor and totaled half of LSU’s 14 offensive rebounds. Days did the bulk of his work after halftime, adding 12 points and nine rebounds.

The Tigers were met with little resistance at the rim, getting 13 of 17 layups to go, plus three dunks. They were ultra-sharp in the first half, using a 26-2 run to grab firm control of the game.

From a defensive efficiency rating standpoint, Arkansas turned in its second-worst performance of the season (111.6), ahead of only its Dec. 30 win at Auburn, according to KenPom. LSU, at nearly every position, found success beating defenders off the bounce.

Freshman forward Jaylin Williams said a performance like Wednesday’s cannot happen again. He scored seven points and grabbed a career-high 10 rebounds, and he was one of two players — along with Moody — who Musselman said put forth a solid effort for the Razorbacks.

"Just got to buy in more,” Williams said of the team’s struggles. “We've got to get better as a team — fight harder, play harder, be better on the defensive end and offensive end, share the ball, limit turnovers. We've got to do a lot.

“I feel like we just didn't bring it like we should have. We just have to come harder next game.”

Arkansas is scheduled to face Alabama on Saturday. The Crimson Tide (10-3, 5-0) are in sole possession of first place in the SEC after Tuesday's rout of Kentucky in Rupp Arena.

Alabama will be without a pair of starters in Jordan Bruner (knee) and Herb Jones (finger), and the Razorbacks could use a bounce-back effort. But where will their focus be?

Arkansas has been consistently inconsistent to this point in the conference schedule.