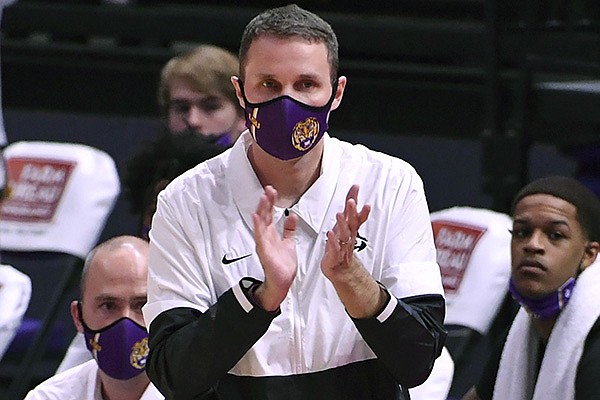 LSU head coach Will Wade looks on during the first half of an NCAA college basketball game against Arkansas Wednesday, Jan. 13, 2021, in Baton Rouge, La. (Hilary Scheinuk/The Advocate via AP)

LSU and Arkansas entered Wednesday as the SEC’s two highest-scoring teams, but only the Tigers' offense showed up early for their game at Pete Maravich Assembly Center in Baton Rouge, La.

“I thought our guys did a great job,” LSU coach Will Wade said. “We were prepared, we were ready to go, we were really focused. We had two good days of practice and felt like we got off to a good start.

“Our 2-2-1 (defense) is starting to really take shape and form and throw people off. It does not allow you to run a lot of your plays. You have just got to be able to make plays.”

“Darius was absolutely awesome tonight,” Wade said. “With Darius and Trendon, we were able to exploit some mismatches with their big guys. We tried to put some different things in to get the ball to Days and Trenton in different areas. Basically those guys did a good job and Trenton did a good job finishing.”

Cameron Thomas, a freshman who is the league’s leading scorer at 22.3 points per game, finished with 17 points after entering as a game-time decision due to an injury. Ja'Vonte Smart had 14 points and Miwani Wilkerson 11 for for LSU (9-2, 4-1 SEC).

“We kind of got the one-one-one match-ups we wanted,” Wade said. “They are not a team that you can drive it at when they are in their sets because they are very good at that and stopping the gaps. But if you move the ball you can and that’s what we did.”

Wade said getting Arkansas' 7-3 sophomore Connor Vanover out of the game was a benefit for his team.

“Mwani and (Aundre) (Hyatt) both hit 3-pointers early in the game because they were guarding them with Vanover,” Wade said. “When they hit those threes, they were not able to play Vanover the rest of the game, which really, really helped us.”

LSU led 51-31 at halftime, but Wade was upset Arkansas outscored his team 45-41 after intermission.

"I think the first half we played really well except for the last two or three minutes, where we have some things to work on,” Wade said. “The second half we gave up 12 offensive rebounds and had 12 turnovers, which is why we weren’t as crisp. I thought we lost our focus, lost our energy. We were the more energetic and excited team in that first half.

“The second half we lost that a little bit. So we are still searching for that 40 minutes of consistent basketball, but overall we have a lot to be proud of. To score over 90 points on a good defensive team and to beat a good team by 16, we would have signed up for that at 2 o’clock this afternoon for sure.”