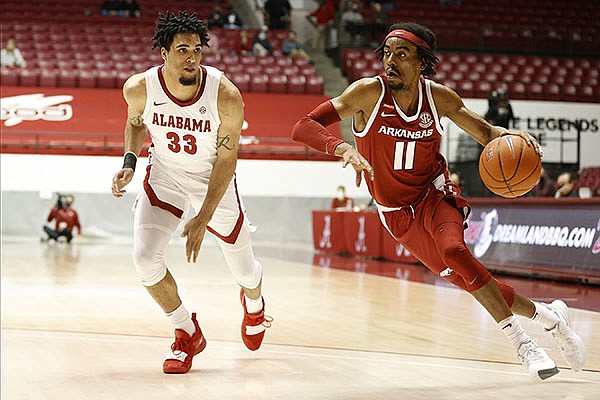 Arkansas’ offense went from bad at LSU on Wednesday to worse Saturday at Alabama.

The Crimson Tide handed the Razorbacks their second beatdown of the week with a 90-59 rout in Coleman Coliseum, dropping Arkansas to 10-4 overall and 2-4 in SEC play. A second consecutive performance in which Eric Musselman’s group lacked focus and intensity and direction on both ends of the floor has many concerned about the road ahead in the conference.

Questions are aplenty. Do the Razorbacks have enough offensive firepower to compete in the league? And can they manufacture enough tough, together defensive trips to remain in games when shots aren’t falling?

It was also Arkansas’ eighth-worst offensive efficiency mark in an SEC game since the 2002 season, according to KenPom data.

True freshman shooting guard Moses Moody was Arkansas’ lone source of offense for a majority of the game. He finished with a career-best 28 points on 10 of 25 from the floor. Graduate-transfer guard Jalen Tate was second on the team with 10 points.

No other Razorback scored more than five points. Outside of Moody, the remainder of Arkansas’ roster shot 11 of 38 overall and 1 of 10 from 3-point range.

In his postgame comments, Musselman pointed out that the Razorbacks scored most of their points running halfcourt sets rather than playing out of the flow of the game. His first team at Arkansas, thanks in large part to Mason Jones and Jimmy Whitt, was at times lights out generating offense and clean looks without a play call from the bench.

When asked what needs to be done to regain footing offensively moving forward, he again added that the Razorbacks' point guard play must improve. Tate, who to his credit does have a pair of 10-plus assist games this season, turned in his second six-turnover game against the Crimson Tide.

He committed four turnovers in the first half, including three in a 83-second stretch. Musselman said he would not credit two of the miscues to Tate, but even then he totaled at least four for the second consecutive game and third time in four outings.

“There’s some guys on our stat sheet who have zero turnovers and guys drop passes and stuff,” Musselman added. “But it’s really when he’s not on the floor that not having the point guard has really been the biggest issue. They’re both issues, but that’s really been an issue.”

Arkansas also continues to get next to nothing from junior guard Desi Sills, who many considered the heart and soul of the team just a few weeks ago. He scored three points on 1 of 8 shooting at Alabama.

In the Razorbacks’ last five games, Sills has averaged 6.2 points and made only 3 of 15 attempts from 3-point range. Per KenPom, Sills holds an offensive rating of 95.7 in conference play. For the season, that figure is 113.4.

“We went through it last year where (he had) really hot streaks and then some slumps,” Musselman said. “He’s definitely struggling right now. Our missed layups at the rim are very concerning as well.”

Justin Smith, 15 days removed from surgery on his right ankle, added five points in his return, as did JD Notae and Davonte Davis. And since emerging at Tennessee and against Georgia, Vance Jackson is 1 of his last 12 from the floor for three points.

Offensively, the Razorbacks operated aimlessly much of the game. Through six SEC games, Arkansas ranks 10th in offensive efficiency and 3-point field goal percentage, and 12th in converting 2-point attempts.

Issues on the other end are just as concerning for Musselman and his staff. Arkansas is ninth in the league in defensive efficiency, 11th in defending shots inside the arc, and opponents are getting to the foul line far too regularly.

Teams have hit 37.1% from 3-point range as well. Perimeter defense was a worry of Musselman’s in the preseason, and it is now a worrisome reality. He said many players are reluctant to defend the 3-point line because they are also worried about getting beat off the dribble due to a lack of lateral quickness.

From a defensive efficiency standpoint, the Razorbacks posted a mark of 114.9 on Saturday, according to KenPom, the third worst in Musselman’s tenure. Moody said the team’s buy-in on the defensive end has to be better.

Alabama’s 15 made 3-pointers are tied for the most allowed by a Musselman-coached college team. Auburn, which travels to Arkansas on Wednesday, also hit 15 triples in the teams’ conference opener on Dec. 30.

“I’ve said it in the past, I feel like at your lowest point you're open to your greatest change,” Moody said. “We're just coming together and trying to make it through these couple tough games. But they say if you make it through the night there is a brighter day. We're meeting a lot of adversity right now, so we've got to get through that.