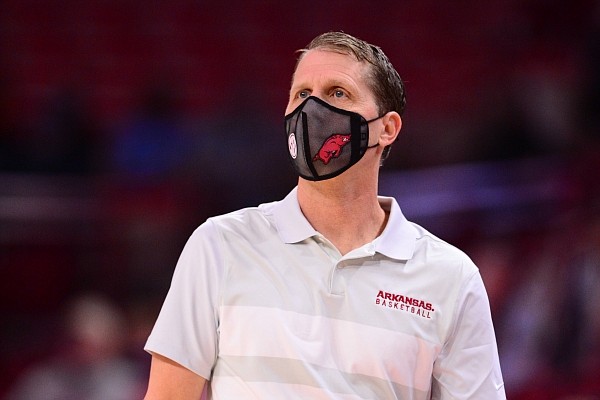 Arkansas coach Eric Musselman looks toward play on the court during a game against Georgia on Jan. 9, 2021, at Bud Walton Arena in Fayetteville.

Yet already Van Horn had sat for a game slumping shortstop Casey Martin to regroup.

So even the best of answers inevitably slide to questions at some point during a long season.

They certainly deserved it. Against Georgia, reserve guard Davis scored a career-high 20 points in his second start.

Tate scored 6 points with 1 assist vs. 4 turnovers in Baton Rouge. Davis and Jackson combined shooting 2 of 19 from the field.

“I mean, really it’s hard to win when you got a guy go 1 of 8 and a guy go 1 of 11,” Musselman said. “We didn’t have good point guard play at all. And quite frankly our defense was just as bad.”

Seems unbelievable now post Arkansas’ Wednesday Waterloo but it was only two Wednesdays ago that LSU Coach Will Wade fretted his Tigers’ defense against Georgia. LSU in Baton Rouge escaped Georgia, 94-92 in overtime.

Remember in September when Alabama’s Crimson Tide football defense so struggled to outlast Ole Miss, 63-48 that some wrote and broadcast that Nick Saban got “outcoached?”

Sure it’s cliche to say college basketball conference races are marathons not sprints.

But covering enough stumbling league starts from some of Eddie Sutton’s and Nolan Richardson’s greater Arkansas teams, and recalling some hot early teams left out in the NCAA Tournament cold, reminds that most cliches last because they’re true.