Smith’s injury a first in his career 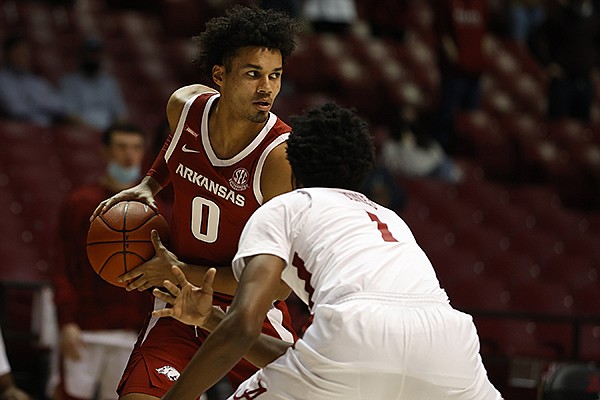 FAYETTEVILLE — Until the University of Arkansas basketball team’s SEC opener at Auburn on Dec. 30, Razorbacks senior forward Justin Smith had never dealt with a serious injury.

Smith, a 6-7 graduate transfer from Indiana, played in 98 games for the Hoosiers the previous three seasons with 73 starts.

“I think I missed one practice my whole college career at Indiana,” Smith said Monday night on Arkansas Coach Eric Musselman’s radio show. “I never missed a game. And I never missed practice here until my injury.”

Smith injured his right ankle with seven minutes left in the first half at Auburn when he was fouled by Chris Moore — a freshman from West Memphis — to prevent a breakaway score after a turnover.

Smith went to the bench, then came into the game with 2:32 left in the half and played until halftime. He didn’t play in the second half, but the Razorbacks pulled away to win 97-85.

After being projected to be out 3-6 weeks, Smith beat that timetable. After missing four games, he returned to the starting lineup Saturday at Alabama.

“He was going to have what I call a warm-up game no matter what,” Musselman said on his radio show. “I mean, anybody that’s had surgery and been out, it’s going to be a game where they’re just trying to find some rhythm.”

“I think he’ll get a little more rhythm Wednesday,” Musselman said. “And then I’m hopeful by Saturday he’ll be back to where he was.”

“Justin was winded the other day,” Musselman said. “It was pretty visible after about three minutes that he was struggling to breathe and asked for a couple blows to come out.

“But the thing is, he couldn’t do a whole lot when he was out. It’s a foot. It’s an injury where there’s pain. He couldn’t get on a treadmill, he couldn’t really get on a bike, because we just wanted that pain to subside and the swelling to continue to go down.”

Smith played the first 4:38 of the Alabama game before going to the bench. He substituted in and out three more times in the half and played a combined 11 minutes, then played seven minutes in the second half.

“It’s tough watching your team play,” Smith said. “It was good to get a game under my belt and get back to it.”

“He does all the little things,” Musselman said. “He’s a great ball mover for us. He’s our best defender, our best offensive rebounder. So we certainly need him to lead as much as he possibly can both on the court through his actions, but also verbally.”

Smith said a tough part of going through rehabilitation for the first time was experiencing pain while trying to make moves that previously he’d always done naturally.

“You’re so used to doing things without thinking about it,” Smith said. “Then you have an injury, you either do that reaction, but there’s pain, or you aren’t able to do it for the most part.

“The hardest thing is getting back to where you were before. Whether that be strength or mobility. Just trying to find your way back to normal.

“I’m still figuring that out. But I feel good and we’ve got a good training staff, and they’ve done a good job working with me. We’re working every day still.”

Freshman guard Moses Moody, who led the Razorbacks with 28 points at Alabama, said having Smith back in the lineup is a plus.

“That definitely gives us a lift,” Moody said. “Just knowing that he’s back there to protect the rim and protect the paint, to do what he does. That’s a positive to have him back in the rotation again and back at practice.”

Smith said conditioning was a challenge after being out for two weeks.

“You can try and simulate game situations in practice and cardio and different conditioning drills, but there’s nothing like going out there and playing in an actual game,” he said. “Which is why I was glad to finally get my first wind against Alabama and kind of get a little bit more experience out there.”