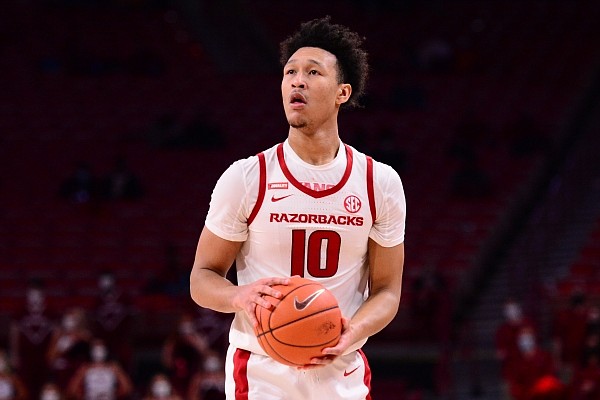 FAYETTEVILLE — Jaylin Williams on Wednesday notched the first of what may become many signature moments in his time at Arkansas.

With 13:26 left and the Razorbacks rallying from a 19-point first-half deficit, junior guard Desi Sills drove into the lane and tossed up a contested layup that missed everything. But Williams came to the rescue, throwing down a one-hand putback dunk that sent Bud Walton Arena into a frenzy.

Arguably the most impactful bucket of his young career gave Arkansas its first lead and was part of an impressive performance off the bench in the Razorbacks’ 75-73 comeback victory.

“That one-hand dunk was literally one of the most hype moments I've ever seen in person, especially coming from a freshman,” Arkansas guard Jalen Tate said. “The timing of it was perfect. It did great things for our momentum during the game at that point.

“It definitely was a huge pickup for all of us."

Williams played 28 minutes in the Razorbacks’ first victory since Jan. 9. Arkansas coach Eric Musselman did not take him off the floor in the second half.

Despite the Razorbacks trailing 43-31 at halftime, they were plus-2 in the freshman forward’s eight minutes. Arkansas outscored Auburn by 14 in the second half, and Williams played no small role in the team’s most thrilling game of the season.

Williams finished with 7 points, 7 rebounds — 2 offensive — and 2 blocks. He also handed out two assists, both to Davonte Davis for scores in the lane.

“Look, for a freshman big to play an entire 20 minutes, that’s not easy,” Musselman said. “I’m going to shorten our rotation unless we stink, and I’m just going to continue to try to draw straws and put people in. I made a decision at halftime that I was not going to extend the bench whatsoever.

“And that’s why Jaylin played so many minutes and it was a shorter rotation.”

Williams’ 28 minutes vs. Auburn matched a career high, and he made the most of each one.

“When you’ve got a guy like Jaylin Williams bringing it and he works each and every day, he's going to build confidence each and every game,” said Sills, who scored a team-high 22 points. “Even in practice he's one of the most talkative guys, and I feel like he did what he was supposed to do tonight.

“Coach started him (in the second half) because he was doing everything in the first half to help us win.”

Roughly four minutes before his highlight-reel tip slam, Williams helped key an 18-4 Arkansas run with a 3-pointer from the right wing. He is a more-than-capable threat beyond the arc, but he has perhaps been hesitant to release a perimeter jumper in recent games.

His 3-ball, which pulled the Razorbacks to within 45-38 with 17:15 to go, was his first attempt from distance in four games. Musselman believes seeing the shot go down will boost the freshman’s confidence.

“I actually said to him the other day, ‘Hey, if you’re open, we want you to shoot it. We don’t want you to just be a ball swinger,’” Musselman said. “Hopefully with his feet set — we see it every day in practice that he’s a really good shooter, and I think he’s improved from a consistency standpoint from three as well.”

Tate agreed with Musselman’s assessment, adding that Williams only wants to do what is in the best interest of the team each time out. Tate believes Williams knocking down that 3-pointer will make future opponents defend him differently.

“He comes in every day and works just like Desi does. His confidence, I don't think is lacking ever, really,” Tate said. “(It is) going to do even more for his confidence because he's going to continue to make plays.”