Razorbacks will travel to Texas a little earlier than usual 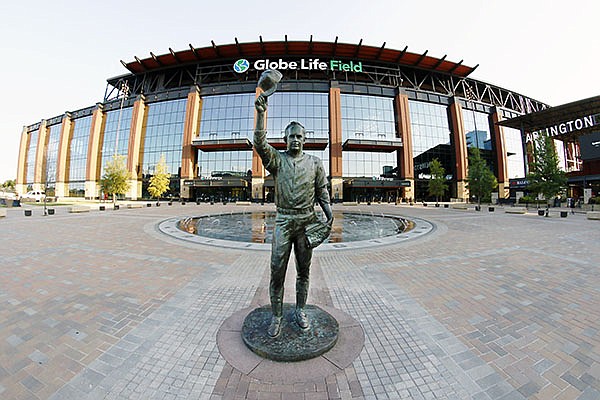 A general view of north side of Globe Life Field with a statue of former Texas Ranger Nolan Ryan prior a baseball game between the Texas Rangers and the Seattle Mariners in Arlington, Texas, Tuesday, Aug. 11, 2020. (AP Photo/Ray Carlin)

FAYETTEVILLE — The Texas Rangers organization is trying its hand at a marquee early-season baseball event in a state that is already full of them.

The Rangers officially announced the College Baseball Showdown on Thursday — a six-team event that will include Arkansas, Ole Miss and Mississippi State from the SEC, and Texas, Texas Tech and TCU from the Big 12.

Inaugural games are scheduled to be played Feb. 19-21 at Globe Life Field, the $1.2 billion second-year home of the Rangers in Arlington.

Arkansas is scheduled to open with Texas Tech on Feb. 19 and follow with games against Texas and TCU the following two days. All three of the Razorbacks’ games are scheduled to start at 7 p.m. and will be streamed by FloSports.com, which requires a subscription.

A schedule announcement earlier this week listed Texas as Arkansas’ season-opening opponent, but a change this week swapped the Red Raiders and Longhorns on the Razorbacks’ schedule.

Arkansas is no stranger to playing the three teams it will face from the Big 12. The Razorbacks have played Texas, Texas Tech and TCU at least once since 2019, and have faced all three teams in the NCAA postseason since 2018.

“Dave’s running a juggernaut over there, but it’s been awesome competing against them the past few years,” Texas coach David Pierce said of playing Arkansas. “They’ll test you and you’ll find out about your team and where your weaknesses are, and totally get exposed.”

After hosting Texas and Texas Tech for midweek games in 2018, Arkansas beat both teams at the College World Series that year. The Razorbacks played all three teams in 2019 — Texas for a midweek series in Austin, TCU twice at the NCAA Fayetteville Regional and Texas Tech at the College World Series. The Razorbacks lost to Texas at the Shriners College Classic in Houston last year.

“We know them pretty well and they know us,” Van Horn said. “The games are always really well played, for the most part. The competition is incredible. It’s a real SEC weekend feel for us and it should be very entertaining.”

The College Baseball Showdown is formatted like the Shriners College Classic that is held annually at the Houston Astros’ home stadium. Arkansas has played in that event every fourth year since 2012.

In Houston and Arlington, a total of nine games are played over three days, totaling three games for each participating team. Teams from the same conference will not play one another.

Tickets for the College Baseball Showdown in Arlington went on sale Thursday and are being offered at $25 for a day pass or $50 for a weekend pass. The Rangers will cap attendance at between 14,000 and 15,000 per day to be in compliance with covid-19 guidelines.

The Razorbacks have been affiliated with several Texas-based college baseball events in recent years. Arkansas participated in the inaugural Frisco College Classic in 2017 and is scheduled to play in the Round Rock College Classic next year at Dell Diamond, the Astros’ Triple-A home near Austin.

All of the events attempt to pull teams from Power 5 conferences, particularly the SEC and Big 12. Six SEC teams and five Big 12 teams are scheduled to play in the four events this year.

Van Horn said it is important to play in Texas — and in particular in MLB stadiums — because it helps the Razorbacks recruit the state. There are 12 Texans on Arkansas’ roster this season.

“It does keep these kids motivated,” Van Horn said. “They get to see a lot of friends and parents…and I’m sure there will be a lot of athletes that are in high school right now that would love to play for one of these six universities down the road.”

Unlike most other early-season events that are typically played on the second or third weekend of the season, the College Baseball Showdown at the Rangers’ ballpark will be played on opening weekend for all teams. The Razorbacks will open on the road for the first time since 2007.

“Usually you try to play three games at home and get a midweek game before you head out to an event like this,” Van Horn said, “…but when I got the call from (TCU coach Jim Schlossnagle) about this, it was a no-brainer.

“I’d be disappointed if my head coach turned this down because it was opening weekend. I don’t know if we’ll quite be ready or where we want to be, but the experience will tell us what we need to work on.”