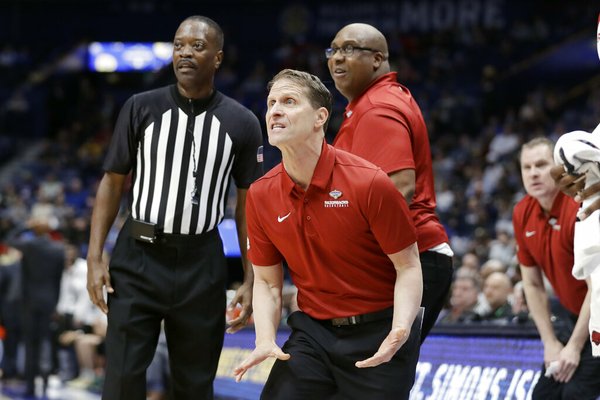 FAYETTEVILLE — The last time the University of Arkansas played Vanderbilt in Nashville, Tenn., it unexpectedly was the final SEC game of the 2019-20 basketball season.

After the Razorbacks beat the Commodores 86-73 at Bridgestone Arena on March 11, 2020, to cap the first-round games in the SEC Tournament, the event was canceled shortly before tipoff of the next day’s noon opener between Alabama and Tennessee.

Other college conference tournaments also were canceled, then by the end of the day on March 12 the NCAA Tournament had been canceled because of the coronavirus pandemic.

Arkansas vs. Vanderbilt: How to watch and listen, notables, team comparison

“It seems like 10 years ago,” Arkansas Coach Eric Musselman said. “Everything seems like it’s been a long time ago.

“When’s the last time you got on a plane or went to a restaurant and you didn’t have a mask on? Now it’s going into an arena and coaching with a mask on.

“The last night we were in Nashville was obviously surreal because we had won a game and then just found out the next morning we were done playing.”

Arkansas is back in Nashville today to play the Commodores, this time a couple of miles away from Bridgestone Arena at Memorial Gymnasium on the Vanderbilt campus.

With the pandemic continuing to rage and take lives around the world, safety protocols will limit today’s crowd to 54 — family members of the Commodores — in the gym with a capacity of 14,326.

But at least there will be a game being played.

Today’s matchup had been in doubt after Vanderbilt postponed its game against Texas A&M scheduled for Wednesday night because of a combination of positive tests for covid-19, contact tracing and subsequent quarantining.

The Commodores and Razorbacks both took tests for the virus on Thursday, and there were enough negatives to play today.

Arkansas (11-4, 3-4 SEC) will look to win back-to-back conference games for the first time this season after rallying to beat Auburn 75-73 on Wednesday night in Walton Arena when the Razorbacks overcame a 36-17 deficit.

It was the third consecutive game in which the Razorbacks trailed by at least 19 points in the first half. The previous two games they lost at LSU 92-76 after trailing by 31 points and lost at Alabama 90-59 after trailing by 25.

“We’ve got to get off to better starts,” Musselman said. “So there’ll be a change in the starting lineup again.”

After guard JD Notae made his first start of the season and Connor Vanover was back in the lineup against Auburn — for the sixth different combination in seven SEC games — Musselman figures to go with the group that played most of the second half when the Razorbacks outscored the Tigers 44-30.

Sills, who led the Razorbacks with 22 points, and Williams, played all 20 minutes of the half. Moody played 19. Tate — who fouled out with 2:08 left with 14 points, 5 assists and 4 rebounds — played 15 minutes. Smith, in his second game back after ankle surgery, also played 15 minutes in the second half. He finished with 10 points.

“I don’t know if a team could’ve played any harder in the last 20 minutes,” Musselman said. “We had guys absolutely gassed in timeouts.”

Freshman guard Davonte Davis played 11 minutes in the second half for what amounted to a six-man rotation. Notae played 29 seconds in the half after Tate fouled out and Davis turned the ball over twice against Auburn’s press.

“I made a decision at halftime that I was not going to extend the bench whatsoever,” Musselman said. “That’s why Jaylin played so many minutes and it was a shorter rotation.”

“Jaylin’s been phenomenal,” Musselman said. “He played an entire 20 minutes, which doesn’t happen in a second half of a really, really close game for a freshman big — for any big. I did not want to take him off the floor.”

Musselman said he’s looking to have a rotation of seven today.

“Sometimes there’s not a lot of separation in our play,” he said. “But I do think I’m going to let some of these guys play through mistakes a little bit more because they’ve earned it.”

Vanderbilt (4-6, 0-4) is the only SEC team that’s winless in conference play, but the Commodores lost by only three points to Kentucky and Mississippi State.

Vanderbilt sophomore point guard Scotty Pippen Jr. is averaging 21.2 points and 5.3 assists to rank second in the SEC in both categories. He’s hit 20 of 57 three-pointers and 58 of 70 free throws.

“He’s a high-volume free throw attempt player, so you’ve got to be disciplined and try to keep him off the foul line,” Musselman said. “He can make three-point shots, he can also take you off the bounce. He attacks the rim really good.

If Musselman goes with the same five players today he did in the second half against Auburn, it will be the lineup that started at Alabama.

That 31-point loss was the most-lopsided of Musselman’s six seasons as a college coach at Nevada and Arkansas, but the next game the Crimson Tide won 105-75 at LSU after leading by as many as 43 points.

“I was watching and was like, ‘Dang, we played [Alabama] probably better than what I saw at the start of the LSU game,’ ” Musselman said of the Tigers’ struggles against the Tide. “I didn’t know anybody could play even worse.

“I actually felt good about some of the things we did.”