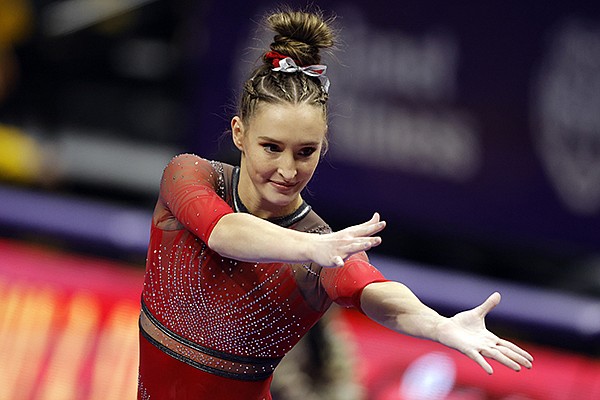 The No. 6 University of Arkansas Gymnastics team kept up its strong start on Friday, making history with its first dual meet victory on the road over Georgia at Stegeman Coliseum.

Arkansas junior Kennedy Hambrick clinched the meet with a 9.925 in the anchor spot on the beam to wipe out a 9.075 in the leadoff spot while Georgia had to count a fall on the floor exercise when two of its last three gymnasts had falls.

“Just really, really proud of the team,” Coach Jordyn Wieber said. “Obviously our first win of the season feels really good, and to do it for the first time in program history at Georgia, we kept saying our theme was ‘uncharted’ and this is just that uncharted territory we’ve been striving to get toward.”

Wieber was particularly pleased with hitting five consecutive routines on the beam after Kiara Gianfagna’s fall in the leadoff spot.

“Having our season high on vault and our second-highest score on floor, then wrapping it up on beam, especially after a fall with the first athlete up, that just shows their fight and their grit,” Wieber said.

Hambrick was on the podium in three of four events and captured her sixth career all-around with a score of 39.5, just ahead of teammate Sarah Shaffer, who was second at 39.35.

Sophomore Bailey Lovett had a second huge meet in a row, tying Hambrick at 9.925 to win the balance beam. Lovett’s 9.9 on the floor was good for second behind Shaffer (9.925), who came in second along with Hambrick on the vault with matching 9.875s behind Georgia’s Megan Robert’s event-winning 9.9.

Arkansas posted its highest road score of the season as a follow-up to last week’s 197.25 at home, the third-highest score in program history and the second-highest score in NCAA gymnastics last week, behind only its opponent, No. 1 Florida.

The Razorbacks had been 0-9 at Stegeman Coliseum and 1-14 in meets held in Georgia against the GymDogs (1-3).

The Razorbacks increased their lead with another big showing on the floor with nothing lower than a 9.85. In addition to Shaffer’s 9.925 and Lovett’s 9.9 on the rotation, the duo of Sophia Carter Abby Johnston both notched 9.875, while Hambrick an Madison Hickey were posting 9.85s.

Georgia gave only a little ground by notching a 49.3 on the beam, but their floor exercise team let them down, with Amanda Cashman (9.275) and Rachel Baumann (9.3) both having falls, Baumann’s coming at the end of an explosive tumbling run that sent her out of bounds.

The Razorbacks have an upcoming bye week before resuming on Feb. 12 at Kentucky.