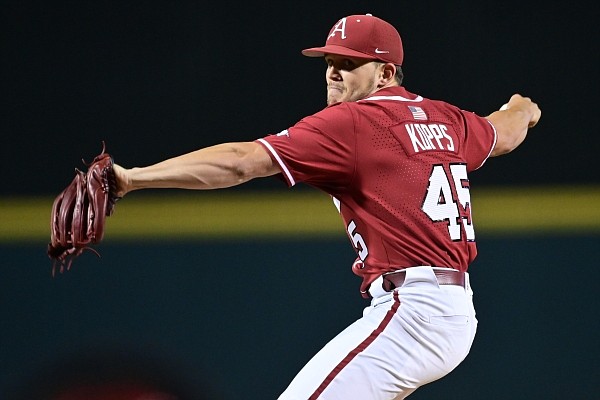 FAYETTEVILLE — Kevin Kopps made a clean sweep of major postseason honors Thursday by winning the Golden Spikes Award, given annually by USA Baseball to the best amateur player in the country.

The University of Arkansas pitching ace had previously won the Dick Howser Trophy, nicknamed the “Heisman Trophy of college baseball”; the Stopper of the Year Award; and college player of the year awards given by the National Baseball Foundation and Collegiate Baseball.

Kopps, 24, beat out the other two finalists, Vanderbilt starters Jack Leiter and Kumar Rocker, for the Golden Spikes Award. Leiter and Rocker both posted 179 strikeouts to tie for the most in the NCAA. Leiter was taken with the second pick of the MLB Draft by the Texas Rangers, while Rocker — who led the NCAA with 14 wins — was taken with the 10th pick by the New York Mets.

“It’s an honor to be part of that group with them,” Kopps said. “If you would have told me at the beginning of the season I would have been a part of that, I don’t think I would have believed you. Just because, like they were already kind of known and they are huge deals, and they’re really good players, too.”

Kopps told local media as well as the ESPN duo of George Grande and Karl Ravech in the recorded award announcement that the large clutch of awards he pulled down this season still haven’t sunken in yet.

“I think I need a couple more months,” Kopps said. “Like I said earlier [on ESPN], I still just kind of feel like Kevin.

“I think I’m more of an introvert. I think I expect a lot from myself. So I think that’s part of the reason why it hasn’t sunk in, because I just expect this to happen. So I guess it tones down the emotions a little bit. But I think a big part of it is that I like to keep to myself and not really talk that much.”

He was asked what his current self might tell the Kevin Kopps who opened the season as an unproven reliever coming off a tough 2020 season.

“I don’t know. I’d tell myself I guess what Coach [Matt] Hobbs always told me, that I was going to be an All-American and to have confidence in that,” Kopps said. “Just kind of reassure myself more because as the season went on, that’s when I started to build on top of myself and really realize who I was.”

Kopps was drafted Monday by the San Diego Padres with pick No. 99 in the third round of the MLB Draft.

He said he had already worked out a signing bonus agreement with San Diego and that he felt “very, very good” about it.

“I was super excited when they called,” he said. “It was so fast. I mean I think everything happened within 15 seconds and then we got to watch it on TV. Just gave a bunch of hugs to my family. We were all filled with emotion.”

Kopps is the second Arkansas player to win the Golden Spikes after outfielder Andrew Benintendi in 2015.

His statistics from the season could stick in record books for a while. He led the NCAA with a 0.90 ERA, even after giving up three runs in his eight-inning appearance in the season finale, a 3-2 loss to North Carolina State in the NCAA Fayetteville Super Regional.

During a stretch of 12 consecutive appearances of 2-plus innings each from April 10 through May 20, Kopps worked 37 1/3 innings that included a span of 28 consecutive scoreless innings, one shy of the school record.

Kopps said he expects the Padres will deploy him as a relief pitcher rather than a starter, and they have not talked about what level of the organization’s minor-league system he would be assigned.

“I think the plan is to just be aggressive with me and start pitching me immediately,” Kopps said.

Kopps picked up widespread acclaim with a nearly unhittable pitch he was able to master this season, a cutter-slider pitch that he threw with “gyroscope” action, which helped it develop friction in the air and have a sharp drop.

Kopps said he just called his speciality pitch a “cutter,” but that Hobbs put a name to it during the season.

“Coach Hobbs in an interview called it Steve,” Kopps said. “And halfway through the season that’s what everybody would call it. Just Steve.”

The biomedical engineering major was asked what his legacy at Arkansas might be.

“I don’t know,” Kopps replied. “That’s kind of a hard question to answer about yourself I would say. But I mean hopefully people look at my career and it’s like an inspiration to keep putting in the work and to not give up.”