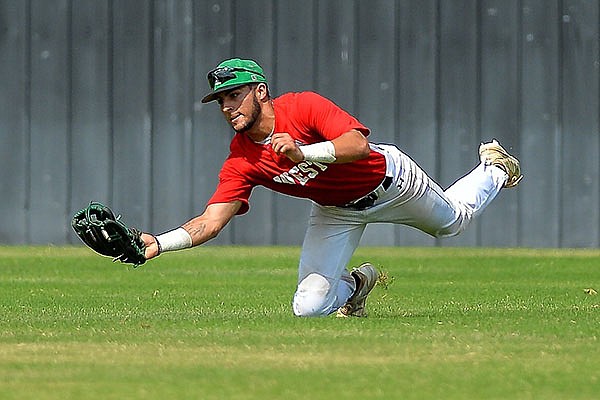 FAYETTEVILLE — It's hard to determine what is bouncing higher this summer: baseballs off of Landrey Wilkerson's bat, or kids at his job.

The Razorbacks commit from Van Buren is currently playing summer baseball in the Ban Johnson League of Kansas City. Official stats aren't available, but he earned player of the week honors last week for his play in a doubleheader in which he went 4 for 7 with 2 triples, 1 double and 7 RBI.

The league only plays doubleheaders on Mondays and Wednesdays, so it freed up Wilkerson to take a summer job. Instead of delivering pizzas or waiting tables, Wilkerson and some teammates deliver inflatables to parties and events.

"We set them up," Wilkerson said. "Then we get a two- or three-hour lunch break, and then we go back and clock back in and go pick them up again."

It may seem like a pretty typical summer job, but Wilkerson does get some extra enjoyment out of it.

"We usually try them out," he said. "We call it taste testing. Whenever we put them up or whenever we take them down, you've got to go down with it."

In his first full season with Crowder (Mo.) College, Wilkerson didn't have ups and downs.

He earned NJCAA first-team All-America honors and helped lead Crowder to the No. 1 seed at the NJCAA Division I World Series, where the Roughriders finished tied for third. After all of that success, Wilkerson was ready to join another good team this summer in the Ban Johnson League.

"It was funny because whenever we were at the World Series, me and the Crowder guys – there are three of us that play on (the team) – we were like, 'Dang, they haven't lost a game,'" Wilkerson said. "Eight games they've already played and we're like, 'Dang, we're going to be good.'"

But it didn't quite turn out that way at first.

"(We) get there and we lose like the first two or three games, and we're like, 'Guys, what the heck is going on?'" he said.

One of those losses was a nonconference game against the St. Joseph Mustangs.

The Mustangs nominated one Raider player in the starting lineup to be the "taco boy." That meant if he struck out during the game, the fans in attendance would get free tacos. The fans made sure that player knew he was supposed to strike out.

After the loss to St. Joseph, the Ban Johnson Raiders quickly righted the ship and now have a record of 18-2 on the season.

While playing just two nights a week is good for Wilkerson's work schedule, he does miss baseball during the week.

"I honestly wish we could play more," he said. "Whenever we step off the field I'm like, 'Dang, it's over.'"

The former Van Buren Pointer was recruited by Arkansas out of high school, but was asked to walk on.

"I didn't see the bigger picture and I was like, 'OK, I'll go to JUCO,'" Wilkerson said. "So I went to Crowder and I developed as a player and as a person. It's something that I would encourage anyone to do.

"So many kids want to go D-I out of high school. I don't see that often anymore, that you just go and start playing."

"(Arkansas) reached out to me, and they told me they saw that I went and got at-bats under my belt and got games under my belt," He said. "I'm glad I went somewhere where I could play my first two years and then move on."

Wilkerson grew up a Razorbacks fan and wanted to emulate Van Buren alumni who played for Arkansas.

"I grew up watching Tyler Spoon and Brandon Moore being Razorbacks," Wilkerson said. "As a little kid, it's like you look up to those kinds of people. You see them around town. You're a little fanboy.

"It's always been a dream of mine. I've been to Baum-Walker Stadium plenty of times when I was growing up, and I was like, 'Man, I want to play here.'"

Wilkerson will get a chance next spring to fulfill his dream of playing for the Razorbacks, but he might just take a few jumps between then and now.