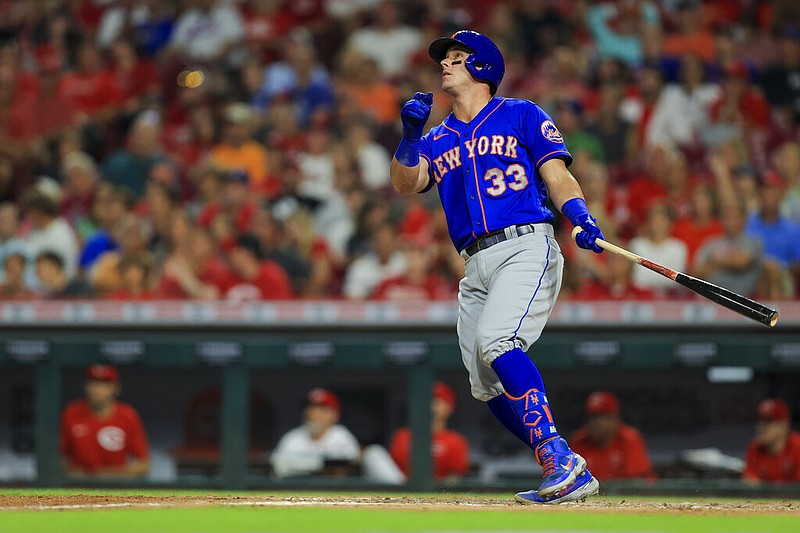 Here is a look at how former Razorbacks are faring since the MLB All-Star break:

James McCann could have been discouraged when his name wasn't called for the second consecutive day, but instead he was ready. After sitting out Sunday's game against the Pittsburgh Pirates, McCann wasn't in the starting lineup for the series opener against the Cincinnati Reds.

Instead, the Mets went with McCann's backup, Tomas Nido. But with the Mets trailing 8-7 in the eighth inning, McCann was called upon to pinch hit against left-handed pitcher Amir Garrett. Down in the count 0-1, McCann delivered a go-ahead home run to left field.

“McCann is really good against lefties also and dangerous in this park," bench coach Dave Jauss told the New York Post. "We have done this before. It turned out results-wise to be a big move, but it’s not a big move.”

After taking the 9-8 lead, it looked like the Mets would storm back and win the first game of this series, but New York gave up a run in the bottom of the ninth inning to tie the game and send it to extra innings, which brought up McCann again.

This time, McCann came through with a single to left that scored the automatic runner on second base. The hit gave the Mets a 10-9 lead.

The Reds would tie the game again in the bottom of the 10th, and it would take a five-run outburst from New York to give the Mets a 15-11 win.

McCann became the first Mets player to have multiple go-ahead hits in the eighth inning or later in the same game since Nick Evans against the Marlins on Sept. 6, 2011, according to the Twitter account New York Mets Stats.

Since the All-Star break, Andrew Benintendi is hitting .211 with 2 doubles, 2 RBI and 3 strikeouts in 19 at-bats.

Benintendi's best games since coming back from injury on July 4 was right before the All-Star break against Cleveland. He went 3 for 5 with a home run, 2 RBI and 2 runs scored.

The Royals are in last place in the AL Central, 18 games back of the Chicago White Sox. It looks likely that Benintendi will miss the playoffs for the third consecutive year after making the postseason in his first three years in the majors.

Because of the All-Star break, Dallas Keuchel took an extended break from pitching. Before his appearance on Tuesday, Keuchel's last start was July 9, an 11-day break from the mound.

In his return, Keuchel pitched 5 innings, gave up 4 hits and 2 earned runs. He struck out 3, but did give up a home run. The veteran from Tulsa, Okla., did lower his ERA to 4.22.

The White Sox lead the AL Central, and one reason is their deep pitching staff. Keuchel, a former Cy Young Award winner, is the fourth or fifth pitcher in the rotation for Chicago.

Ryne Stanek has appeared in three games for the Astros since the break. The right-handed reliever has pitched 2 2/3 innings, giving up 1 earned run on 1 hit and 3 walks.

Four of the eight outs Stanek has recorded have come via the strikeout. In his July 19 appearance against Cleveland, Stanek gave up one run, but he also earned his 12th hold of the year.

In a start against the Tampa Bay Rays, Drew Smyly went 5 2/3 innings in a no decision. Smyly gave up 3 earned runs on 4 hits, walked 2 batters and struck out 6 in his first start since the break.

While Smyly had a good appearance, he also registered his third hit of the year. It was his third hit in 28 at-bats, which equates to a .107 batting average. He has struck out 13 times and not drawn a walk this season.

I'm not sure exactly when the name change will go into effect, but I thought I'd get used to typing it now.

Meanwhile, Trevor Stephan is still getting used to the MLB. I wrote in the last Pro Hogs update that Stephan hasn't been used in many high-leverage situations, and that remains true. The rookie from Hillsboro, Texas, has made just one appearance since the All-Star break.

He pitched 1 inning, gave up 1 hit and did not allow a run. He also struck out a batter. Stephan came into the game in the seventh inning with Cleveland trailing by two runs. The Indians eventually lost the game to the Houston Astros 4-3.

Like Stephan, Blake Parker has pitched in just one game since the break. He pitched 1 2/3 innings in the same game against Houston.

In fact, Stephan relieved Parker when he came into the game in the seventh inning. Parker pitched lights out, not allowing a baserunner during his outing. Parker, who was called up from Triple-A in June, has lowered his ERA to 2.40.

Brian Anderson, who has been out since May with a left shoulder subluxation, has returned to playing baseball. He began a rehab assignment with Jacksonville, the Triple-A affiliate of the Marlins, last Friday.

With Anderson being placed on the 60-day injured list, he's not eligible to return to the Marlins lineup until Sunday, July 25.

Beeks had Tommy John surgery last August. He is currently listed on the team's 60-day IL.