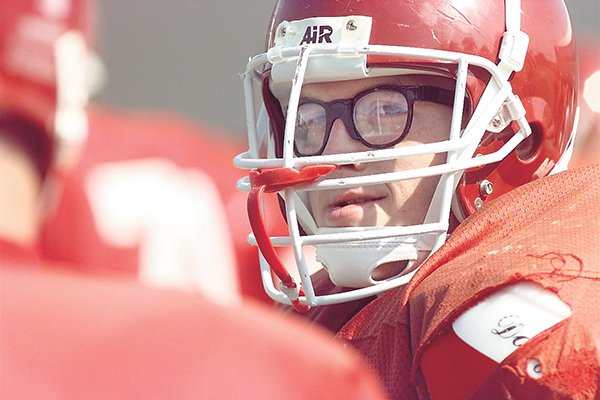 FAYETTEVILLE — A pair of former Arkansas All-America football players are on the ballot for the College Football Hall of Fame in 2022.

Dan Hampton, who played defensive line for the Razorbacks from 1975-78, and Brandon Burlsworth, an offensive lineman from 1994-98, are among the 78 players from the Football Bowl Subdivision on this year's ballot.

The ballot also includes seven former FBS coaches, and 99 players and 33 coaches from divisions other than FBS. The 2022 class will be announced early next year.

Hampton was an All-American as a senior defensive tackle in 1978 when he recorded 98 tackles, including 18 for loss. The Houston Post named Hampton the 1978 Southwest Conference player of the year.

Hampton, who was inducted into the Pro Football Hall of Fame in 2002 following a long career with the Chicago Bears, finished his Arkansas career with 237 tackles and he was named All-SWC twice.

Burlsworth, who began his career as a walk-on, was an All-America offensive guard as a fifth-year senior in 1998. He died in April 1999, 11 days after he was drafted by the Indianapolis Colts in the third round of the NFL Draft.

The Burlsworth Trophy is presented each year to the nation's best player who began his career as a walk-on.

Other notable names on this year's ballot include former Heisman Trophy winners Reggie Bush of Southern Cal and Rashaan Salaam of Colorado. Bush's 2005 Heisman victory was vacated due to NCAA violations.

Arkansas has 16 former players or coaches in the College Football Hall of Fame, which is located in Atlanta.