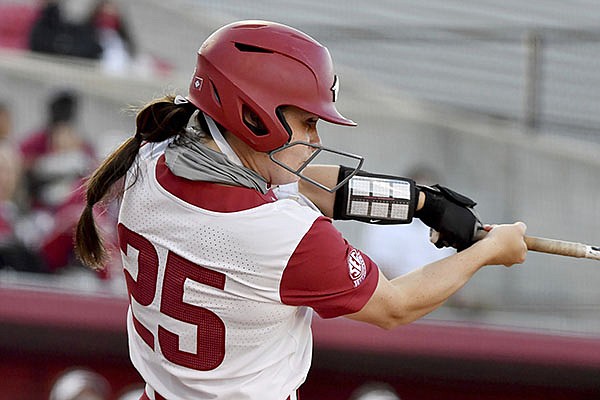 FAYETTEVILLE — Shortstop Braxton Burnside and pitcher Mary Haff were a potent one-two punch in a season full of firsts for the University of Arkansas softball team. They became part of another first for the Razorbacks on Wednesday.

They join Autumn Storms, second team in 2019, and Miranda Dixon, third team in 2010, as the only other Razorbacks to earn All-American honors.

Arkansas Coach Courtney Deifel was excited for her players.

“It’s a really special day for those three and for our program,” Deifel said. “They all had incredible years. Having three All-Americans in one year after just having two previously is just a huge testament to where the program is at right now.

“I’m so happy for them. They so deserve it. If you look at it, we have just under 7,000 D-I softball players, and we had three of the best in college softball. It’s just a really awesome award.”

Burnside put together a record-setting season at the plate, while Haff was dominant in the circle for the Razorbacks, whose season ended last weekend in the super regional against Arizona in Bogle Park. The Wildcats defeated Arkansas 10-4 and 4-1 in the best-of-three series to advance to the College World Series this week in Oklahoma City.

Burnside, a graduate student from Paragould, set a single-season school record with 25 home runs and is currently tied for second in the country in that category. Haff, a junior from Winter Haven, Fla, is among the national leaders in wins with 26 (tied for fifth), and she finished the season as the career leader at Arkansas with 77.

Gibson, a junior, was named to the All-SEC second team and earned all-defensive team honors at first base.

Haff and Gibson will both return next season.

Burnside and Northern Iowa shortstop Sammey Bunch were the country’s only two players to score and drive in at least 50 runs while walking more than 35 times. Four times this season Burnside socked two home runs in a game. She hit five home runs over a three-game stretch in late February. From Feb. 22-April 25, she reached base in 37 consecutive games.

Gibson hit .355 with 15 home runs and 51 RBI. She also had 16 doubles, which are tied for tops in the SEC, and was the only player nationally to post at least 15 doubles and 15 homers during the regular season.

Only regular-season statistics counted during the All-America voting process.

Those three helped lead Arkansas to great heights, including winning a share of its first SEC regular-season title, claiming its second regional championship and hosting its first super regional. The Razorbacks also finished with the top single-season winning percentage (.796) in school history at 43-11 and earned the No. 6 national seed in the NCAA Tournament.

Haff, who already has the single-season record with 29 wins, tied Heather Schlictman for the No. 2 spot.