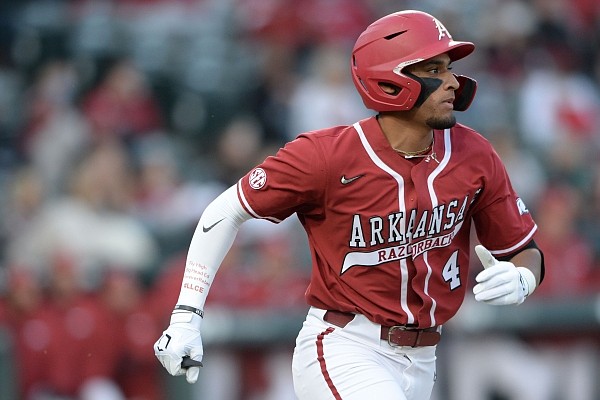 Jalen Battles runs to first base on Friday, April 2, 2021, during an inning of play against Auburn at Baum-Walker Stadium in Fayetteville. Visit nwaonline.com/210403Daily/ for the game's photo gallery.

FAYETTEVILLE — Fred Battles still views his son, Jalen, as the 10- or 11-year-old shortstop who used to have fun running around Little League fields in San Antonio.

So when veteran college coaches like Dave Van Horn and Louisiana Tech’s Lane Burroughs label Jalen a big leaguer, it is difficult for Fred to comprehend. But he is in awe.

“These coaches have coached all their lives and they see it in my son,” Fred said. “It’s hard for me to see it, but if they said it then I have to believe it, you know? He’s just a kid out there having fun.

“For me, all I want as a parent is for him to enjoy it and have fun.”

In addition to being named the most valuable player of the SEC Tournament, Jalen Battles has had a number of memorable moments in the field and at the plate. In the season opener at the College Baseball Showdown in Arlington, Texas, he finished with three hits and drove in three in Arkansas’ 13-9 victory over Texas Tech.

His first home run of the season was something of a statement. The two-run home run in the top of the 10th inning at Louisiana Tech gave the Razorbacks a 9-7 lead and helped Arkansas complete its seventh come-from-behind win in 11 games. Then, to end March, Jalen hit a pair of home runs and drove in four runs against Central Arkansas.

Defensively, he may have saved his best glove work for last Sunday’s conference tournament title game. In the fourth inning, he dove right to snare a would-be single, rolled over on his backside and made a throw to Robert Moore at second base to end a Tennessee threat with the Razorbacks trailing 1-0. Razorbacks first baseman Cullen Smith said the play changed the complexion of the game.

He then kickstarted a 6-4-3 double play in the eighth inning with a smooth throw across his body to Moore.

Jalen has made those plays with a heavy heart and while paying tribute to a significant figure in his upbringing and baseball life. Less than one month before Arkansas’ season opener, Ed Perez, a longtime mentor who coached Jalen throughout his youth, passed away due to covid-19. He was 53.

According to Fred, Perez’s funeral was the day prior to the Razorbacks’ first game. Perez grew to mean the world to Jalen, who this season has honored him with four lines of red lettering on a white Nike arm sleeve that he regularly wears on his right arm. 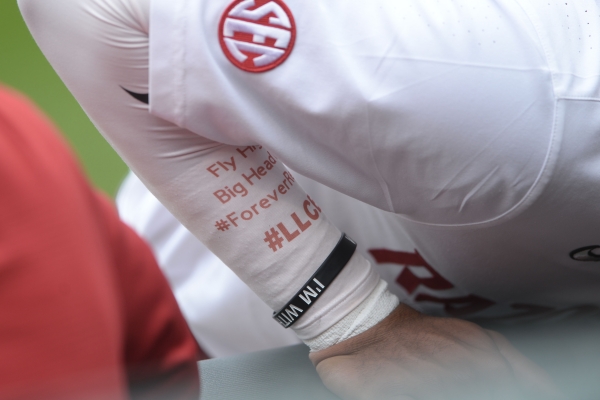 On Jan. 23, the day Perez passed away, Jalen posted to Facebook, “You created a monster on the baseball field and a great person off of it. I’m not who I am or where I’m at today without your guidance. You saw something in me (a scrawny little 7-8 year old) that I didn’t even know was there. I am truly blessed to have had you for so many years, and it HURTS to see you go.

“You will be missed dearly. Please watch over me and everyone who loves you. I love you, big head Ed.”

Jalen began playing baseball at age 9. Until that point, he was all in on soccer and routinely bigger than every player on the field. His parents carried his birth certificate to every game just in case anyone questioned his age. But he was far from aggressive, Fred said, so he offered his son $10 per goal scored.

After that experience, Jalen’s competitive fire emerged. And when neighbors came home one evening, the Battles asked where the family played baseball. It was at Capitol Park Little League, which offers baseball and softball to youth in northeast San Antonio, that Perez saw something in Jalen during tryouts and latched on.

“Jalen had no clue how to play baseball, but Ed said, ‘I want him on my select team,’” Fred said. “From nine years old all the way until he was 16, he was his only coach.

“If anybody in San Antonio believed in Jalen Battles, it was Ed Perez. Jalen Battles was his shortstop. He would fight anybody for him. Compare him to any shortstop in San Antonio, he would say he’s the best he’s ever seen. It was funny because Ed’s son was on the team also. He moved him to second base.

“He always had Jalen’s best interests at heart, and I wouldn’t trade it for the world.” 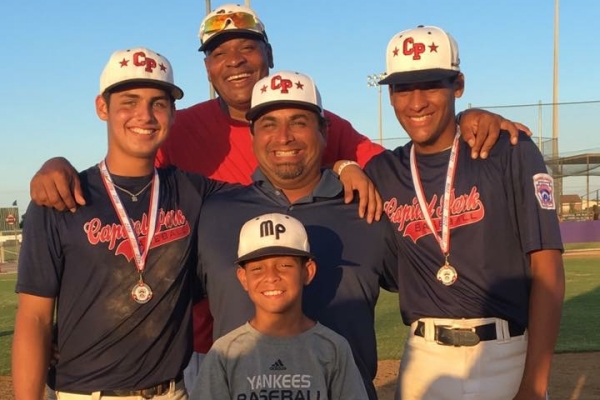 Fred added that it does not surprise him that his son chooses to honor Perez on his arm sleeve. Jalen also remembers a former football teammate who died three days after Christmas, and a travel baseball coach for the South Texas Sliders that he lost two years ago.

Jalen is driven by their memory. Aside from setting the example for his brothers and sisters, including 15-year-old Jeter, playing for lost loved ones is a primary motivation.

In storybook fashion, Perez’s wife, Melissa, was in attendance at the SEC Tournament in Hoover, Ala., and watched Jalen win MVP in person. Over four games, he recorded 7 hits in 13 at-bats and drove in 5 runs on top of several stellar defensive plays.

SEC Network broadcasters on numerous occasions marveled at Jalen’s athleticism. He has always been a superior athlete, Fred said. At 9 years old, he made plays at shortstop that were unusual for a kid his age.

According to his father, Jalen also made 35- and 50-yard field goals as a teenager at the College Football Hall of Fame in Atlanta then went on to be an all-district punter and receiver on his high school team. On the basketball court, he was a shooter.

Jalen received scholarship offers in multiple sports, but he is a baseball player and all he has ever wanted to be is a pro.

“He made it look so easy,” Fred said. “I remember when we were playing with the Rebels and one of the coaches — I was on Jalen pretty hard, because I’m a dad — and he told me, ‘You need to chill. He’s got it. That kid, he has it. If anybody has it, it’s him. You need to chill.’

Van Horn said this week that Jalen has been “amazing” for Arkansas all season. He would put his shortstop’s defensive numbers up against any other player at the position nationwide.

“That is a premier position. It's very hard to play it,” Van Horn said. “You have a lot of things to take care of there. The best fielders and throwers usually go to that position, and that's all the way up to the big leagues and all the way down to pee wee league.

“The defense has been off the charts. … I've seen him really make improvement and strides with the bat. He listens. He's very coachable. In the clubhouse, he's fun. Guys gravitate to him.”