Razorbacks aced teams that made postseason 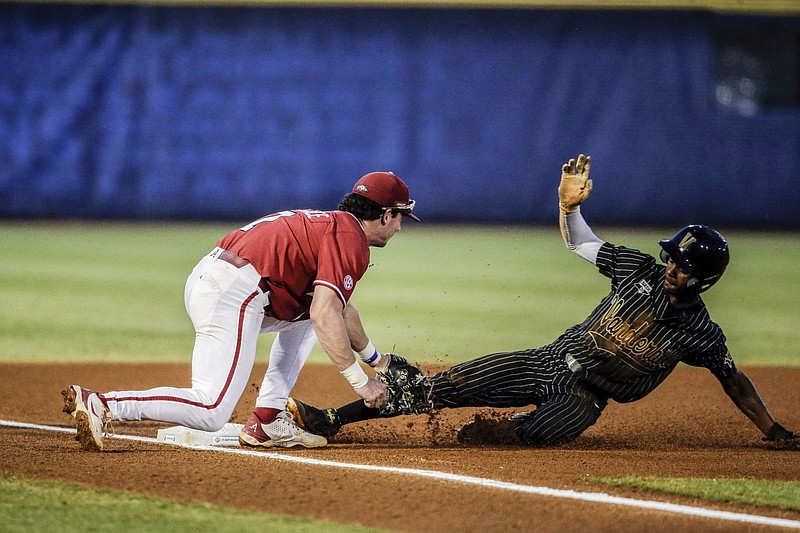 Vanderbilt's Enrique Bradfield Jr. (51) is tagged out by Arkansas third baseman Cayden Wallace (7) as he slides into third base during the first inning of an NCAA college baseball game during the Southeastern Conference tournament Thursday, May 27, 2021, in Hoover, Ala. (AP Photo/Butch Dill)

FAYETTEVILLE — More than half of the No. 1 Arkansas Razorbacks’ baseball games this season have been against 13 teams that joined them in the NCAA Tournament field.

The University of Arkansas (46-10) has played 34 games against NCAA Tournament teams, and the Razorbacks are 28-6 in those matchups.

When the top eight seeds were revealed on the NCAA Tournament selection show Monday on ESPN2, it looked like Arkansas’ schedule.

In addition to the No. 1 seed Razorbacks, the other seven top eight seeds included six Arkansas opponents: No. 2 Texas, No. 3 Tennessee, No. 4 Vanderbilt, No. 6 TCU, No. 7 Mississippi State and No. 8 Texas Tech.

What in the world was Razorbacks Coach Dave Van Horn thinking by not scheduling No. 5 seed Arizona?

Of Arkansas’ first 20 games, 16 were against teams in the NCAA Tournament.

“It seemed like every time we looked up we were playing one of the top 25 teams to the point where we didn’t even know anymore,” Van Horn said. “It didn’t matter. We were just playing a good team.

“I don’t know if we’ll ever play a tougher one. It’s just the way it worked out. We were just fortunate we got out to a good start against some really good teams and we kept it up.”

Arkansas opened in the College Baseball Showdown in Arlington, Texas, by beating Texas Tech, Texas and TCU to set the tone for a dominating performance that has continued week after week, including SEC regular-season and tournament championships.

When Arkansas infielder Cullen Smith steps into the batter’s box Friday, it won’t be the first time he has faced NJIT starter Tyler Stafflinger.

Smith also faced NJIT’s star reliever Jake Rappaport during a series in Johnson City, Tenn. Rappaport hit Smith with a pitch. Smith was 2 for 8 with 3 walks, 4 runs and 5 RBI during the three-game series against NJIT.

The SEC leads all conferences in the NCAA Tournament’s 68-team field with nine teams. The ACC is second with eight teams, followed by the Pac-12 with six.

The Big 12 and Conference USA each have four teams, and the Big Ten has three. Conferences with two teams each are the Atlantic Sun, Big South, Big West, Metro Atlantic and Missouri Valley.

“I’m glad to see nine got in,” Arkansas Coach Dave Van Horn said. “I was hoping for 10. I feel bad for Georgia.”

“It’s interesting how they figured out how they were going to take [Alabama] over [Georgia],” Van Horn said. “LSU deserved to be in. They sent them way out to Oregon, but I’m sure they don’t care.”

All reserved and general admission tickets have been sold for this weekend’s regional, but a limited number of student tickets remain on a first-come, first-serve basis for all games except Friday’s opener between Arkansas and NJIT.

Student tickets will go on sale at 9 a.m. Saturday and 9 a.m. Sunday for games the same day.

The University of Arkansas will permit tailgating in parking lots around Baum-Walker Stadium this weekend. Parking lots will open four hours prior to the start of each day’s first game.

Katy is part of the Houston metropolitan area and about a 10-hour drive from Fayetteville. There also are flights from Houston to Northwest Arkansas Regional Airport.

“Their family will be in attendance,” Highlanders Coach Robbie McClellan said. “I think they’re going to have about 100 people there.”

Each school is allotted 200 tickets, so there should be enough to cover the Marcano twins’ family members.

“They’re amazing kids,” McClellan said. “They both have a shot to get drafted. They both graduated from the honors college [in engineering]. It’s harder to get into than an Ivy League university, so they’re brilliant kids and they’re great athletes. They’re pretty much a coach’s dream as student-athletes.”

Steve Lenox will call play-by-play and Lance Cormier will be the color analyst for all of the regional games on ESPN platforms.

Attendance is expected to be greater than 11,000 for Arkansas’ home regional games this weekend, but they won’t be the largest crowds the Razorbacks have played in front of this season.

On Feb. 21, Arkansas played Texas in front of an announced crowd of 17,587 at Globe Life Field in Arlington, Texas, which was tied for the largest attendance at a college baseball game this season. A game between Texas Tech and Ole Miss on the same day in Arlington had the same announced attendance.

The Razorbacks have played in 10 of the 21 most-attended games this year, according to the NCAA — one game against Texas, TCU and Texas Tech in Arlington on opening weekend Feb 20-22; three games at Ole Miss on April 10-11; three games against Florida at home on May 20-22; and the SEC Tournament championship game against Tennessee on Sunday.

Arkansas’ announced crowds of 11,084 for each game of the Florida series were tied for the 13th largest at a college baseball game this year.

NJIT has the fourth-longest win streak in college baseball. The Highlanders have won nine consecutive games beginning with a 2-0 win over Binghamton in the second game of a doubleheader May 15. NJIT defeated Binghamton three times, Maryland-Baltimore County four times, and Albany and Maine once during the streak. Three of the wins have been by one run.

VCU’s 21-game win streak is the nation’s longest. Wright State has won 13 straight games and Duke 12 in a row.

Arkansas’ eight-game winning streak is tied with Central Michigan and UC Santa Barbara for the fifth-longest in the country. The Razorbacks have not lost since Tennessee’s Max Ferguson hit a three-run home run in the ninth inning to win 8-7 on May 15.