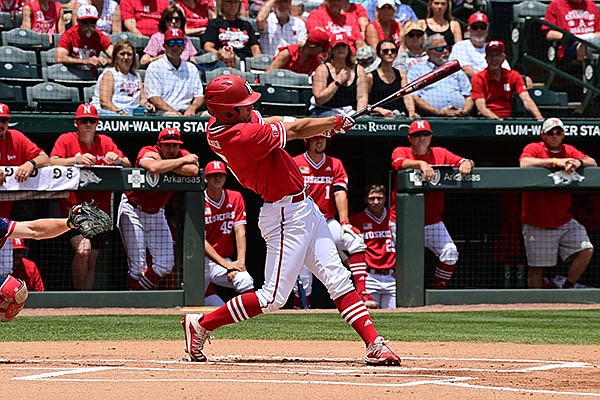 Nebraska outfielder Joe Acker hits a triple during the first inning of an NCAA regional game against NJIT on Sunday, June 6, 2021, in Fayetteville.

FAYETTEVILLE — The top two seeds are the last ones remaining at the NCAA Fayetteville Regional.

Nebraska defeated NJIT 18-4 Sunday afternoon at Baum-Walker Stadium to advance to the regional championship against Arkansas. The Cornhuskers and the Razorbacks are scheduled to play Sunday at 8 p.m.

Arkansas, which defeated Nebraska 5-1 on Saturday, would win the regional with a victory Sunday night. The Huskers must win Sunday night to force a winner-take-all game Monday.

Nebraska Coach Will Bolt said the Cornhuskers were feeling good going into the game against Arkansas.

Nebraska (33-13) scored eight runs in the bottom of the fourth inning to break the game open after NJIT pulled within 2-1 on Matt Cocciadiffero’s leadoff home run in the top of the inning.

The Huskers sent 12 batters to the plate in the fourth. Cam Chick was hit by a pitch to lead off the inning and he capped the big inning with a two-out inside-the-park home run.

The Huskers recorded 19 hits and tied the program record for most runs in an NCAA postseason game. Nebraska defeated Eastern Michigan 18-2 in a home regional in 2003.

"You've got a lot of guys feeling pretty confident going into the game tonight at the plate," Bolt said. "We were on the barrel up and down the lineup. We didn't give away many at-bats. I think we were very competitive."

Joe Acker set the tone at the plate with a leadoff triple in the first inning. Acker added a solo home run in the third inning to put Nebraska ahead 2-0.

Acker finished 4 for 5, walked once and was a double shy of hitting for the cycle. Acker, who scored four runs, said he was looking forward to a rematch with the top-ranked Razorbacks (48-10).

"When you're in Little League and you're growing up, these are the games you dream about," Acker said. "A chance to play the No. 1 team in the country in a primetime game in front of a big crowd.

Shay Schanaman (5-2) threw 107 pitches and lasted seven innings to save Nebraska’s bullpen. Caleb Feekin and Braxton Bragg threw an inning apiece in relief for the Huskers.

Vurpillat was pulled in the fourth inning for Croix Jenkins, who allowed 6 runs and 7 hits in 2/3 of an inning.

Nebraska advanced to a regional championship for the first time since 2007. The Huskers have not won a regional since 2005 when they went to the College World Series.

Bolt said Nebraska third baseman Max Anderson, the Big Ten freshman of the year who pulled his hamstring running the bases on Saturday night, could be available to pinch hit against Arkansas.