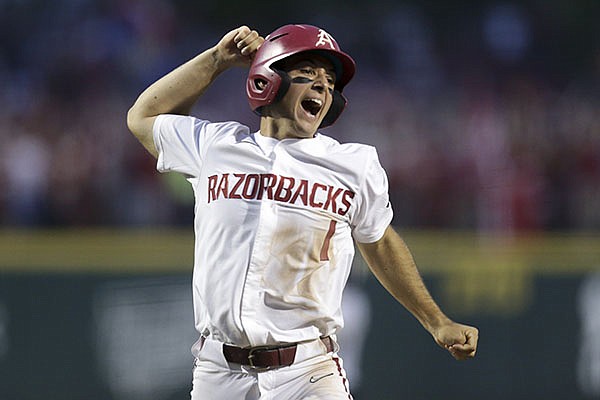 Arkansas second baseman Robert Moore celebrates as he runs toward home plate during the eighth inning of an NCAA regional game against Nebraska on Monday, June 7, 2021, in Fayetteville.

Several Arkansas baseball signees were thrilled by the Razorbacks’ dramatic 6-2 victory over Nebraska.

Arkansas reliever and Collegiate Baseball Newspaper national player of the year Kevin Kopps pitched 7 scoreless innings and struck out 8 to earn his 12th win, and pinch hitter Charlie Welch hit a 3-run home run to put the game out of reach in the eighth.

“Baum-Walker Stadium is the best college baseball atmosphere by far,” said Smith, a Baseball America top 50 prospect. “I thought Kopps did amazing and proved again why he’s the best pitcher in college. As soon as I saw Welch came in I knew they were going to win. He’s really good in the clutch.”

Infielder Peyton Stovall, 6-0, 195 of Haughton, La., was overjoyed by the win that allows the Hogs to host North Carolina State for a super regional at Baum-Walker this weekend.

“The game was one of the most electric games I’ve watched all year,” said Stovall, who is one of MLB Pipeline’s top 150 prospects for the 2021 draft. “There’s nothing else to say about Kopps other than he better win the Golden Spikes Award. Welch has been clutch in pinch hit situations all year and of course he came through with another big one.

Shortstop Drake Varnado, 6-1, 180 of IMG Academy in Florida was on the MaxPreps National Player of the Year watch list.

“The game was awesome. Personally, it makes me eager to suit up as a Hog,” Varnado said. “As far as Kopps goes, he’s gross. It’s a little different watching him over the screen, but as a hitter you know if a guy looks nasty on TV, he’s 10 times nastier in person.

"In my opinion, Welch is one of if not the best teammate on the team. Every time he’s called on, he’s mentally ready to help the team. I’m sure Opitz has groomed him, and next year he will make a strong run to be starting catcher.”

Right-handed pitcher Austin Ledbetter, 6-2, 200, of Bryant is looking forward to the super regional.

“It was a great team win,” Ledbetter said. “They battled and had big hits throughout the game. Kopps was electric as usual, and Welch’s bomb was big time. Excited for the coming up weekend.”