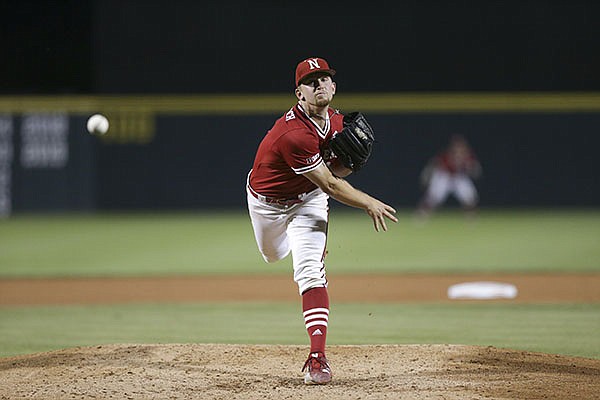 FAYETTEVILLE — Asked how he felt physically after Nebraska’s 5-3 victory over Arkansas on Sunday night in the NCAA Fayetteville Regional, an exhausted smile came to Spencer Schwellenbach’s face.

Pitching for the second time in three days, Schwellenbach, who started the second meeting with the Razorbacks at shortstop, shut down Arkansas’ offense over the final 4 2/3 innings to earn his third win of the season and force a winner-take-all game on Monday at Baum-Walker Stadium.

The right-handed Big Ten player of the year allowed only 1 hit while striking out 4 and walking 2.

After entering the game in relief of Cornhuskers starter Kyle Perry, Schwellenbach threw 42 of his 65 pitches for strikes and recorded critical outs when Arkansas threatened.

“Schwellenbach was really good,” Arkansas coach Dave Van Horn said. “He came in and threw about 65 pitches. We had a chance to get him on the ropes a couple of times and he didn’t let us, especially there in the ninth. He made some really big pitches when he needed them.

“He pitched us backward a little bit here and there.”

Schwellenbach admitted he was running out of gas in the top of the ninth inning. Arkansas center fielder Christian Franklin drew a five-pitch leadoff walk and third baseman Cullen Smith walked on four pitches with one out to bring the go-ahead run to the plate in Casey Opitz.

Opitz, who went 0 for 4, struck out swinging, and shortstop Jalen Battles popped up to first base to end the game.

It was the second time the Razorbacks left two men on base against Schwellenbach. He entered for Perry with one out in the fifth inning after the starter walked Battles and gave up a single to Matt Goodheart to put runners on the corners.

Schwellenbach, with Arkansas ahead 3-2, struck out Cayden Wallace swinging and got three-hole hitter Charlie Welch to fly out to center field.

"It actually played out the way we planned it out,” Cornhuskers coach Will Bolt said. “Hand it off to Schwelly after Perry. He gave us everything that he had.

“Every last drop of everything in his being, he gave it to his team. Pretty special."

In the home half of the fifth, Schwellenbach singled to left-center field to tie the game 3-3. Nebraska scored three runs in the inning and held its lead.

Cornhuskers catcher Griffin Everitt said he wouldn’t want another pitcher on the team on the mound at the end of a game. Sunday marked the sixth consecutive outing — which covers 9 2/3 innings — in which Schwellenbach allowed one or fewer hits.

He has not given up an earned run since May 1 against Rutgers.

“He was dominant. He’s always dominant for us. He’s been our guy all year,” Everitt said. “He’s got some velocity. He’s got a plus-slider, he’s got a plus-changeup, he locates all of them and can throw them for whatever.

“He’s always keeping hitters off balance, and to add on to it it's hard to time up his fastball as well.”

The Razorbacks’ four hits were their fewest in a game since a 6-2 loss at South Carolina on April 23 and were tied for second fewest all season.

“We had some chances to drive in some runs, we didn’t do it,” Van Horn said. “Give Nebraska’s pitcher credit. They got out of some jams. They just outplayed us and they beat us, and they’ve been here all day. Just disappointed with that.

“But we still have another opportunity (Monday), so we just need to regroup and play better.”