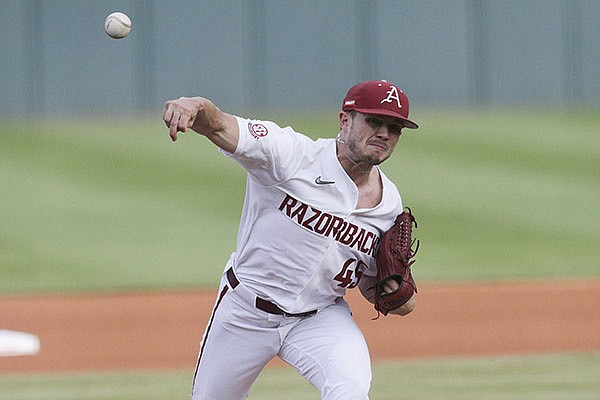 FAYETTEVILLE — SEC pitcher of the year Kevin Kopps has gotten a lot of work on a lot of weekends this year.

But nothing compared to the heavy pitching load the right-hander carried to send top-ranked University of Arkansas into the NCAA super regionals with a 6-2 win over No. 19 Nebraska on Monday.

Kopps (12-0) threw 90 pitches over the final seven innings, holding the Cornhuskers to no runs on three hits and no walks as the Razorbacks rallied from a 2-0 deficit in front of 11,084 nervous fans at Baum-Walker Stadium.

“Obviously what a clutch performance by Kevin Kopps,” Arkansas Coach Dave Van Horn said. … “I felt like he got better as the game went on.”

“I’ve never seen anything like it as long as I’ve been in college baseball,” Bolt said. “To have a guy that’s able to go out there and compete at such a high level in such an environment on this stage and to do it over and over and over. There’s a reason he’s a national pitcher of the year. The guy … he was incredible today.”

Kopps, already named national player of the year by Collegiate Baseball, earned MVP honors at the NCAA Fayetteville Regional after throwing 185 pitches and having a hand in all three wins for the Razorbacks.

The 24-year-old earned the win in the Razorbacks’ 13-8 victory over NJIT in the regional opener, then notched his 11th save behind Patrick Wicklander in Saturday’s 5-1 win over Nebraska. Kopps got the day off on Sunday during Nebraska’s 5-3 win, but he was ready to roll for the long haul on Monday and he did not want to come out.

Kopps has never entered a game as early as he did on Monday, and he has never had to work seven innings.

Van Horn said Kopps spoke to pitching coach Matt Hobbs between every inning in the tunnel connected to the Razorbacks’ dugout.

“He kept asking if I could go and I kept saying I could,” Kopps said.

Kopps entered behind starter Jaxon Wiggins with Arkansas trailing 1-0 and in a third-inning jam following consecutive walks with no outs. The Cornhuskers used a sacrifice bunt and an RBI ground ball to get ahead 2-0, but Kopps kept the Huskers at bay the rest of the way.

“Kevin has more innings, but I kind of compared him to that a little bit,” Van Horn said. “The difference is that Kevin’s 24 and that individual was 21.

Kopps, who has touted his fitness regimen and beet juice for aides to his durability, warmed up in the ninth inning on Sunday, so he threw every day at the regional.

“I had [a] conversation with Coach Hobbs before the game where he asked how many innings I could give him,” Kopps said. “I said, ‘three,’ but then we always say a number, and it’s usually more. So I was kind of expecting it to be more.”

The Cornhuskers got a pair of singles right up the middle in the fifth inning, a one-out shot from nine-hole Logan Foster and then a two-out hit from Jaxon Hallmark. Kopps retired Spencer Schwellenbach, who joined him as the all-region relief pitchers, on a ground ball to shortstop to escape the inning.

“Early on I thought maybe he wasn’t quite as sharp maybe from being a little tired, but it just felt like he got better and better as the game went along,” Bolt said. “He made big pitches. I feel like we kind of had our shot there with a two-out hit in the fifth inning, but he got off the field and that was it.”