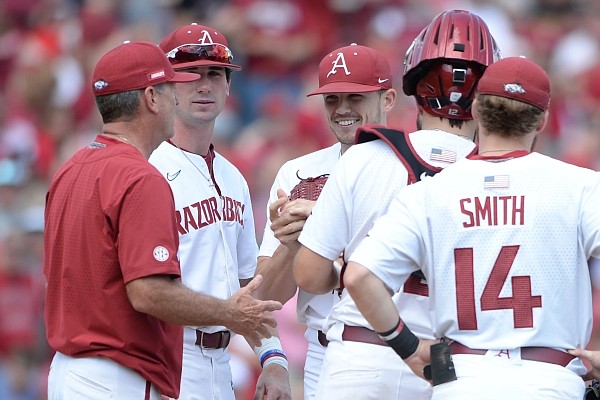 Arkansas coach Dave Van Horn (left) speaks Friday, June 4, 2021, with reliever Kevin Kopps as he enters the game with two outs in the fourth inning of the Razorbacks' 13-8 win over New Jersey Institute of Technology.

It was 2-0 Nebraska after the top of the fifth inning, and Baum-Walker Stadium was booming like the home team was leading by a dozen.

There seemed to be little doubt and tons of confidence that the Arkansas Razorbacks would win. It is what they have done all season.

No team had swept them and surely Nebraska, out of the Big Ten, wouldn’t be the first.

The Razorbacks got one run in the fifth and tied it in the sixth, and there was sheer joy in Hogville.

By the time pinch hitter Charlie Welch hit his three-run homer that should have sent the Cornhusker bus drivers out to start their vehicles, it was time to think about North Carolina State and yet another College World Series appearance.

They call them OmaHogs for a reason.

Whether or not that happens, this will have been a great season for the Razorbacks, 49-11 and champions of the SEC regular season and tournament.

Something else was happening Monday night.

It was Cinderella’s ball and there would be no midnight.

No one could have ever imagined relief pitcher Kevin Kopps would have the season he had, let alone a record-setting night to advance the Hogs.

Kopps is 24, a sixth-year player that included a redshirt year, a season off for Tommy John surgery and an 8.18 ERA in just seven appearances during the coronavirus shortened year.

When he was coming out of high school, he was ranked one of the top 1,000 prospects in the country. That’s almost worse than a two-star football recruit.

He was a 6-foot string bean until he was urged to hit the weight room, which he did with a vengeance.

Most likely he was being counted on as a weekend starter last year but instead went the wrong way on the mound. It was not an accident and it didn’t take long for Kopps to figure it out.

Kopps made changes and the ball was wildly more active.

This season was magical.

Monday night was the most magical.

As a closer this season, he’s 12-0 and was named Collegiate Baseball’s national player of the year. He has pitched 79 2/3 innings this season, the most on the team.

Against Nebraska, he entered the game in the third inning, and he left when the last out was made, allowing only 3 hits, no runs and striking out 8 in 7 innings.

Yes, as he always does, before taking the mound he took a sip of beet juice.

That’s his good luck ritual, and by about the seventh inning, Baum-Walker Stadium could have sold out of the pickling juice if it had any.

His every movement was watched by every eye.

If his shoe had come untied, 11,000 fans would have raced onto the field to help him.

As great as his effort was, it was still a team effort.

Dave Van Horn went with a lineup that had four lefties and two switch-hitters.

No matter what Nebraska threw at him, he was ready.

This is one of his best teams he’s had because they were hand-picked and assembled by a staff that knew what it wanted.

To go through the SEC, which had six teams advance to a super regional, and not get swept once reeks of great teamwork.

Teamwork starts with the 6 inches between the ears, and Van Horn has this group thinking team 24-7.

Sure there are heroes like Kopps, but every player at some point in this season has made a difference.

The best part for the fans were they were not only super competitive, they were fun to watch and believe in.