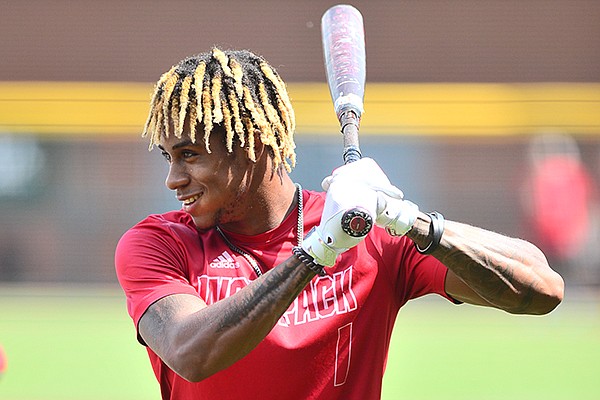 He is thrilled the next step goes through Arkansas.

“I’m just happy to be here, great ballpark, tremendous baseball environment that we will be seeing in a short period of time,” Avent said. “It is a great fanbase with very kind people that love the Razorbacks so we are happy to be here.”

No. 1 Arkansas (49-11) and North Carolina State (33-17) will start the best-of-three-game NCAA Fayetteville Super Regional series with a 5 p.m. game Friday.

Avent was asked if his team, which is 19-3 in road games this season, would be ready for the challenge Baum-Walker Stadium and a crowd of more than 11,000.

“I don’t think you can’t ever prepare for anything like that,” Avent said. “ As hard as you can try to prepare, you can’t really do it. It comes down to the players. Our players have overcome a lot of things.”

One of those was playing without large crowds helping to generate energy.

“All baseball players want to play in front of crowds. And you’d rather have them pulling for you than against you, but you still want the crowd there. I think it’s going to be something they’re going to look forward to.

“I’m sure there’ll be some jitters early but you’ve got to settle into the game. That’s where the maturity of our team and the leadership of our team will take over from there.”

NC State designated hitter Terrell Tatum called Arkansas' stadium "one of a kind." Tatum's father, Terrance, and older brother Terry played for the Razorbacks. Terrance Tatum was a running back from 1982-85, and Terry Tatum redshirted on the Razorbacks' baseball team in 2013.

"I've actually spent a lot of my time watching a lot of the Arkansas games, and a lot of the SEC teams," Terrell Tatum said. "So seeing the crowds they all pull, all the fans that show up for them day in and day out, no matter if they're playing well or not is unbelievable.

"So to see Arkansa being ranked the No. 1 team unanimously throughout the whole season, I just can't imagine what this weekend is going to bring for us.

While Arkansas pitcher Kevin Kopps (12-0, 11 saves, 0.68 ERA) has earned the respect of Avent, he is quick to note the Razorbacks are more than a one-man team.

“He has kind of gotten so much publicity lately for what he has done for this team all year, but as we get to the postseason, it becomes more recognizable and it gets more attention,” Avent said. “What he has done is unbelievable and amazing.

“But what you can’t do is look at a ball club that you are going to play in the postseason and look at just one player. That have a great ball club, a lot of good pitchers. This isn’t just going to be against Kevin Kopps, it is going to be a great Arkansas team. He is one of many good players on this team.”

“Tremendous catcher,” Avent said. “He epitomizes the word catcher. And he’s really good, surely one of the best defensive catchers in the country and that’s always a plus when you’ve got a complete ball club like Arkansas.

“He is a very steady and non-emotional guy, a pitcher who competes although you might not see it outwardly that much," Avent said. "But great competitive spirit and he probably has the make up of most of the guys on this team.”

While Arkansas' offense was spotty during last weekend’s regional, Avent knows the Razorbacks’ offense is dangerous.