In Opitz, Razorbacks have trust 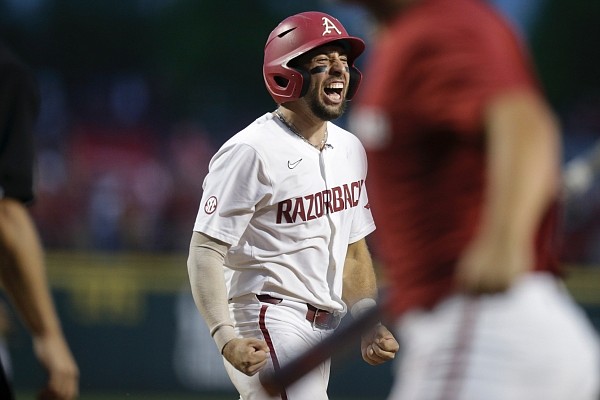 Arkansas catcher Casey Opitz (12) reacts as he runs home for a score, Monday, June 7, 2021 in the eighth inning of the NCAA Fayetteville Regional at Baum-Walker Stadium in Fayetteville. Check out nwaonline.com/210608Daily/ for the photo gallery.

FAYETTEVILLE — University of Arkansas senior Kevin Kopps, the SEC pitcher of the year and Collegiate Baseball’s national player of the year, gives catcher Casey Opitz a lot of credit for his success.

“He makes my job a lot easier, and he puts me at ease when he’s back there,” said Kopps, who is 12-0 with 11 saves and 0.68 ERA going into the Razorbacks’ super regional game against North Carolina State tonight. “Calling pitches, I don’t really like to think a lot when I’m on the mound and I trust everything he puts down.

“It helps me to pitch with more conviction, knowing the faith I have in him.”

“I think Casey’s the best catcher in the country,” said junior Connor Noland, who is pitching out of the bullpen after being a starter the previous two seasons. “When you step out there with that guy behind the dish, you can throw anything anywhere and feel comfortable.

“His enthusiasm behind there, I think that’s what people miss out the most. He’s fist bumping. He’s doing everything he can to get you going.”

Lael Lockhart, a senior graduate transfer from Houston who has been a weekend starter most of the season, said he’s glad for the opportunity to work with Opitz.

“You couldn’t ask for anybody better behind the plate,” Lockhart said. “If there’s someone I want to pitch to, it’s Casey Opitz, 100%.”

When last year’s MLB Draft was shortened from 40 to five rounds because of the coronavirus pandemic, Opitz wasn’t selected, though he indicated he could have been picked by agreeing to a signing bonus offered by some teams.

“If my pro career has to wait a year for us to win a national championship, then I’m more than happy to do so,” Opitz said last fall.

The No. 1 Razorbacks (49-11) have work to do to win their first national championship in baseball, but it’s already been a historic season.

Opitz, a senior from Centennial, Colo., has started at catcher in 51 of 60 games. He also made a start at first base — in the nightcap of a doubleheader at Ole Miss — but he got behind the plate in that game.

“I feel like nationally, there’s not a better receiver in college baseball. Without Casey, we wouldn’t be where we are.”

Opitz has thrown out 11 of 29 runners attempting to steal a base. Perhaps more impressive than his 37.9% throw-out rate is the lack of attempts when he’s catching – 0.56 per game.

“He keeps guys in check,” Lockhart said. “No one is going to run on him.”

In the SEC Tournament, Opitz threw out the only two runners who tried to steal against Arkansas — both at third base.

Nebraska didn’t attempt a steal in three games against Arkansas in last weekend’s regional and NJIT didn’t have an attempt in its game against the Razorbacks.

“He epitomizes the word ‘catcher,’ ” North Carolina State Coach Elliott Avent said when asked about Opitz. “Surely one of the best defensive catchers in the country and that’s always a plus when you’ve got a complete ballclub like Arkansas.”

“I thought he had a really mature approach,” Van Horn said. “Once he got back to campus, he wasn’t pouting around, thinking, ‘I shouldn’t be here. I should be in the minor leagues or in offseason right now.’

“He just came here and he was Casey Optiz. The same Casey Optiz we always knew with a smile on his face. Really, really good leader.

“I couldn’t have asked for any more from him, honestly. It’s been a pleasure to have him in our program. I’m just glad we got to be around him another year.”

Opitz, a switch hitter, is batting .254 with 2 home runs and 15 runs batted in, but he’s shown the ability to come through on offense.

When Arkansas beat Florida 4-3 on May 21 to clinch the SEC championship, Opitz led off the ninth inning with a double and wound up on third base because of a fielding error. He scored the winning run on Charlie Welch’s double.

In the Razorbacks’ 6-2 victory over Nebraska on Monday night in the regional championship game, Opitz hit a home run in the fifth inning to cut the Cornhuskers’ lead to 2-1 and drew a walk to load the bases in the eighth inning when Arkansas scored four runs, capped by Welch’s three-run home run.

In 2019, Opitz had game-winning hits against Missouri and Tennessee and the go-ahead RBI in a victory over Vanderbilt. In the deciding game of a super regional against Ole Miss he went 3 for 3 with 4 RBI in the Razorbacks’ 14-1 victory.

“He’s just got that knack to come up with the big hit,” Van Horn said.

Opitz said his approach is not to put pressure on himself.

“Just another at-bat, just another pitch,” he said. “Can’t take in the whole environment and the situation or else it’s going to get to you too much.

“Same thing this weekend. Relax, take what the game gives you. If it gives you something good, do what you can with it and go from there.”

Van Horn and pitching coach Matt Hobbs have so much trust in Opitz that he calls almost every pitch.

“It seems like the zone opens up every time Casey is behind the plate,” Lockhart said. “He’s going to steal you [some strikes] whether it’s a ball or two off, up, down, left, right. He just makes it easier on you.

“You don’t have to think about pitches because you know he’s already two steps ahead, thinking everything through. You’ve just got to rare back and let it fly.”

The NCAA granted baseball players an extra season of eligibility because of the coronavirus, but with the draft being 20 rounds in 2021, it’s a given Opitz will be picked and sign a pro contract.

“When the season finally does come to an end, it’s going to be tough watching No. 12 walk out the door to be honest with you,” Van Horn said. “He’s been amazing.

“I’ve had some great catchers, and he’s as good or better than anyone I’ve ever had.”