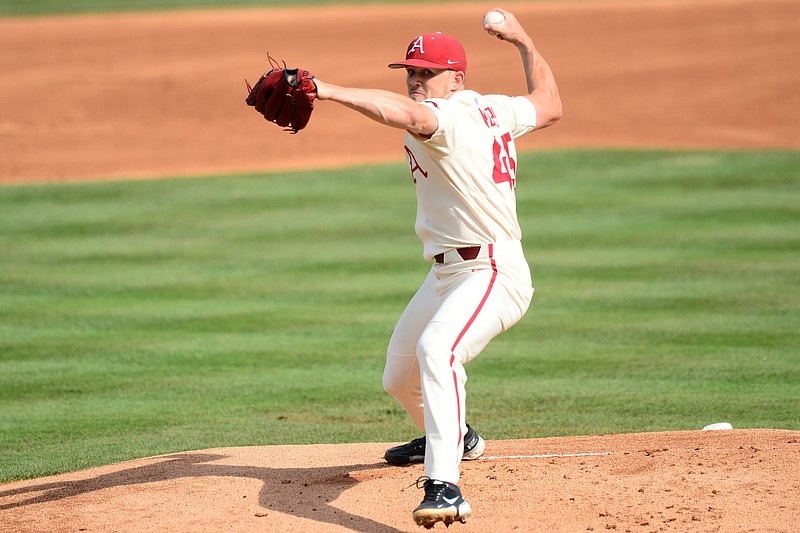 FAYETTEVILLE — A dream season came to an end Sunday night for Arkansas.

The top-ranked Razorbacks lost 3-2 to North Carolina State in Game 3 of the NCAA Fayetteville Super Regional to fall one win short of the College World Series. The Wolfpack (35-18), a No. 2 seed during the regional round, advanced to its third College World Series and first since 2013.

Arkansas, which spent most of the season ranked atop the major college baseball polls, finished with a 50-13 record. The Razorbacks lost consecutive games for the first time since March.

NC State shortstop Jose Torres hit a solo home run to lead off the ninth inning against Arkansas ace Kevin Kopps, who made his first start of the season. The hit gave the Wolfpack the winning run and ended Kopps’ game after 118 pitches.

Kopps, who threw 21 pitches Saturday, suffered his first loss of the season. He finished the year with a 12-1 record and 11 saves, and an ERA of 0.90.

Arkansas tied the game 2-2 in the seventh inning when Cayden Wallace homered against Chris Villaman with two outs. The Razorbacks missed on a number of other scoring opportunities. Arkansas stranded the bases loaded in the second inning and left runners in scoring position in the third and fourth.

Arkansas went ahead 1-0 on Charlie Welch’s two-out double down the right field line in the second inning. That scored Christian Franklin, who reached on a leadoff error by Wolfpack third baseman Vojtech Mensik.

Welch's double accounted for the only run scored against NC Starter Matt Walladsen, who pitched 4 innings, allowed 2 hits, walked 4 and struck out 4.

NC State took a 2-1 lead in the top of the third inning when Jonny Butler blasted a two-run home run with two outs against Kopps. Austin Murr, who walked with one out, also scored.

Kopps settled in for several innings afterward. After throwing 57 pitches in the first three innings, the right hander needed 57 to get through the next five innings.

He struck out NC State clean-up hitter Terrell Tatum to strand two base runners in the eighth inning. He finished with 7 hits allowed, 3 walks and 9 strikeouts.

It appeared that Kopps’ eighth-inning strikeout might be his final pitch, but he emerged out of the dugout for the ninth to face Torres, who homered in all three games of the super regional.

Torres hit a hard foul ball on the second pitch he saw from Kopps in the inning, then hit a no-doubter to left field to stun the majority of the crowd of 11,084 at Baum-Walker Stadium.

Kopps was lifted for Patrick Wicklander, who worked around a hit to strand a runner at third base. Wicklander threw 99 pitches in the Razorbacks’ 21-2 victory over the Wolfpack on Friday.

NC State tied the series with a 6-5 win Saturday.

Welch and Casey Opitz grounded out for the first two outs of the bottom of the ninth, and the game ended when Jalen Battles made contact on a check swing and was thrown out at first base.

The Razorbacks fell short of making the College World Series for a third consecutive postseason, and their loss ensured the No. 1 seed in the NCAA Tournament will not win a national championship for the 21st consecutive season.

Miami, in 1999, was the last top seed to win the championship.

Welch works the count to 2-2 and then grounds out to the third baseman.

Opitz grounds out to short for the second out.

Battles has a check swing that is fielded by the catcher and thrown to first for the final out.

Kevin Kopps gives up an absolute bomb to left field, and the Wolfpack take the lead. Kopps is done and Patrick Wicklander is coming in to try and limit the damage.

Wicklander got Luca Tresh to ground out to shortstop for the first out of the inning, Devonte Brown to ground to Cullen Smith, who made a terrific back-hand play, then gave up a two-out double to Vojtech Mensik.

Wicklander's first pitch to J.T. Jarrett skips away from Casey Opitz, moving Mensik to third, but he got Jarrett to ground out to short to end the top half of the inning.

Charlie Welch, Opitz and Jalen Battles are due up for Arkansas in the home ninth.

Evan Justice in for NC State. He finished out the game against Arkansas yesterday.

Franklin strikes out swinging for the first out.

Moore flies out to left-center field for the second out.

Kevin Kopps back out for the ninth.

Jarrett leads things off with a single through the left side. Murr bunts him over to second.

McDonough hits a line drive to Wallace in left field. Wallace backed up and leaped at the wall to haul it in for the second out.

Arkansas elects to intentionally walk Butler to get to Tatum.

After a meeting with his head coach Tatum strikes out swinging to end the inning. Wicklander was throwing pretty hard during that inning so it'll be interesting to see who comes back out in the 9th.

Battles grounds out up the middle. NC State had him played perfectly with the shift. Goodheart works a full count and then lines out to left field.

Cayden Wallace shoots one over the fence in left field and this game is tied.

Slavens with an 11-pitch at-bat before he grounds out right into the shift.

Kevin Kopps is back out for his 8th inning of work.

Once again Kopps sets down NC State in order. He gets two strikeouts and a flyout to right to end the inning. The flyout to right was caught by Goodheart as he lunged and jumped on the warning track.

Cullen Smith lines out to center to start the inning.

It didn't matter that inning, but Arkansas is 1-9 with runners in scoring position today.

Kopps with a 1-2-3. He's up to 89 pitches today. Patrick Wicklander is throwing softly in the Arkansas bullpen so we'll have to see if Kopps goes back out there.

Kopps registered two groundouts and a strikeout in that inning.

Chris Villaman in to pitch now for the Wolfpack.

Wallace gets his second hit of the super regional with a single to left. He was 1-10 against NC State before that hit. It's the second time the Hogs have gotten the leadoff batter on base. Franklin reached on an error earlier and scored.

Slavens strikes out swinging for the first out.

Franklin strikes out looking for out number two.

Moore strikes out swinging to end the inning.

Jarrett goes the other way and hits a looping single to right field.

Murr hits a grounder to Battles who gets the out at second by himself and then throws to Battles who scoops the ball out of the dirt for the second out.

Kopps then gets McDonough looking to end the frame.

Walladsen has settled down here in the fourth inning he gets Smith to groundout to first. The first baseman made a great diving play to stop the ball and get back to the bag. Welch strikes out swinging and that brings up Opitz.

Opitz drops down a bunt against the shift and it works. The bunt wasn't as far down the line as Opitz would have probably liked, but the pitcher couldn't make a good throw and he reaches safely.

Battles walks on four pitches to bring up Goodheart with two outs and two on.

Willadsen strikes out Goodheart on a full count and he's very excited. He runs off the field jumping.

Kopps with a eight pitch inning to get the Hogs back in the dugout. He is up to 65 pitches on the day. Nobody is warming in the Razorback bullpen.

He got a first pitch groundout to third, a two-pitch flyout to right and a flyout to left to end the inning.

Matt Willadsen opened the home third with a strikeout of Cayden Wallace, who is 3 for 25 since the beginning of regional play, then got Brady Slavens to ground out to second base.

Christian Franklin worked a two-out walk in six pitches then stole second on the first pitch to Robert Moore, who eventually grounded out to first on the eighth pitch he saw.

Kopps strikes out Jarrett swinging to begin the third.

Murr walks and McDonough strikes out looking and Murr steals second on the pitch. A good throw would have gotten Murr, but the throw was high.

And the high throw comes back to hurt the Hogs as Butler goes yard over the right-center field fence to give the Wolfpack the lead.

Tatum follows with a single up the middle.

Torres flies out to left to end the inning.

Franklin starts things off with a grounder to third. The third baseman Mensik misplays it and Franklin beats the throw.

Moore pops up to the third baseman and Smith hits a slow roller to the right side. The pitcher picks it up and steps on first. Franklin moves to second.

Welch just sneaks one down the right field line that rolls to the corner. Franklin scores and Welch glides into second base standing up. Hogs take the lead first for the second time this series.

Battles walks and bring out the beer hats. Bases loaded for Matt Goodheart.

Willadsen falls behind 2-0 to Opitz and NC State's pitching coach comes out to talk to him.

Opitz walks on four pitches to bring up Battles.

Goodheart grounds out to second to end the inning. Good job there by Willadsen to limit the damage, but he threw 33 pitches that inning.

Kopps gets the next batter to ground into a 6-4-3 double play to erase the walk.

He then bounces back with a 2-2 swing and miss to end the inning.

Goodheart swings through a ball in the dirt for the first out of the inning.

Slavens just misses hitting a breaking ball a long ways. Instead it's a flyout to left for the second out.

Slavens grounds out to first for the third out.

Kopps allows two hits in the inning, one to right field and the other was an infield grounder that was deep in the hole at shortstop, but nothing doing for the Wolfpack. Kopps strikes out one, gets a flyout and a groundout to end the inning.

The winner of Sunday’s game will advance to the College World Series. The loser’s season will end.

Arkansas advanced to the super regionals by going 3-1 in a home regional against NJIT and Nebraska.

NC State won the Ruston (La.) Regional with a 3-0 record against Alabama and No. 16 overall seed Louisiana Tech….The Wolfpack went 19-14 in ACC play after a 1-8 start. NC State finished second in the ACC regular-season standings and was runner-up at the ACC Tournament.

Avent coached NC State to the College World Series in 2013, which was the program's first appearance there in 45 years.

Arkansas is looking to advance to its 11th College World Series and third straight. The Razorbacks went to Omaha in 2018 and 2019. No tournament was played last year.

Arkansas relief pitcher Zebulon Vermillion will return to the 27-man roster this week. Vermillion was held out of the regional with arm soreness. Vermillion replaced Caleb Bolden on the roster. Bolden is nursing arm soreness….Arkansas first baseman Brady Slavens is about 80% of full health, Van Horn said. Slavens returned to action last Sunday after a sprained ankle forced him to miss five games.

NC State designated hitter Terrell Tatum is the son of former Arkansas running back Terrance Tatum, who played for the Razorbacks from 1982-85. Terrell Tatum’s older brother, Terry, was a redshirt baseball player at Arkansas in 2013.