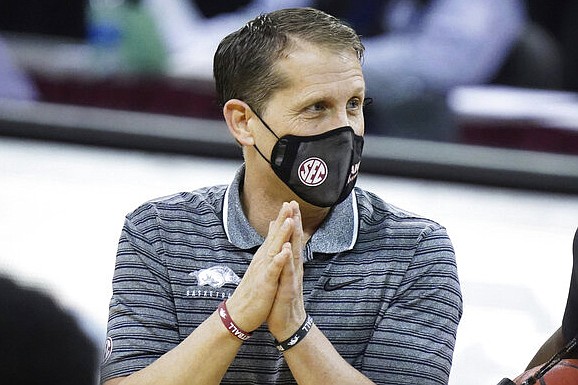 Arkansas coach Eric Musselman talks with an official during the first half of the team's NCAA college basketball game against South Carolina on Tuesday, March 2, 2021, in Columbia, S.C. (AP Photo/Sean Rayford)

FAYETTEVILLE — Arkansas coach Eric Musselman made an addition to his support staff Tuesday.

The Razorbacks’ third-year coach named Mike Ekanem the program’s director of player development. Ekanem previously worked under Musselman at Nevada as the Wolf Pack’s multimedia specialist in 2018-19 and spent the last two seasons as director of scouting at Texas A&M.

“We are extremely excited about Mike being a part of our staff,” Musselman said in a release. “Mike was a great asset to us at the University of Nevada and we look forward to the opportunity to work together again. Mike understands our culture, our philosophies for recruiting and our ‘Xs and Os.’

“Mike also has an NBA background, having worked with the San Antonio Spurs, which will be vital in recruiting and with our current student-athletes.”

A native of Houston, Ekanem served as a special assistant, video coordinator and recruiting assistant over four years at Memphis. Prior to his stint with the Tigers, he was an assistant coach for Louisiana Tech’s women’s basketball team during the 2013-14 season.

Ekanem also spent six seasons as a basketball operations assistant for the San Antonio Spurs and as director of video and athletic performance for the WNBA’s San Antonio Stars.

Earl Boykins, who held the title of Razorbacks director of student-athlete development the last two seasons, was hired as an assistant coach at Texas-El Paso earlier this month.