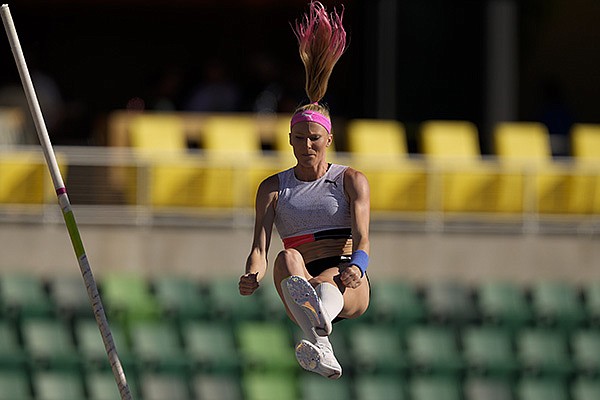 Sandi Morris needed just one attempt Thursday night in the pole vault to advance at the U.S. Olympic Trials at Hayward Field in Eugene, Ore.

Morris, a former University of Arkansas NCAA champion and the 2016 Olympic silver medalist who lives in Fayetteville, cleared 14-9 on her first attempt of the qualifying round after she passed at the first two heights of 14-1 1/4 and 14-5 1/4.

Nastassja Campbell, an Arkansas sophomore and the SEC outdoor champion, cleared 14-9 on her first attempt and also was among the 12 vaulters advancing to Saturday night’s final. She cleared her first attempts at 14-1 1/4 and 14-5 1/2.

Razorbacks senior Lauren Martinez, the NCAA runner-up outdoors, failed to clear any of her three attempts at 14-1 1/4.

Megan Clark, a former Duke All-American who lives in Fayetteville, cleared 14-9 on his second attempt to make the final.

Arkansas junior Jada Baylark, from Little Rock Parkview, finished 18th in the 200 preliminaries and didn’t advance to the semifinals. She ran 23.11.

Razorbacks senior Nick Hilson, from Jonesboro, finished 22nd in the 400-meter hurdles in 51.63 and didn’t advance to the semifinals.