Blair's Aggies have become team to beat in SEC 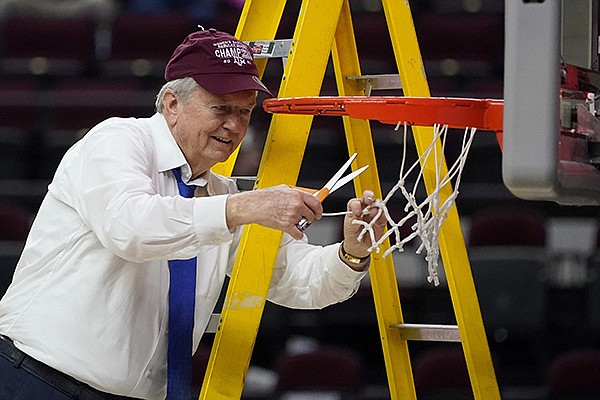 Caught in South Carolina's shadow most of the season, No. 2 Texas A&M has stepped into the spotlight as the women's team to beat in the SEC Tournament.

The Aggies (22-1, 13-1 SEC) captured their first SEC regular-season championship, running past the league's highest profile team in South Carolina 65-57 on Sunday to earn the top seed and favorite's role in tournament that starts Wednesday in Greenville, S.C.

“When this year started, nobody gave us as much credit as a team you had to scheme for,” Texas A&M Gary Blair said. “All we are is just a basketball team.”

One that is ready to continue it's championship run after a very long pause.

The Aggies, only two years after a national championship in 2011, became the first team at their school to claim a SEC crown when they won the 2013 league tournament. But Texas A&M has not gotten past the semifinals in seven tournaments since despite winning 10 SEC games each season but one.

Texas A&M is a team without a go-to scorer like the past three seasons when it featured All-American Chennedy Carter.

“We check the egos at the door and that's everyone of us because of the competition we have to face,” Blair said.

Aaliyah Wilson leads the Aggies with 13.2 points while N'dea Jones is averaging a double-double with 12.2 points and 10.5 rebounds.

But the road to the title won't be easy with six SEC teams among the top 17 in the national rankings.

The Gamecocks began the year at No. 1 and won 31 straight SEC games the past two years before the streak ended at No. 14 Tennessee last month.

Still, South Carolina has won five of the past six league tournaments and, despite a reduced capacity of 3,000 fans due to the coronavirus pandemic, are still just a two-hour drive from campus with strong support when they play.

“The sun rose and so shall we,” Gamecocks coach Dawn Staley Tweeted on Monday following the Texas A&M loss.

The Gamecocks have some of the SEC's top performers in Aliyah Boston (13 points, 11.7 rebounds a game) and Zia Cooke (15.9 point average) and will motivated to avenge the loss to the Aggies.

“We’re a program that moral victories, moral comebacks, that is not a part of our program," Staley said. “We’re expected to win championships.”

Some other things to watch at the SEC Tournament:

The SEC is deep and talented and it's hard to count out any team among the top six. No. 14 Tennessee is seeded third. No. 16 Georgia is fourth. No. 17 Kentucky and No. 13 Arkansas feature two of the league's best players in the Razorbacks' Chelsea Dungee and the Wildcats' Rhyne Howard, the player of the year.

Alongside Texas A&M, Arkansas is one of the hottest teams in the SEC coming into the tournament having won five straight games and eight of their past nine. The Razorbacks' lone loss in that stretch was to the Aggies 69-67 last month. As they have all season, Arkansas has done it with offense. It's fifth in the country and tops the SEC at 84 points a game. While Dungee tops the league at 22.2 points a game, Destiny Slocum has averaged 15.6 points and Amber Ramirez 13.8 for the Razorbacks.

It's been seven years since Tennessee won the league tournament, the longest drought in program history at an event it used to to dominate. The Lady Vols won 17 tournament crowns between 1980-2014, but has not made the semifinals since 2016. Tennessee hopes to change that this season.

The SEC Tournament, as the league has done much of the regular season, will have a smaller field with Vanderbilt having opted out of the season in January due to the pandemic. The 13-team field means only one first-round game, between 12th-seeded Florida (10-12, 3-11) and 13th-seeded Auburn (5-18, 0-15), instead of two.

The pandemic will hold down what's been a strongly attended event in South Carolina — especially when the Gamecocks are chasing a championship. There were 7,715 fans for the final session in 2017 when South Carolina defeated Mississippi State 59-49 and 9,971 people in the building as the Gamecocks won last year's title 76-62, again over the Bulldogs. The Bon Secours Wellness Arena holds 15,951.