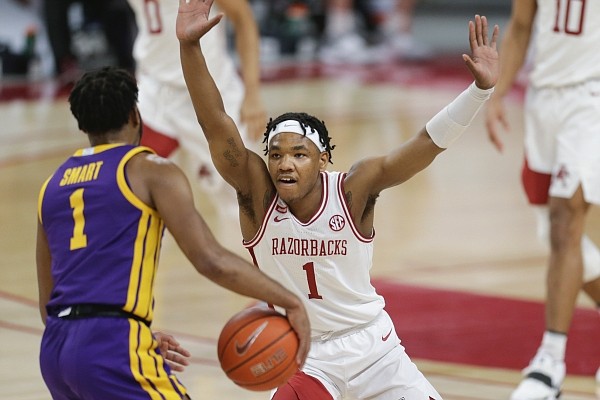 Arkansas guard JD Notae (1) blocks LSU guard Javonte Smart (1), Saturday, February 27, 2021 during the first half of a basketball game at Bud Walton Arena in Fayetteville. Check out nwaonline.com/210228Daily/ for the photo gallery.

The tangible benefit to the University of Arkansas’ nine-game SEC winning streak is a corresponding rise way up the NCAA’s NET rankings to a season-best No. 19 and strong projections for the Razorbacks’ NCAA Tournament seeding.

CBSSports.com’s Jerry Palm updated his tournament projections on Monday and boosted the Razorbacks up to a No. 3 seed, joining Florida State, Houston and Villanova on the line.

ESPN bracketologist Joe Lunardi’s latest projection listed Arkansas as the top No. 4 seed in the field, with Oklahoma, Texas and Virginia following the Razorbacks on the same line.

The Razorbacks are one of six SEC teams projected to make the field by most analysts, though Missouri, Tennessee and LSU are trending in the wrong direction.

Palm projected SEC regular-season champion Alabama as a 2 seed, and has these SEC teams in his field: 6 seeds Florida and Missouri, 7 seed Tennessee, and 10 seed LSU.

Lunardi also put Alabama on his No. 2 line on his bracket from last Friday, with the same SEC teams joining the Crimson Tide and the Razorbacks: 5 seed Tennessee 7 seeds Florida and Missouri, and 9 seed LSU.

The voting for SEC player of the year promises to be intriguing, with league champion Alabama having multiple candidates and its best all-around player, Herbert Jones, not being a stat monster.

(82.3). The Razorbacks also have dark-horse contenders in forward Justin Smith

LSU boasts the league’s top scorer in freshman Cameron Thomas (22.8), who also owns an SEC-best 87.9% free throw rate, but he has teammates in Javonte Smart and Trendon Watford, both averaging 16.1 ppg, who could split votes.

(16.5 ppg) and Iverson Molinar (16.3) but the Bulldogs are in the bottom half of the league standings.

Sophomore Jaden Shackleford is Alabama’s leading scorer at 14.1 points per game, but he’s not a rebounding or assists machine.

Vanderbilt’s Scotty Pippen Jr. (20.5) and South Carolina’s AJ Lawson (17.4) rank two and three in SEC scoring, but their teams are near the bottom of the league standings.

SEC road teams have enjoyed a season like no other during conference play in 2021. Road teams maintained a record around the .500 mark for much of the early portion of conference play, though it has dipped to 46-57 (44.7%) entering the final week of the regular season.

SEC champion Alabama has the league’s best road record at 6-2, a big reason why the Crimson Tide capped their first regular-season title since 2002 with a 64-59 win over Mississippi State in Starkville, Miss. on Saturday.

Arkansas, Florida and Mississippi State all have 4-3 SEC road records, while Kentucky, Missouri and Tennessee are all 4-4.

The teams with the worst records at defending their home courts in SEC play are understandably at the bottom of the SEC standings.

Cellar-dweller Vanderbilt is 2-6 at Memorial Gym, the same .250 winning percentage as Texas A&M (1-3), which has not played at Reed Arena in more than a month, since a 78-66 loss to LSU on Jan. 26, due to its long-lasting covid-19 issues and postponements.

Texas A&M Coach Buzz Williams said Monday that the Aggies would be able to practice that day because they had no positive covid-19 tests on Sunday. Texas A&M has not played since downing Kansas State 68-61 on the road on Jan. 30 in the Big 12/SEC Challenge, losing six games due to covid-19 issues and a seventh because of the freak winter storm around the Valentine’s Day weekend.

“What I can say is so far, so good,” Williams said. “There are still tests that need to be completed regarding the virus, and depending on those, we will have a decision on our Wednesday game vs. Mississippi State.” Williams outlined what went on with his program in February.

“Today is March 1, and we’re praying March is better a better month than February for our program,” he said. “The only time we practiced with every player last month was on February.

The rest of the month, we only had eight practices and did not have a full squad.” Williams said he and the program are “trying to process what has gone on as this has never happened. That’s not being negative towards anybody in our program, but there is no playbook on what to do when this occurs.

“When you miss seven games because of covid-19 and another game because of the worst snowstorm in the history of Texas, and all of those eight cancellations come in 28 days, it’s tough. I seek discernment on how I can treat and help them each day, even though they’re all in different places.”

Florida Coach Mike White was clearly displeased with the background noise going on in the interior of Rupp Arena following his team’s 71-67 victory over Kentucky on Saturday.

White responded to the first question on his post-game video conference by saying, “There’s a bunch of noise behind us. I think I got most of your question.” Later, White flinched when the clanging sounds of long, metal poles hitting the floor, rang through the interview room.

Florida guard Tre Mann and Arkansas guard Moses Moody were named SEC players of the week by the league office on Monday.

Mann, a 6-5 guard from Gainesville, Fla., averaged 20 points, 10.5 rebounds, 2 assists and 1.5 steals in wins at Auburn and Kentucky, including his first career double-double with 19 points and 13 rebounds at Auburn. He became the first Florida player to lead the team in points and rebounds in consecutive road wins since 1970.

Moody averaged 21 points, 6.5 rebounds and 4.5 assists in wins over No. 6 Alabama and LSU, with most of his damage coming from the free-throw line, where he was 27 of 33 in the two games.

This game more than any in the early week contests has a chance to impact the double bye scenarios for the SEC Tournament. It is the only meeting of the regular season between well-regarded SEC teams trending in opposite directions. Missouri has lost 4 of 5 since dealing Alabama its first league loss, 68-65, on Feb. 6. Florida has won 7 of 9 and 3 in a row since back-to-back losses to South Carolina and at Arkansas sandwiched around two postponements.

2 – Ranked SEC teams in No. 8 Alabama and No. 12 Arkansas after Tennessee and Missouri both fell out of The Associated Press Top 25 poll on Monday

19 – Years between regular-season conference championships for Alabama, which last won the SEC in 2002 before being ousted as a No. 2 seed by Stan Heath-coached Kent State in the NCAA Tournament

From top to bottom

“I’m really proud of our guys. It’s not easy to win SEC Championships. I thought our kids played really hard, the hardest we’ve played in a long time. … These seniors will go down as one of the best groups to ever come through here.”

“They’re fired up. They were the other night too, at Auburn. … To win at Rupp Arena, under any circumstances, is a pretty neat thing. To win on the road in the SEC is really hard, but this place is obviously very, very difficult, and Kentucky has been playing really well.”