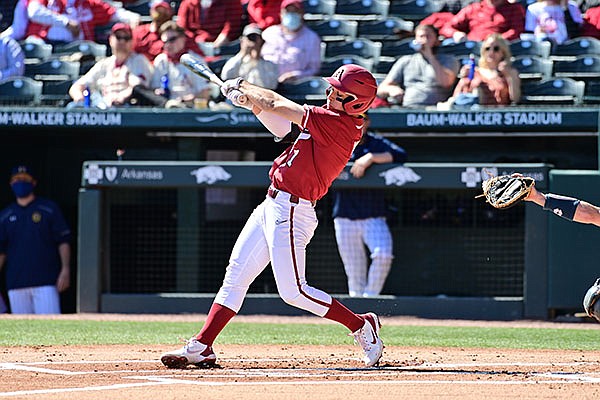 The No. 1 Razorbacks rallied from an early 4-0 deficit to win its ninth consecutive game to start the season. Arkansas has won 13 straight dating to last season, which is tied for the program’s longest win streak in 11 years.

Christian Franklin’s three-run double in the bottom of the fourth inning gave the Razorbacks a 6-5 lead and they didn’t trail again. Franklin also had an RBI single in the sixth inning as part of a 3-for-4 day at the plate.

Arkansas got back into the game on Cullen Smith’s three-run home run in the bottom of the second inning, which was one of three homers for the Razorbacks on Saturday. Zack Gregory hit a solo home run in the sixth to extend Arkansas’ lead to 7-5, and Brady Slavens hit a two-run homer in the eighth to give the Razorbacks an 11-6 advantage.

Blake Adams pitched 2 1/3 innings in his first appearance this season to earn the win for Arkansas. Adams allowed 1 run on 3 hits and struck out 2.

Zebulon Vermillion, the Razorbacks’ No. 1 starter to begin the season, pitched the final 2 1/3 innings to earn the save. Vermillion allowed two hits and struck out one.

Perkins lines out to right for the first out.

Battles moves to his left and vacuums up a grounder for out number two.

Robert Moore dives and stops a ball in the hole, but can't get a throw off before the runner gets to first. It's a two-out single.

The runner advances to second on catcher's indifference.

The left fielder Braydon Webb makes an impressive catch diving into the fence for the final out.

Christian Franklin led of the inning with a single and after two flyouts Brady Slavens hits a ball that lands in the Razorback bullpen to give the Razorbacks two more runs.

Opitz pops up to the catcher to end the inning. Arkansas has scored in 5 of 8 innings today. They've scored at least two runs in 4 of 8 innings.

Vermillion on the mound for the 9th.

Vermillion works around a 1-out single to strand a runner at first base and keep the Razorbacks' three-run lead. A line out to Battles began the inning. Crump singled, but was left on first after a fly out and a strike out.

Slavens singled and Opitz walked to start off the 7th. Cullen Smith bunts a ball up the third baseline that is fielded by the pitcher, but the first baseman can't handle the throw and the bases are loaded for Battles. Smith definitely did his job plus some on that bunt. It was in a great location.

Battles hits a grounder up the middle. Smith is out at second, but it scores a run.

Charlie Welch pinch hits for Zack Gregory with one out, and strikes out looking. Battles steals second on the pitch.

Moore pops up to the second baseman in short right field to end the inning.

Vermillion back out for his second inning of work after getting the last out last inning. Only Blake Adams has gotten six outs or more for the Razorbacks on the mound today.

Elijah Trest walked the leadoff batter and he eventually comes around to score. The runner advanced to second on a wild pitch and then scored on a two-out single to left.

Trest's day is done and Zebulon Vermillion comes in for the Hogs.

Vermillion gets a short pop up to Moore at 2nd to end the inning.

Cullen Smith leads off the inning with a walk. Jalen Battles flys out to the shortstop in short left field. Smith tries to steal second, but is thrown out. Zack Gregory then hits a home run off the new building in right field to give the Razorbacks an insurance run.

Moore walks on four pitches and that prompts a mound visit from Murray State, but Jones is staying in the game.

Moore steals on the first pitch to give the Hogs a runner in scoring position with 2 outs.

The aggressive running pays off for the Hogs as Franklin hits a single into right and scores Moore.

And that is it for Jones, Jordyn Naranjo comes in to pitch for the Racers

Goodheart hits a jam shot past the third baseman to put runners at the corners, but Wallace grounds out to the shortstop to end the inning.

Monke walks the first batter he faces and his day is done. Elijah Trest comes in for the Razorbacks

McCollough singles after the walk to put runners on 1st and 2nd with no outs. Trest gets the next batter to ground into a 5-4 fielder's choice. Runners on the corners with 1 out. The throw from Wallace to Moore at 2nd was a bit high and Moore didn't have an opportunity to try for two.

Pennington hits a dribbler to Trest on the mound and the runner from third tried to come home, but Trest flips to Opitz for the 2nd out. It was an awkward tag from Opitz but the runner didn't complain.

Trest gets the next batter to pop up to Opitz behind the plate to end the inning.

Arkansas goes in order in the 5th. Wallace hit a ball off the end of the bat that was caught by the first baseman. Slavens then grounded out to first and Opitz flied out to center.

Monke back out for the Razorbacks to work the 6th.

Caden Monke comes in for the Razorbacks to start the 5th.

Monke gets a strikeout, a flyout and a groundout to go with a walk to end the top of the 5th.

Arkansas' pitching staff is still looking for a perfect inning. Adams only face 3 in the 3rd, but that was because of a double play.

Casey Opitz leads off the 4th with a single. He was gotten a hit in every game he has started this year.

Smith gets a good piecer of one, but it's caught by the right fielder for the first out.

Battles worked a full count walk to bring up Gregory and a mound visit from Murray State.

Zack Gregory is hit by a pitch and that will be it for Gardner. Right handed Jake Jones is in for the Racers

Franklin drives a 1-2 pitch to the fence in left center to plate all three runs and give the Razorbacks their first lead of the game.

Franklin's double was his first of the year.

Goodheart hits one on the barrel, but it comes up just short as the right fielder catches it on the warning track to end the inning.

A leadoff single eventually comes around to score for the Racers as they add to their lead.

Adams looked like he was going to get out of the inning after striking out the next two batters, but a stolen base and then a single give the Racers a run.

Adams fastball topped out at 95 mph in that half inning.

Arkansas goes in order in the 3rd. Goodheart flied out to the wall in center for out number 1. Wallace struck out swinging on a 3-2 pitch and Slavens hit a lazy pop fly to center for the third out.

After a leadoff single, Cullen Smith drops a pop up at third. He does flip the ball over to 2nd to get the first out thought.

Adams gets out of the inning with a 3-6 double play. a hard ground ball was fielded by Slavens at first. He stepped on the bag then threw to Battles covering 2nd who tagged the runner to end the inning.

Cayden Wallace pulled a ball down the third base linen to leadoff the inning with a double. Slavens walked and after a Opitz strike out Cullen Smith hit a ball of the scoreboard in right to bring the Razorbacks right back in this game.

Jalen Battles almost tied the game, but his shot was foul down the left field line. He was then thrown out by a step on a ground ball to the third baseman.

Zack Gregory worked a 2-out walk and Moore singled through the left side to give the Razorback two on with 2 out.

Murray State started the inning with a single and a home run to right to give the Racers a 2-0 lead.

Bolden looked like he might bounce back as he struck out the next batter. The Racers next batter doubled, but Bolden got Hudleson to groundout to give the Razorbacks two out.

Then back-to-back doubles gave the Racers their four run lead.

Bolden's day is done and Adams comes in making his first appearance.

Adams gets the first batter he faces to fly out to end the inning.

Bolden got some tough breaks in the inning. Although none of them go down as errors Wallace just missed a fly ball down the right field line, Smith couldn't quite handle a hot shot to him at third and a hot shot single down the first base line was just out of the reach of Brady Slavens.

Robert Moore had a loud out to right center that was caught by the centerfielder against the wall to start the bottom of the inning.

Franklin walked and tried to steal second but was thrown out. He didn't get a great jump. Goodheart strikes out to end the inning.

Caleb Bolden gets himself into and out of trouble in the first inning.

After walking leadoff batter Jake Slunder on five pitches, a wild pitch moved him to second with nobody out.

Blake Adams moved to the bullpen to get loose, but Bolden struck out the next batter, got three-hole hitter Jordan Cozart to groundout and struck out the cleanup hitter to retire the side.

A shaky start for sure, but Bolden was able to right the ship.

It's set up to be a beautiful day of baseball here at Baum-Walker Stadium. The temperature is currently 55, and the wind is not very strong but it is blowing slightly out to right field.

Arkansas' come from behind victory yesterday was the club's fourth such victory this year.

Jaxon Wiggins closed yesterday's game yesterday and picked up his first save of his young Arkansas career. The freshman has not allowed a base runner in three innings this season. He retired the No. 3, 4 and 5 hitters in the sixth inning against TCU and in the 10th inning of the series opener against Southeast Missouri State. Wiggins has recorded seven strikeouts and has thrown only 38 pitches in the three outings combined.

Moore is the first Arkansas player to hit two home runs in a game since Heston Kjerstad hit two against Eastern Illinois on Feb. 16, 2020.

Arkansas has won 12 straight games dating to last season when it won the final four games before the covid-19 shutdown.

The 12-game win streak is the Razorbacks’ longest since the 2010 team won 13 in a row in March and April.