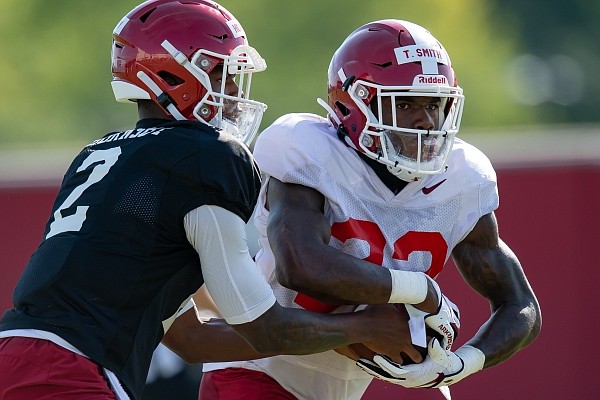 Arkansas running back Trelon Smith takes a handoff from quarterback Malik Hornsby during a preseason practice on Aug. 21, 2020.

FAYETTEVILLE — When Arkansas football opens spring drills on Tuesday, a majority of the attention will be paid to the quarterback position.

While KJ Jefferson, who has two career starts under his belt, Malik Hornsby and others attempt to firmly take hold of the starting job, another position battle will be unfolding right beside them. Razorbacks coach Sam Pittman said Monday in previewing spring drills that Arkansas is searching for its No. 1 option in the running backs room.

The tough and speedy Trelon Smith took the bulk of the snaps at tailback to finish the 2020 season after Rakeem Boyd opted out and began preparations for the upcoming NFL Draft. Smith rushed for a team-high 710 yards and five touchdowns in 10 games.

He returns as the assumed leader of the group, but he has plenty of competition. Pittman noted that many of the team’s running backs are similar in style.

“They're all smaller, quicker, shifty, fast guys,” Pittman said. “We need to find a big back. We have moved (Rahiem) Rocket Sanders to running back. Of course, Dominique (Johnson) is in there as well. Because of the way we're doing it with Javion Hunt coming in and because of the way we're doing it, I think they're going to get plenty of reps and we'll be able to find it.

“We're looking for that guy, and if we can't find that guy — a lot of times if you have three or four good ones you don't have one good one. We're trying to look for that guy.”

The offseason goal for Johnson, a three-star prospect from Crowley, Texas, was to become smaller and drop some weight. He played at 240 pounds in 2020 and appeared in five games, but did not record any stats.

Pittman is a fan, too, of Josh Oglesby, who also runs track for Arkansas. Oglesby suffered a lower-leg injury in the team’s first scrimmage last fall and was limited in practice much of the season.

“He’s come back strong,” Pittman said. “We’re figuring all that stuff out between track and us and all those things in the spring. I like him.”

Sanders, who will wear No. 5 this spring, is an intriguing add to the running backs room. He was a highly sought-after athlete out of Florida who chose Arkansas over the likes of Oklahoma, Florida State and Missouri.

“I like Sanders a lot. He’s never carried the ball and he’s never gotten hit here yet, so we’ve got to find that out there, and we will pretty fast,” Pittman said. “I like Sanders back there because he’s a big back that’s a very physical guy.”

Pittman also touched on the play of T.J. Hammonds, who tallied a handful of big plays in the back end of the 2020 schedule.

In the 50-48 loss at Missouri, he finished with 52 yards rushing on six carries. The previous week, he caught a 51-yard pass from Feleipe Franks against LSU and had one carry for 29 yards.

“We found out (Hammonds) was much more productive in our self-scout when he had the ball in his hands,” Pittman said. “He was very productive later on in the season. We’ve got to get the ball to him a little bit.”

Entering the spring, Smith appears to be in line to start at running back. He has earned the right to lead the position.

Smith rushed for 69-plus yards five times last season and surpassed 100 yards at Florida and Missouri. He caught 22 passes for 159 yards and a score as well.

“We're going to let him go and see if he can continue to improve on what he has done this far,” Pittman said.