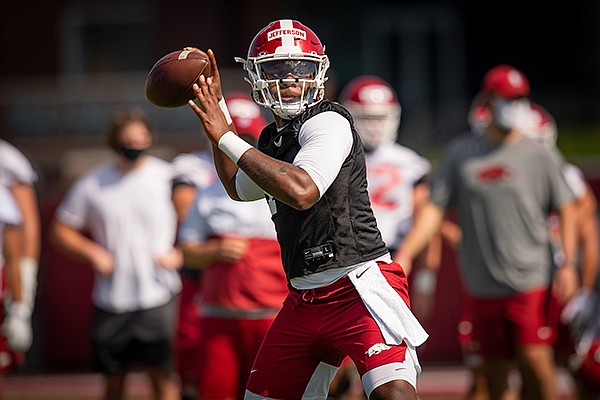 Sam Pittman met with the media via Zoom on Monday to preview the start of spring practice. There were specific questions about goals to improve both the offense and defense.

The general answer to all those questions centered around competition, starting at quarterback where the Razorbacks must replace Feleipe Franks.

However, that quarterback battle begins with a clear leader. Pittman said sophomore KJ Jefferson will open the first practice Tuesday with the first team.

“KJ is our starter,” Pittman said. “But I do anticipate a nice battle (at quarterback).”

Jefferson started the Missouri game last year when Franks was out with rib injuries. Franks returned the next week for the Alabama game and was slated to start the bowl game before TCU opted out.

Jefferson completed 18 of 33 passes for 274 yards and 3 touchdowns against Missouri. He also ran for 32 yards and a 1-yard touchdown. That should and did put him ahead of Malik Hornsby to open spring drills.

Pittman was asked if he’s seen leadership traits from Jefferson in the offseason.

“Yeah, I do,” Pittman said. “The team believes in him. I believe in him.

“He’s done a nice job. He has work ethic and he’s as vocal as he needs to be.

“Feleipe was not real vocal, but he led with his work ethic. That’s what KJ does.”

Pittman said the offense would be split between two fields. Jefferson will take the dominant repetitions with the first team on one field while Hornsby leads the way with the twos on a different field.

“We are going to two spot it, with two fields going at the same time,” he said. “We have the numbers to do that. They will get the same reps.”

The Hogs have plenty of room for improvement in all areas after a 3-7 record, all against SEC opposition. They averaged just 25 minutes in time of possession, a deficit of almost nine minutes per game. They were just 34% on third downs and allowed teams to convert 47% of third downs against them.

Pittman was asked if he liked the run-pass ratio from last year. The Hogs ran it 100 times more than they passed.

“To be honest, we sure would have liked to have run it better on third-and-short,” Pittman said. “We threw more than I like to (throw). You want to make three (or) four yards on first down, but we didn’t and we played behind the chains.

“Evidently, we were not confident enough to hand it off on third-and-short.”

Improvement in the running game might come via quarterbacks with size and ability comparable to a running backs. Jefferson (6-3, 236 pounds) is more of a big-play threat as a runner than Franks.

Pittman said offensive coordinator Kendal Briles has always featured called runs for the quarterback and a heavy diet of run-pass option. Franks ran the ball 105 times last year, but it was not his strength.

“Feleipe was more of a surprising runner,” Pittman said. “He ran better than I thought he was capable of running. Our quarterbacks now are more like running backs. They can throw, too, but we may put in more (running plays) for them.”

Defensively, the goal is to rush the passer better. The Hogs had just 14 sacks last year while giving up 34. Those numbers need to meet somewhere in the middle. Pittman hopes a physical spring will help, but there will be some changes in scheme on defense.

“We want to widen out (the defensive ends),” he said. “We want to get our ends outside the eyes of the (offensive) tackles. We want to bring five at times. We don’t want to sit back and rush three so much.

“We want to try to put a team in a hole. We didn’t much on first down last year when we looked at our self-scout.

“We’ve got some guys who can rush. We need to get them wider. If we are inside, the guards can help chip. We may rush five or six at times. We will have to get better at man coverage (in the secondary).”

“He wanted to do that,” Pittman said of the position change. “We told him he’ll need to get bigger. He’s still injured. He’s been hurt since we’ve been here.”

There aren’t a lot of other position changes. Zach Zimos will be looked at as a possible nickel/outside linebacker and safety. Mike Woods will try the slot position at wide receiver. Shane Clenin would get more time at center to allow Ty Clary, the backup behind Ricky Stromberg last year, to concentrate at guard.

“We know more about our players now,” Pittman said. “I’m not worried anymore that you guys will ask me about someone and I don’t know who he is. A year ago we were guessing.

“We just had a lengthy meeting and we know who our fifth and sixth defensive back is. We learned everyone because with (covid-19), we had to. We used different kids at different spots a lot last year.”

Pittman praised the leadership of the team heading into spring drills, praising the work ethic of the secondary. He made special note of safety Simeon Blair.

"Blair has done some really nice things," Pittman said. "We have leadership in the secondary. That's partly because all of them are coming back.

"(LaDarrius) Bishop, (Jalen) Catalon and Blair are leaders," Pittman said. "Part of what we have in the secondary is the way they are coached. We have two coaches there and also Barry (Odom) is with them and he's the coordinator."