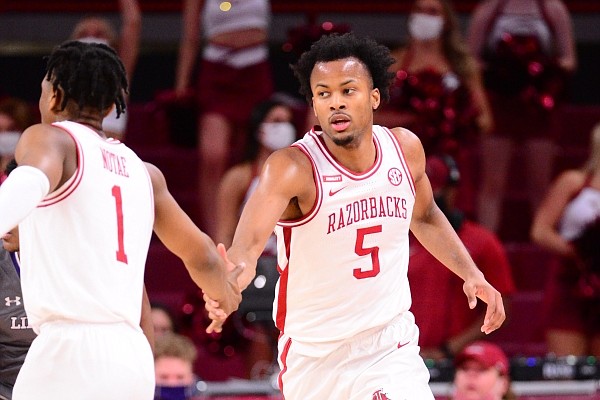 Moody is a consensus All-SEC first-team selection, marking the third consecutive season the Razorbacks have placed a player on the first team by both the league's coaches and AP.

“He’s played as good as any player in the entire country,” Musselman said of Moody on Saturday. “I think when we were recruiting him, we put enough effort in that we thought he’d be one of the best players in the country. It’s paid off that he trusted us and made a decision to come here. I think it’s paid off for Mo and for us.

“I think he’s in the right system. I think there’s a great comfort level with him playing here at Arkansas. I feel an overly strong bond knowing that he had an opportunity to play anywhere in the country and he chose us.”

Moody, who led the Razorbacks in scoring at 17.5 points per game for the season and 17.8 in conference play, was named SEC freshman of the week three times, including in consecutive weeks to close the regular season. He scored 28 points in back-to-back games against South Carolina and Texas A&M last week, and finished with 24-plus points in three of Arkansas’ last four games.

Six of the freshman’s eight 20-plus point performances came in league play. In two games against SEC regular-season champion Alabama, he averaged 26 points and seven rebounds.

"I think he’s continued to get better all season long," Musselman said. "He’s one of the best three-point shooters in college basketball. You saw what he can do defensively.

"He’s a go-to player on one of the two best teams in the league."

Moody is one of six Razorbacks freshmen to lead his team in scoring, joining Johnson, Jonathan Modica, Scotty Thurman, Beverley and George Kok. For the season, he shot 44.1% from the floor and 38.6% from three-point range.

In conference games, Moody knocked down a team-high 35 three-pointers and was a 37.6% shooter beyond the arc. He was also first in minutes played, second in total rebounds with 149 and third in blocks with 10, trailing only 7-3 Connor Vanover and 6-10 Jaylin Williams.

JD Notae, who averaged 12.9 points per game, was named 6th man of the year by the SEC's coaches. He came off the bench in 25 of 26 regular-season games and scored in double figured 18 times, including 20-plus in four games.

Notae led the team in steals with 37.