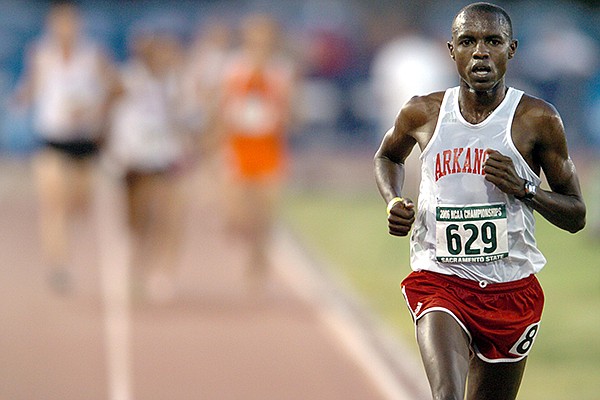 Arkansas' Josphat Boit leads during the men's 10,000-meter run during the NCAA Outdoor Track and Field Championships on Thursday, June 8, 2006, in Sacramento, Calif.

BENTONVILLE — Four runners have committed so far to be members of Northwest Arkansas Community College’s first cross country team, according to a team official.

John Luedtke, a college faculty member and the team’s assistant coach, provided a recruiting update during a meeting of the college’s sports committee Wednesday.

While four runners have committed, the college is hoping for commitments from 12 others. Luedtke said they already have met with nine potential recruits and are scheduled to meet with three more this weekend.

He expects the school’s first signing to be a Rogers High School student.

Luedtke said they have been working hard on recruiting and it’s been challenging.

“Recruiting, there’s nothing like it,” he said. “It’s a science of its own.”

Luedtke said there are still hurdles to overcome, but he’s excited to see where the program is going.

The sports committee’s meeting Wednesday was its second. Its first meeting was Feb. 2.

The Board of Trustees voted 7-1 in November 2019 to start a cross country program to compete in Division II of the National Junior College Athletic Association. It will be the first sanctioned sports team in school history.

Administrators and board members who supported the plan said the cross country program will draw students to the college who otherwise might not enroll. The tuition and fee revenue from those students will make up for expenses associated with the team, estimated at $54,000 per year for a team of 20, they said. The college held forums for faculty and staff to hear the plan.

Grant Hodges, a college spokesman and committee member, said the team will begin competing this fall. Josphat Boit, a former University of Arkansas athlete and coach, has been hired to coach the team. He will make $5,400 in the part-time position.

Todd Kitchen, the college’s vice president of student services and a committee member, said Boit’s first day on the job will be Tuesday. Kitchen said he hopes to have Boit meet with committee members as soon as possible after he begins working.

“I’m excited for the prospect to have a cross country program in my backyard,” said committee member Ryan Pulkrabek. “It’s an incredible thing that’s about to happen for this area.”

Elizabeth Anderson, another committee member, gave an update on team sponsorships. She said a flier is being finalized and they have identified prospects for individual and corporate donors. They plan to compile a master list to track the process.

Anderson said their goal was to get 70% of their fundraising by mid-April, but they may have to adjust the goal.