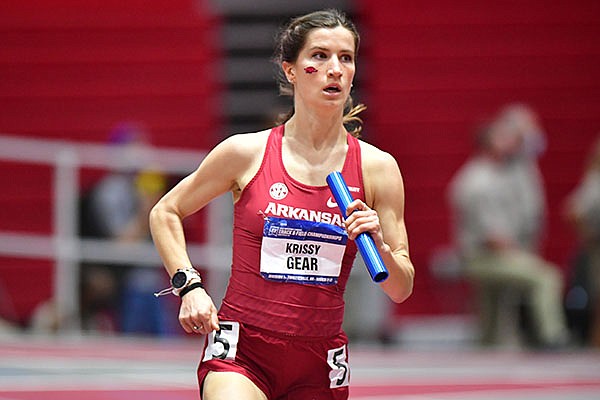 Arkansas' Krissy Gear runs in the distance medley relay during the NCAA Indoor Track and Field Championships on Friday, March 12, 2021, in Fayetteville.

FAYETTEVILLE — The No. 1-ranked University of Arkansas women’s distance-medley relay team turned in a second-place finish to cap Day 2 at the NCAA Indoor Track and Field Championships at the Randal Tyson Track Center on Friday.

The much-needed eight points capped an up-and-down day for the SEC champion Razorbacks, who will enter the final day with 10 points, tied with five other teams in ninth place, 16 points behind leader Texas A&M.

SEC teams hold the top-five positions, with LSU and Georgia tied for second with 23 points. Auburn and Florida are tied for fourth with 14 points apiece.

The 5,000 meters turned against the Razorbacks when Katie Izzo, who had the second-fastest qualifying time entering the meet, finished ninth in 15:58.38 and failed to score.

Izzo pushed to the lead about two-thirds of the way through the race for a few laps, but Auburn’s Joyce Kimeli, the SEC champion, accelerated with her. Eventually Izzo settled back, and the rest of the pack moved ahead.

“The 5,000, that was a race that just is not her style,” Harter said. “She’s used to being out and pounding and making everybody pay, and it became more of an on-off type race. That’s just not her style. That was a blow.”

One of the top highlights of the day came in the long jump, where Texas junior Tara Davis, a transfer from Georgia, wowed the crowd with a collegiate record of 22-9 in the finals, winning the event by more than 9 inches.

Texas A&M’s Tyra Gittens, with 20 points on the board already with wins in the high jump and the pentathlon, was in second place at 21-11 before Florida’s Claire Bryant soared to 21-11 3/4 to edge her out for second place. Gittens has scored all 26 points for the Aggies.

The Razorbacks sent three into the finals of the mile run in the two contrasting heats.

Arkansas sophomore Daszay Freeman used a strong finish over the final two hurdles to win her meet in the 60 hurdles in 8.05, the second-fastest qualifying time behind Texas senior Chanel Brissett (8.04).

The Razorbacks and Texas A&M both pushed two runners into the eight-woman final in the 400, which could play into the final team result today.

The Aggies had the top two qualifiers in freshman Athing Mu (51.02) and Cherokee Young (51.64), while Arkansas sophomore Rosey Effiong (51.82) posted the third-best time and junior Tiana Wilson (52.34) had the eighth.

In the women’s 60, Arkansas senior Jada Baylark had the fourth-fastest time at 7.15 to make the final.

Arkansas also has a chance for good points in the 800 today, as senior Shafiqua Maloney came in third in heat two with a 2:04.50, which was also the third-best qualifying time.

The Razorbacks had hoped to get two scorers in the pole vault, but managed just one point with Bailee McCorkle’s eighth-place finish.

The Arkansas men are tied for 16th with six points through seven of 17 events.

The Razorbacks scored their points Friday with a pair of sixth-place finishes from Ryan Brown in the long jump (25-8 1/2), and the distance medley relay team of Reese Walters, James Milholen, Jadon Bartholomew and Andrew Kibet (9:33.65).

“We were ranked 11th or 12th coming into the DMR, so our guys ran really well,” Razorbacks Coach Chris Bucknam said. “We got a nice anchor from Kibet. He ran a 3:59 mile.”

“We felt like we had a good race plan for Amon, and it just blew up on us,” Bucknam said. “Our goal with Amon was to try to win the race or be in the top two, but the Kiptoo kid went out extremely fast and Amon went with him, and he paid the price.”

LSU is tied with Georgia for the team lead with 20 points.