5 things to know about Colgate 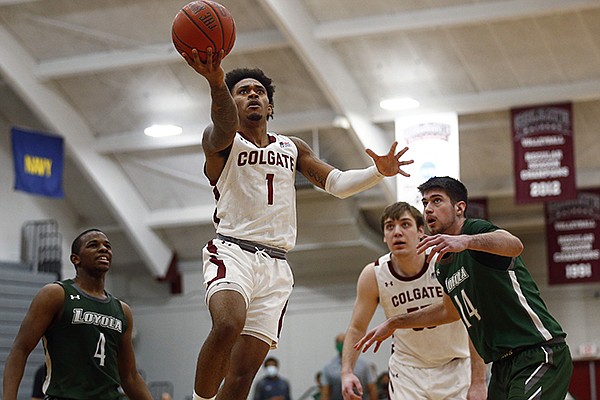 FAYETTEVILLE — Arkansas is playing a Patriot League champion in the NCAA Tournament again.

The Razorbacks are scheduled to play Colgate (14-1) on Friday in the first round. The game will be played at a site somewhere in Indiana, but a final determination on location, time and network has not been made.

Arkansas is the No. 3 seed and Colgate is the No. 14 seed in the South region. The winner of their game Friday will play No. 6-seed Texas Tech or No. 11-seed Utah State on Sunday.

The Razorbacks have played a Patriot League champion twice previously in the NCAA Tournament.

In 2006, the No. 8-seed Razorbacks suffered one of their more memorable first-round tournament losses to No. 9-seed Bucknell, 59-55 in Dallas.

Here are five things to know about Colgate:

Colgate played 15 games against only Patriot League competition this season and enters the NCAA Tournament on a 13-game win streak.

Colgate won the Patriot League Tournament with victories of 77-69 over Boston, 105-75 over Bucknell and 85-72 over Loyola in the championship game. The tournament was played at Colgate’s home arena in Hamilton, N.Y.

According to WarrenNolan.com, Colgate has the nation’s No. 111 strength of schedule. The Raiders played only five opponents, and KenPom ranks Army (No. 189) as the toughest.

Colgate has run roughshod over the Patriot League for the past four seasons when it won 47 more games than it lost. Raiders coach Matt Langel was the Patriot League coach of the year in 2019 and 2020 when Colgate won 20-plus games in back-to-back seasons for the first time.

One player for Colgate figures to be toward the top — if not at the top — of Arkansas’ scouting report entering the teams’ first-round matchup in the NCAA Tournament. That is Jordan Burns.

A senior guard, Burns leads Colgate in scoring at 17.1 points per game on 40% from the floor and 41% from three-point range. He also averages a team-best 5.5 assists and 1.6 steals per game.

Burns has scored in double figures in all but one game this season and poured in 15-plus points 12 times. The 6-0 guard is the Patriot League player of the year and Colgate’s all-time assists leader.

According to KenPom analytics, Burns took 30.6% of the Raiders’ shots when on the floor during the regular season, which ranked second in the conference. Burns also assisted on 32.4% of Colgate’s scores when in the lineup, also second best in the league.

In addition to his high assists numbers over his career, he ranks sixth in program history in scoring, fifth in three-pointers made and is ninth in steals.

Elite beyond the arc

The Razorbacks’ perimeter defense will be put to the test on Friday against the Raiders.

Colgate, according to KenPom data, is the No. 3 three-point shooting team nationally at 40%. Only Baylor and South Dakota State shot better as a team from beyond the arc.

Ferguson leads the team with 35 makes from deep, and he shot 27 of 56 from three-point range during the regular season. Burns and Richardson also knocked down 20.

Colgate has scored 31.5% of its points from beyond the arc this season, and 51.9% inside the arc. The Raiders boast an offense with an efficiency rating of 111.6, per KenPom, which ranks 43rd in the country.

Colgate has taken good care of the basketball as well, turning the ball over on only 13.7% of its possessions. That mark ranks fifth nationally.

The Raiders are second nationally in assist-to-turnover ratio.

The Raiders rank first nationally with 30.5 defensive rebounds per game and second nationally in three-point defense (26.4%).

Colgate’s defense, coupled with its explosive offense, has led to a number of blowouts this season. The Raiders have won three games by 40 or more points and their 18-point average scoring margin ranks third nationally.

In Patriot League games, the Raiders posted a team defensive efficiency rating — a measure of points allowed over 100 possessions — of 92.5, according to KenPom data. That mark led the conference.

Star guard Jordan Burns had a steal rate of 3.1% in conference play, which was good for sixth in the league, and Ryan Moffatt, a 6-6 senior, and 6-5 junior Tucker Richardson also ranked in the top 20 in that category.

Arkansas and Colgate are in the same bracket for the second time. The Razorbacks were the No. 2 seed in the Midwest Region in 1995 when Colgate was the 16th seed in the region.

The Raiders lost as a 16 seed to Kansas in 1995 and Connecticut in 1996. This year’s 14 seed is the highest in Colgate’s tournament history.