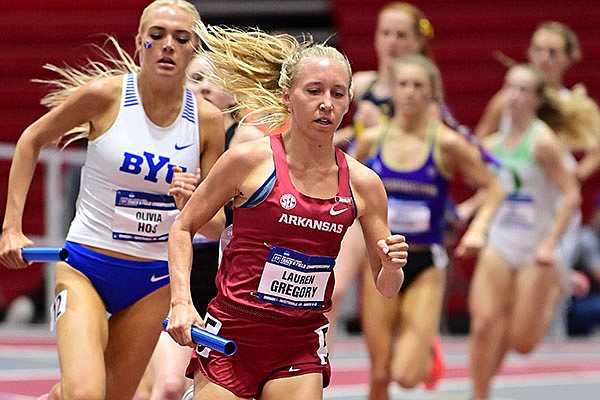 Arkansas' Lauren Gregory runs during the distance medley relay on Day 2 of the NCAA Indoor Track and Field Championships on Friday, March 12, 2021, in Fayetteville.

FAYETTEVILLE — The NCAA championship trophy for women’s indoor track and field is staying at the University of Arkansas.

Including cross country and outdoor track and field, the No. 1-ranked Razorbacks won their fourth consecutive national title on Saturday when they scored 68 points at the Randal Tyson Center to beat No. 2 Texas A&M, which finished second with 57.

Arkansas had the third-highest scoring total in meet history, dating to 1983. Only Oregon with 84 points in 2017 and Texas with 71 in 1988 scored more than the Razorbacks.

Arkansas’ winning streak began with the 2019 NCAA indoor championship. Then came the 2019 outdoor title and in the fall of that school year the cross country title.

The coronavirus pandemic canceled the indoor and outdoor track and field nationals in 2020, but the Razorbacks picked up where they left off in 2019.

Arkansas has won six national titles, including indoors 2015 and outdoors in 2016, in the last seven years.

“Any time you can win anything — especially at the SEC level or at the NCAA level — that’s very exclusive, because everybody is trying to beat you,” said Lance Harter, Arkansas’ women’s cross country and track and field coach. “There are about 330 universities that are sponsoring track and field, and each one of them wants to be successful.

“We’ve got a target on our back with what we’ve done. As I told our kids after the award presentation, ‘Ladies, understand the other universities are having team meetings going, ‘OK, what do we have to try to do to stop Arkansas at the NCAA outdoor meet?’ ”

The Razorbacks became the first women’s team to take the indoor national title without winning an individual or relay event.

“We weren’t good enough to win an event, but cumulatively we were able to amass a lot of points,” Harter said. “That’s a credit to the entire team atmosphere we’ve created where we say, ‘Hey, we’re all in this together.’ It makes us a formidable team.”

The mile was Arkansas’ first event Saturday and Krissy Gear and Lauren Gregory finished 2-3 for the Razorbacks.

Arkansas clinched the title with 17 points in the 3,000 with Gregory taking second, Katie Izzo fourth and Abby Gray fifth.

“They fought their hearts out to put us over the top and assure the win,” Harter said.

The Razorbacks also scored Saturday in the 60-meter hurdles with Daszay Freeman second; in the 800 with Shafiqua Maloney third in a school record 2:01.22; in the 400 with Tiana Wilson and Rosey Effiong sixth and seventh; and in the 60 with Jada Baylark seventh.

Arkansas had enough points to win going into the 1,600 relay.

“We ran that for pride,” Harter said.

Arkansas took third in the relay in a school-record time of 3:28.07 run by Paris Peoples, Morgan Burks-Magee, Wilson and Maloney.

Harter said the only disappointing thing about the meet was that fans weren’t allowed to attend because of covid-19 safety protocols.

“I understand why we couldn’t have fans there,” Harter said. “But one thing that’s really special about Tyson is when it’s a great meet, and especially with the Razorbacks in contention, the fans go ballistic and it’s almost deafening.

“It reminds me of when we played basketball games in Barnhill Arena, and you’d walk out afterwards and your ears were ringing.

“We’ve experienced that at Tyson. You get chills just thinking about it. It’s unfortunate our kids and fans missed out on that.”

Harter said a big part of Arkansas’ success has been the Razorbacks competing for one another.

“It’s become a pattern for us that these kids become so devoted to each other,” he said. “It doesn’t matter what event, they just want to will these things to happen for Arkansas. So it’s a very united front.

“It started a few years ago, and now we’re having our veterans teach the young ones how to fulfill that devotion to each other, and that’s what makes it really special.”