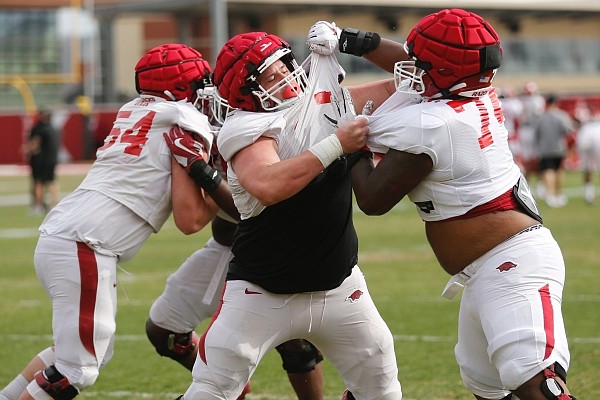 Ricky Stromberg (left) and Jalen St. John participate in a blocking drill during football practice on Tuesday, March 16, 2021, on campus in Fayetteville. Check out nwaonline.com/210317Daily/ and nwadg.com/photos for a photo gallery.

Arkansas junior Dalton Wagner wants to be a part of the baddest offensive line in the Southeastern Conference. That’s a good thing.

Wagner (6-9, 319) and his fellow Razorbacks offensive lineman are being pushed hard during spring practice by coach Sam Pittman and offensive line coach Brad Davis to reach their potential.

“The biggest ones we can probably make is just overall unit cohesion, pass protection and our run game,” Wagner said Tuesday. “Coach Davis has been harping, absolutely harping, about our physicality.

“He pushes us to our absolute limit every day. I’m sure those of you out there heard him yelling and getting after us. Like, it’s what we need, a guy that’s like that to light a fire under us and get us going."

Davis has been vocal during the team's workouts, but it is out of love, Wagner said.

Pittman has stressed to the group that he wants to be confident Arkansas can get a first down on 3rd-and-3 or less by running the ball. Wagner says the group takes that as a personal challenge.

“He’s directly called us out," he added. "It’s what he wants to do, and Coach Davis takes it to heart. We take it to heart. It’s our goal to be a dominant, physical run offensive line. And make sure that is our goal and there’s no doubt when we get into situations like that that we can convert.”

Wagner, who noted that Shane Clenin and Austin Nix are backing up Stromberg at center, said the offensive line has been physical even without full pads.

“It’s been a battle ever since day one,” Wagner said. “In no pads, just helmets, we’ve just been going after it. Shoulder pads are pretty much just added protection for us. That’s kind of the speed we’ve been taking it up front, especially linebackers, too. They’ve been flying downhill. It’s been a heck of a completion so far.

“We’re only four days in right now and, I mean, you’d like to think if you looked at our team that we’re probably (looking) like we’ve been practicing for 100 days."

Wagner is sadden by the fact that fellow right tackle Noah Gatlin opted to retire because of injuries.

“It sucked,” Wagner said. “It really sucked. I felt so bad for him. We talked in the locker room I remember after it happened. That’s the thing behind the scenes that you don’t ever see is the relationship him and I had. I’m going to miss the heck out of him. He was a good kid and just had a really bad break for him.”

It is hoped that Charlotte transfer Ty’Kieast Crawford (6-8, 345) and second-year man Marcus Henderson (6-5, 280) can challenge for spots on the offensive line.

“Ty’Kieast, I love that guy, man,” Wagner said. “He’s hilarious. He’s a funny dude. He’s learning, he’s starting to learn the offense. He’s physical. That’s what you can’t knock him for. He’s physical. He keeps coming along in his playbook. He keeps learning everything.

“But there’s one thing you can’t teach and that’s size, and he’s got it. There’s a lot of things he does out there, especially at 360 pounds. The way he moves is absolutely incredible. It blows my mind how he can do some things."

“He’s come a long way since the fall,” Wagner said. “He’s a highly athletic dude. You’ve seen him, he’s been at tight end a little bit. He came back and played some line now. His game has been progressing. He needs to keep coming along and he’s doing a great job with it.

“Same with (Jalen St. John) and Ray (Curry). They’ve just got to keep their noses down in the playbook and keep working. But all those freshmen, they’re busting their butt. Ty’Kieast and Marcus, too. Those guys, they’re two standouts right there.”

Only one offensive lineman of Arkansas’ 17 is under 300 pounds, a weight that Pittman sees as a benchmark.

“You can’t go out there and try to push someone around, especially in this league, when you’re 270 pounds, 280 pounds,” Wagner said. “You’ve got to be 300-plus pounds to do anything productive in this league. Coach Pittman’s put a very strong emphasis on that, and so has Coach Davis.

“Dang near every time we saw Coach Davis, he was always asking, ‘Hey, what’s your weight at today? What’s your weight at today? Not good enough, not good enough. Make sure you’re eating, make sure you’re eating.’ Just trying to get guys up. The O-line, the guys that were under 300, took it to heart and they’ve done a great job.”