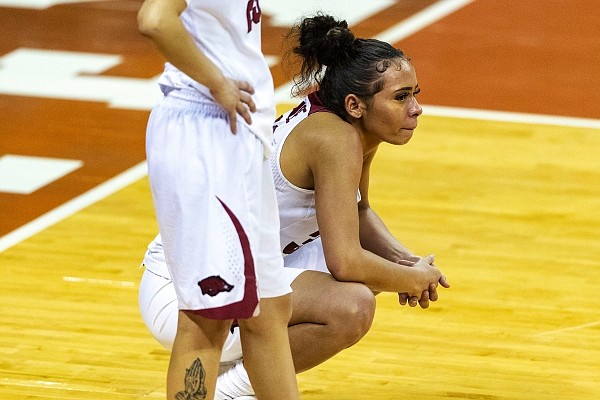 Arkansas guard Chelsea Dungee reacts in the finals moments of Wright State's win during a college basketball game in the first round of the women's NCAA tournament at the Frank Erwin Center in Austin, Texas, on Monday, March 22, 2021. (AP Photo/Stephen Spillman)

University of Arkansas women’s basketball Coach Mike Neighbors didn’t like the first-round matchup with Wright State when the school’s name flashed across the bottom of the television screen a week ago.

The Raiders turned his fears into reality with a 66-62 upset of the No. 4 seed and 15th-ranked Razorbacks in the opening round of the NCAA Tournament on Monday at the Frank Erwin Event Center in Austin, Texas.

Angel Baker poured in a team-high 26 points and also grabbed a team-high 12 rebounds to lead Wright State to its first tournament win in three tries. The 5-8 junior drained a three-pointer with 29 seconds left to give the Raiders a 64-62 lead, which turned out to be the knockout blow for the Razorbacks.

Amber Ramirez misfired on a contested drive with 12 seconds left and Baker came up with the rebound. Jada Roberson then set the final score with a pair of free throws with 8.1 seconds as the Raiders became the seventh No. 13 seed to win in 107 tries in the NCAA Tournament.

Neighbors credited Wright State for outplaying the Razorbacks, who had a nine-game winning streak in the NCAA opening round snapped. The Raiders led for more than 36 minutes.

“Listen, Wright State was clearly the better team from tip to buzzer,” Neighbors said. “They put the ball in Baker’s hands and let her make us wrong, which she did a whole bunch. We can’t get outshot and outrebounded and have 15 turnovers.

“They made us uncomfortable with their athleticism, opened up in a zone, which shows you how poorly I had us prepared. We hadn’t worked on a zone in a couple weeks. Didn’t think they would play it. They did. It bothered us.”

It was Arkansas’ first NCAA Tournament appearance since 2015 and the first opening-round tournament exit for the Razorbacks since 1989.

Arkansas (19-9) led for less than two minutes, but looked like it might escape when redshirt senior Chelsea Dungee drained a three-pointer for a 59-58 Razorbacks lead with 1:51 left. She pushed the lead to two, making one of two free throws with 1:32 left, but Wright State didn’t wilt.

The teams traded buckets as Marquesha Davis gave Arkansas a 62-61 lead with under a minute left. But Baker answered with the backbreaker.

Dungee, the first Razorback All-American since 2004, finished with a game-high 27 points, but relied mainly on free throws as she made 14 of 18. She made 5 of 15 shots from the floor. Makayla Daniels chipped in 11 points, and Ramirez had 9.

An emotional Dungee didn’t have an explanation for why the Razorbacks shot so poorly.

“We’ve had a great year. We’ve won some big games, had some great seasons. I’m proud of this group. I’m so thankful that I chose to come to Arkansas. I can never thank Coach Neighbors and the staff for the opportunity they gave me.”

Arkansas looked to be at an advantage late when Erynn Barnum got a steal seconds after Davis’ bucket. But she ended up losing the ball off her foot and out of bounds.

Neighbors said he thought about calling timeout but decided against it.

“It was our last one,” Neighbors said. “This is going to be a summer of woulda, coulda, shouldas. … Things that happened in the first minute of the game as well as the last minute. That one magnifies because it was at the end. I’m thinking back to the first three minutes of the game when things happened as well.”

The Horizon League regular-season and tournament champions led by as many as 14 in the first half as Baker scored 18 first-half points to help the Raiders to a 38-26 halftime lead. That was a season-low for points in a half by Arkansas, two points less than the 28 it scored in the first half against Ole Miss in the SEC Tournament.

Arkansas used a 9-1 spurt late in the third quarter to get within 44-41. But the Raiders responded with an 8-0 run to push the lead back to double digits on Jefferson’s layup with 7:52 left in the fourth quarter.