Bracket is collateral damage of fun time of year 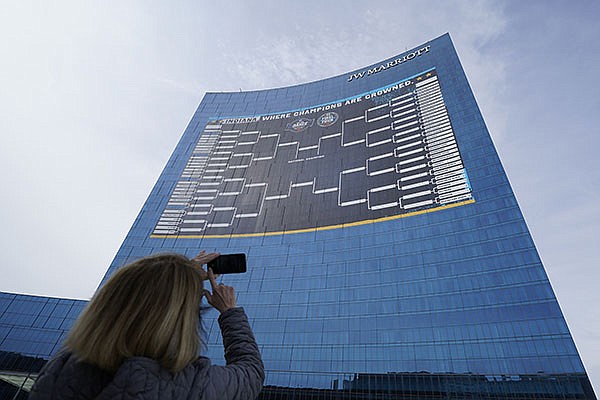 Lisa Moeller takes a photo of the NCAA bracket for the NCAA college basketball tournament on the side of the JW Marriott in downtown Indianapolis. Wednesday, March 17, 2021. (AP Photo/Darron Cummings)

Besides Christmas and Thanksgiving, March Madness is the greatest time of the year.

It has been reported millions of work hours are lost when the games are played on a workday.

Several million people fill out a bracket for an office pool or fill one out like this newspaper offered.

Across the nation, the masses go to CBSsports.com or ESPN.com. The leaders on CBSsports.com are tied for first by garnering 53 points by correctly picking 42 games on the opening weekend.

Two players who currently rank in the Top 25 picked the Arkansas Razorbacks to win the national championship. With millions of players, no doubt more picked the Hogs but the website lists only the Top 50.

After the first day, my bracket was ranked around 225,000. To clear up any confusion, that’s not good.

If you drank the Kool-Aid about the supremacy of the Big Ten this season, you are in trouble.

Ohio State lost in the first round. Yours truly had them going to the Elite Eight.

It was believed Illinois would make it to the championship game where the Illini would lose to Michigan, the only Big Team team that’s actually still in the tournament. The other eight teams are home wondering what happened.

Illinois lost its second game to Porter Moser and Loyola-Chicago, which won’t be a Cinderella much longer if the Ramblers keep winning.

Of course, the school has the most famous fan in the world in 101-year-old Sister Jean, a nun, and the game was played on a Sunday.

Iowa was going to the Elite Eight in my bracket.

When you miss a game on CBSsports.com, the team is marked out in red on your bracket. By the end of the first round, my bracket looked like it had been shot a couple of times by a 12-gauge shotgun at close range.

It was really surprising when my ranking jumped to around the 127,000 mark after the first round.

It was downright shocking that by the time the Sweet 16 had been set my ranking was 75,593, but I only have nine teams in the Sweet 16. And yes, the Arkansas Razorbacks are one of those.

To be honest, predicting games in the NCAA Tournament is another thing yours truly isn’t very good at doing.

I have never won an office pool. In fact, my current ranking on CBSsports.com is my best ever.

While the Big Ten obviously did not crush everyone’s bracket, there have been a record 12 upsets so far. The NCAA considers it an upset if the teams are at least five seeds apart.

Out of the two people who picked the Razorbacks to win it all, one has 12 of the Sweet 16 teams and the other has 11.

They are tied for 16th with 50 points, just three behind the leaders who picked Houston and Gonzaga to win it all.

As bad as my predictions were, it’s been a great tournament, unless you are in the Big Ten.

Our man Richard Davenport, The Recruiting Guy, will be on a Zoom broadcast at 10:30 a.m. April 3.

This is for Arkansas Democrat-Gazette subscribers only, and the slots for participants are limited for this free event.

To register for this feature, which will include a question-and-answer session, go to arkansasonline.com/all-access or call (501) 378-3871.

Davenport is a really nice person, and you will enjoy getting to know him on a more personal level. He takes his job seriously, but he also has a great sense of humor, humility and personality.

Guarantee you’ll come away thinking, what a nice guy.

Davenport has been covering recruiting for the Democrat-Gazette for 14 years.

He also does radio segments on four stations in four cities, including in Little Rock on “The Zone” on 103.7-FM, The Buzz.