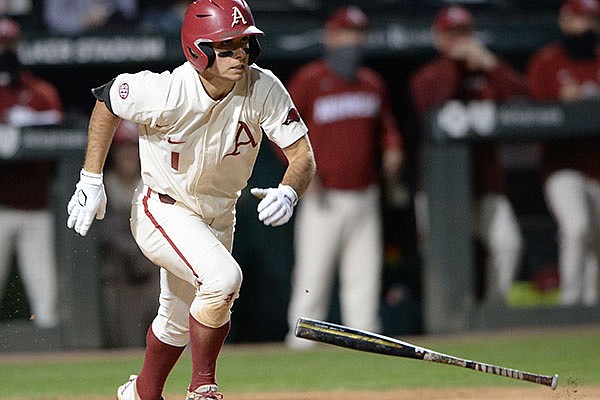 Arkansas second baseman Robert Moore runs the bases during a game against Central Arkansas on Tuesday, March 30, 2021, in Fayetteville.

Moore doubled to the wall in right field in the sixth inning to complete the cylce in his fifth plate appearance. He recorded the feat the night before his 19th birthday.

Moore became the first Arkansas batter to hit for the cycle since Kyle Harris did it during a game at Tennessee on March 27, 1994.

Moore's three-run double prompted a pitching change and he was able to celebrate the accomplishment with his teammates. The Razorbacks led the Bears 19-8 at the time.

Moore reached base in all six of his plate appearances Tuesday. He was hit by a pitch in the seventh inning. He recorded a career-high 6 RBI.