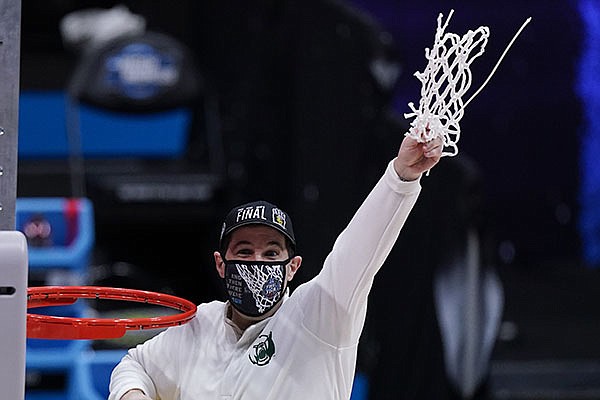 Baylor punched its first ticket the the Final Four in 70 years, but it didn’t come without a fight.

MaCio Teague had a game-high 22 points and Arkansas’ cut an 18-point first-half deficit to four points after intermission, but the top-seeded Bears regained control late and grabbed an 81-72 victory over the Razorbacks in the Elite Eight of the NCAA Tournament on Monday in Indianapolis.

The win over one former Southwest Conference sends Baylor to play another, Houston, in the Final Four.

Baylor coach Scott Drew finally broke through in the Elite Eight after losing to Duke and Kentucky in previous attempts.

“Been to two Elite Eights before and seen Duke celebrate and win a national championship, Kentucky celebrate, win a national championship,” Drew said. “It's nice that these guys were able to celebrate especially, after last year when we were on the verge of having the first No. 1 seed in school's history and not having a chance to compete in the NCAA Tournament (because of covid-19).”

The Razorbacks, who had rallied from double-digit deficits in its first three tournament games, cut it to 64-60 with 7:34 left on Moses Moody’s two free throws.

Teague, a transfer from North Carolina-Asheville, then hit a mid-range jumper and two three-pointers that steadied Baylor and helped fight off Arkansas. The Razorbacks missed 12 consecutive field goals over an eight-plus-minute stretch late in the second half.

“We've been in the fire before,” Teague said. “It's not our first time in the fire. We just gotta continue to compete at a high level. Arkansas, they've got a good bunch in there in their program, a lot of older guys. So, we knew they wouldn't give up as well.

‘They also have young guys on their team. But I feel like they have a lot of older guys and when you have older veterans on the team, like, it comes with good leadership and they're not going to allow the young guys to quit. They've got a lot of fight in them.

“We knew they were the comeback kids, came back from 14, 10 and 12 in their first three games. We just tried to seal them off.”

Drew noted his team was able to keep it lead in the first half without former Auburn player Davion Mitchell, who picked up three first-half fouls.

“And then second half we knew they were going to make a run at us because that's what they do,” Drew said. “That's what any team in the Sweet 16 and Elite Eight will do. They're well-coached and they don't want to go home either.

“Credit our upperclassmen for not panicking. I thought every time they made a big play, our guys really answered. MaCio's big three, Adam (Flagler) big three. Davion getting to the cup.”

Drew thought the fast start from his team was a tremendous factor.

“I thought it showed how focused and ready to play we were,” Drew said. “And we got great looks. Guys made good shots. And Arkansas is a great team. We knew they'd make a run, and they did. And credit our guys for having an answer.

“But I really thought we were focused from jump and really had a good game plan. And credit them for adjusting. They didn't trap as much because we were hurting them on that for a minute there. And then they got in a set, a horn set that really hurt us.

“And again, when you're playing a team in the Elite Eight you know it's going to go down to the wire. And just happy our guys had the last answer.”

Moody, the SEC freshman of the year, had 11 points and made 2 of 10 shots. Mitchell was tasked with guarding him.

“With Moody, first of all, we just tried to make everything as tough as possible,” Drew said. “Third-leading scorer in the SEC, he can get buckets in a hurry. Thank goodness we played good defense and had great attention on him, tried to make things tough.

"As far as Davion, you saw in the first half, he played only eight minutes. You saw at the start where we were able to get to. Where he's so critical for us is — I mean, he's final four for defensive player of the year. And, obviously, I think he's the best defender in the country.”