Ramirez will return to Arkansas for 2021-22 season 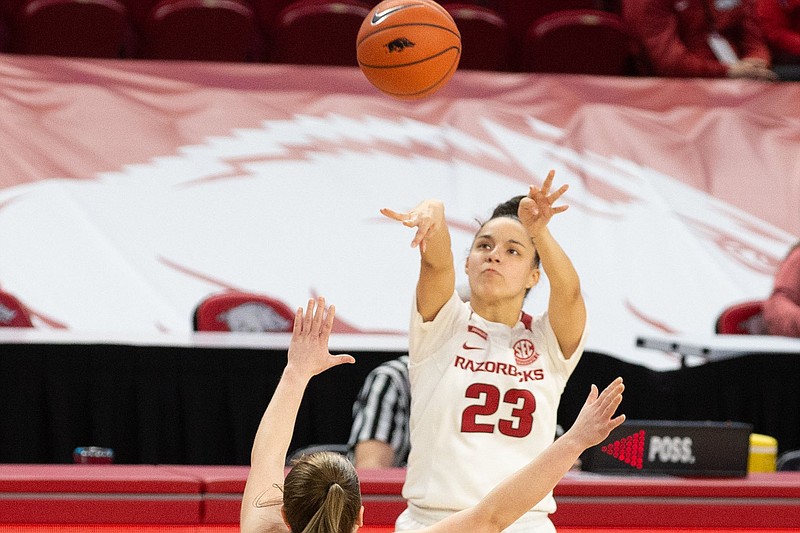 Arkansas guard Amber Ramirez (23) shoots during a game against Alabama on Sunday, Feb. 28, 2021, in Fayetteville.

FAYETTEVILLE — Amber Ramirez will finish her college basketball career as a Razorback.

The 5-9 redshirt senior from San Antonio announced on her Twitter account late Tuesday afternoon that she will return to Arkansas for her final season of eligibility in 2021-22.

All winter-sport athletes were given an extra year of eligibility by the NCAA because of the pandemic.

The other six Razorback seniors decided to go in different directions over the past week after Arkansas was upset 66-62 by Wright State in the opening round of the NCAA Tournament a week ago.

Chelsea Dungee and Destiny Slocum both made their intentions known to enter the upcoming WNBA Draft. Jailyn Mason, Macy Weaver and Taylah Thomas entered the transfer portal, while Grayce Spangler said her basketball career is finished, via Twitter.

She exploded for a career-high 35 points in the Razorbacks’ win over Alabama on senior day in Bud Walton, including 8 of 14 from three-point range. That was just one off Wendi Willits’ single-game record.

She has put together two of the best seasons in Razorback history for a long-range shooter, after transferring from TCU.

Ramirez broke Willits’ single-season record for three-pointers made when she hit 106 last season. That record had stood for more than 20 years.

Ramirez ranked second in the NCAA in three-pointers made and ninth in three-point percentage (.447). That percentage is a program best. She now owns two of the top three long-distance shooting marks in program history.